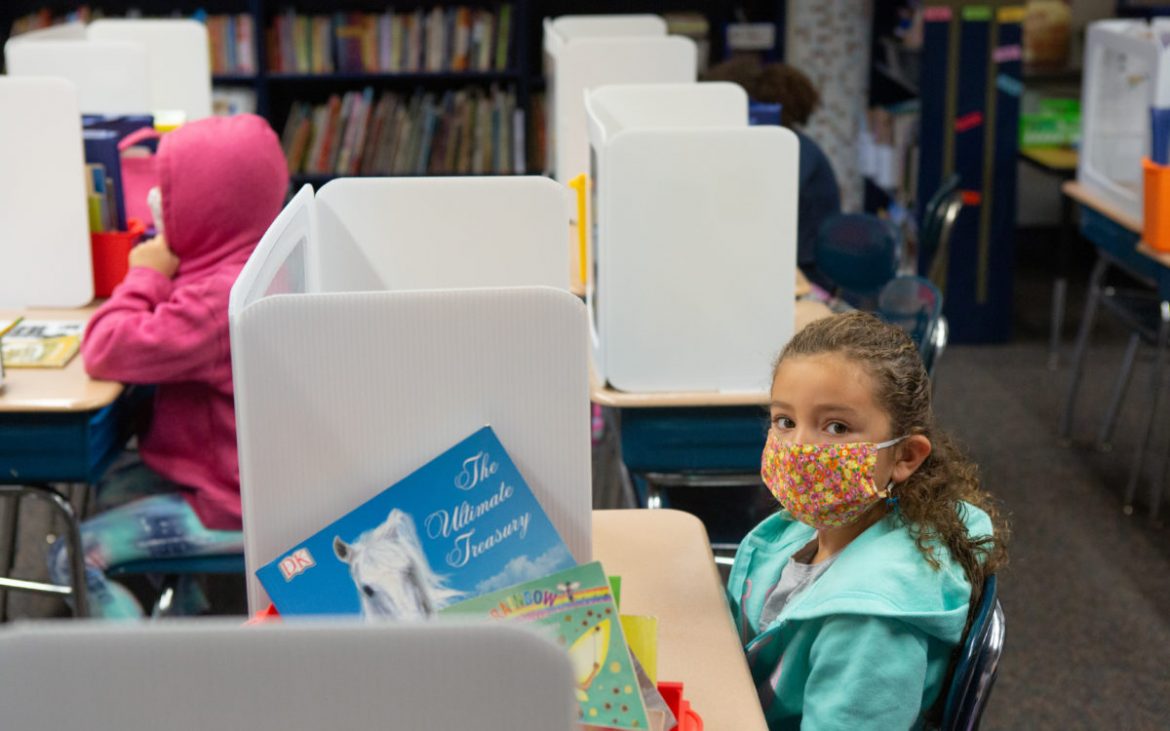 In a significant departure, the California Department of Education is withholding the release of the results of the Smarter Balanced tests that students took last spring until an undetermined date later this year. The result will be a monthslong delay before the public can view results in English language arts, math and science for the state, districts, schools and charter schools.

The denial of EdSource’s request to release test score data comes at a time when educators are concerned about the pandemic’s impact on reading and math progress, especially in the early years. Releasing scores “later this year” means that the public will learn about spring test results for third-graders who are now well into fourth grade.

The California Department of Education told EdSource that it is withholding the scores now, so they can be simultaneously released with other data for the California School Dashboard, such as student absentee rates, suspension rates and rates of chronic absenteeism. The dashboard provides a detailed look at school and district metrics, broken down by student demographic groups. The data is used to determine which low-performing districts require state assistance.

The state has not said when it plans to release the updated dashboard, but if it is released after Nov. 8, the Smarter Balanced results won’t surface as an election year issue – both for local school board races and for State Superintendent of Public Instruction Tony Thurmond, who runs the California Department of Education and is facing re-election this year. Thurmond did not comment on the test scores release date. That updated dashboard has been released between November and January in past years.

Mary Nicely, chief deputy state superintendent for instruction, said that the state board set the goal in 2017 for a comprehensive approach that would include combining the release of state test scores and other metrics with the updated dashboard. “We are on track to release the data as we did last year. If we can come out sooner, we will,” she said.

“We are not withholding anything; people are working hard to finalize the data.”

Thurmond opponent Lance Christensen, when notified by EdSource about the state’s refusal to release the scores, said, “The fact that the department is not willing to publish now suggests that scores will be lower and the current state superintendent does not want to be held accountable for the results.”

The state refused to release the test score results to EdSource despite an Aug. 5 letter to districts, county offices of education and charter schools telling them the results were “not embargoed” and they “are encouraged to use their results for local planning, including public meetings with their local governing board.”  Maria Clayton, director of communications for the California Department of Education, repeated in a Sept. 1 email to EdSource that the results were “not embargoed.” Districts have provided scores of individual students to parents, and several districts, including Los Angeles Unified and Palo Alto Unified, have released their results to the public.

EdSource, through its attorney, sent a letter to Education Department officials Wednesday requesting immediate reversal of that denial.  “EdSource considers delay tantamount to denial as it effectively robs the public of its vital role in overseeing the CDE and individual districts and in holding both accountable to its students and the public. This is especially important during what continues to be one of the most challenging and impactful times to our educational system due to the COVID pandemic,” wrote EdSource attorney Duffy Carolan, of the law firm Jassy Vick Carolan.

The five-page legal analysis challenged CDE’s decision to withhold the test scores “…the CDE cannot identify any ‘public’ interest in non-disclosure that could justify its denial position, let alone an interest that ‘clearly outweighs’ the substantial public interest in access to this information.”

Earlier this month, EdSource filed a request under the California Public Records Act, with the California Department of Education for the 2022 results, including the breakdown by student groups. EdSource has annually analyzed the data, so the public can look up a school’s scores and how it compares to other schools. The last full year of results is for the 2018-19 school year.

“The state can’t talk out of both sides of its mouth” by giving districts data that shows their test results and then refusing to release the overall data set, said David Loy, legal director of the First Amendment Coalition, a San Rafael-based open government group.

“There are no exemptions in the law that allow the government to withhold records from the public because they are “inconvenient or embarrassing,” he said.

Since California first released Smarter Balanced scores in 2015, the Education Department has consistently released them separately and sooner than the other dashboard data. Dates ranged from the last week in August through the first week in October. The exception was the 2020-21 school year, when results were released in January 2022 with dashboard indicators. Because of the pandemic, districts had a choice of giving local assessments or the Smarter Balanced tests; districts with enrollments totaling fewer than a quarter of the state’s students chose that option and the resulting data was “limited in both scope and use,” the department said in a news release at the time. No test was given in 2019-20 because of the pandemic.

Janet Weeks, director of communications for the State Board of Education, said that the board agreed that the Smarter Balanced results would be released simultaneously with the updated dashboard.

In its Sept. 12 denial, Clayton said the data was not yet ready for release because it “is still undergoing a review and validation process by the CDE and the local educational agencies.” A premature release of statewide results “could mislead researchers, policymakers and the general public” and “thus be detrimental to the public’s interest.”

Especially this year, pushing back disclosure has ramifications. Based on national data, the National Assessment of Educational Progress, and the results of Los Angeles Unified, which did release its 2022 scores this month, the results are expected to show record declines, compared with pre-pandemic 2018-19.  Research has shown that student learning was affected by remote learning followed by a chaotic year under Covid. Districts are getting historic levels of state and federal funding to bridge the gaps.

“Delaying this data threatens to hinder engagement as well as the effectiveness of the investments the state has made in recent years, including funds to address impacts of the pandemic.”

There is an imperative to respond expeditiously, said the Center for Reinventing Public Education in a report issued this month. “The academic, social, and mental-health needs are real, they are measurable, and they must be addressed quickly in order to avoid long-term consequences,” lead authors Robin Lake and Travis Pillow wrote.

Waiting until later this year to release how students scored last spring will delay needed public discussions on how districts should respond to serious setbacks in learning including shifting funding immediately and next summer to accelerate learning. The timing is especially troubling for educators in early literacy, as the state copes with a reading crisis. Only 48.5% of third-graders tested at grade level or above in English language arts during the 2018-19 school year, before the pandemic stalled all learning.

“As the largest public school district in California, Los Angeles Unified urges the state of California to expedite the full release of test scores annually to inform the community and enable the district to take immediate action to meet the needs of our most vulnerable, at-risk student populations,” said Superintendent Alberto Carvalho when releasing district data on Sept. 9.

Parents and districts also benefit when they can compare their own scores with statewide and surrounding district and charter school results, said Christensen. “Districts want to get information from other districts — to who is doing what and, seek out best practices,” he said.

Gilbert Magallon, spokesperson for Central Unified School District in Fresno, said comparing results is useful.  “We value receiving data on similar districts and seek to learn information that may be beneficial as we strive to improve students’ academic outcomes.”

Palo Alto Unified released partial results of Smarter Balanced results — for third grade English language arts  — in a report to the community on Sept. 9 showing impressive gains for all student groups. The rest of the results will be released this week, said Superintendent Don Austin.

“Since early literacy was our predetermined goal, it made sense,” Austin said. “Our math scores do not look as strong. We don’t have any context for the scores across the state.”

“Without seeing the scores for everyone, we are guessing if our scores were good, bad or in between,” Austin said.

Getting scores out as soon as permissible is not only sound policy but, civil liberties lawyers say, is required by the state law governing the release of public documents, the California Public Records Act.

Since the Aug. 5 letter to districts, the department also has sent contradictory messages, telling districts not to publicly release the scores; a few districts contacted by EdSource have presented them to their boards, and others said they plan to do so in October.

On Sept. 15, EdSource sent a Public Records Act request to the state’s 30 largest districts, requesting their Smarter Balanced results. Besides Los Angeles Unified, which already had released a summary of its results, only two districts so far have responded with scores: Sacramento City Unified and Lodi Unified. As with LAUSD, the scores showed significant drops in math and English language arts compared with 2018-19.

After receiving the EdSource request, Anaheim Union High School District contacted the California Department of Education. The response from the ETS’ California Outreach Team on behalf of the department was unequivocal: “The embargoed results are for LEA (local educational area) use only; they should not be shared with the public. The public release of the data is going to be available later on this year.”

Districts have also received communications from the department that data remained in a preliminary/draft status for districts, and statewide data is not yet final. Kelly Avants, the spokesperson for Clovis Unified School District, said Clovis interpreted that as “the data should continue to be treated as embargoed.”

She said the district is planning a public workshop in November when the data will be public.