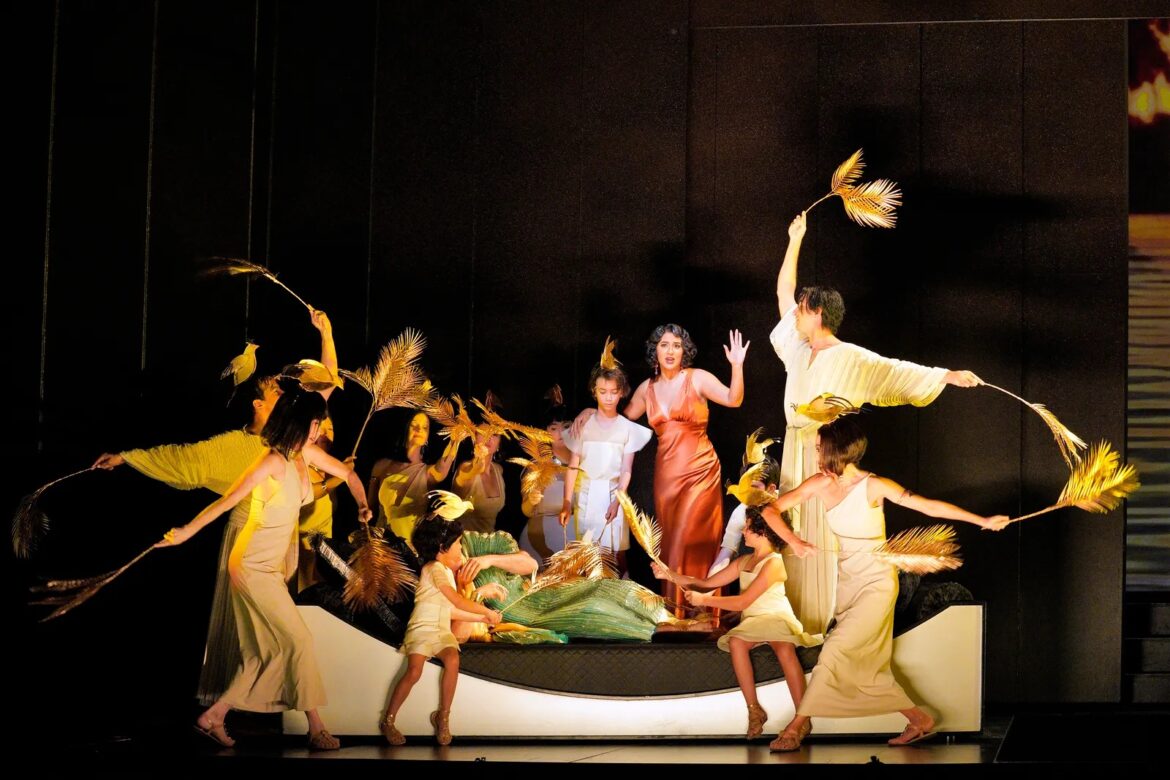 When San Francisco Opera commissioned Berkeley composer John Adams to write an opera for its hundredth season, Adams went to Shakespeare for inspiration and chose one of the fieriest love stories of all time, “Antony and Cleopatra.” Passion and the clash of ancient civilizations — love and war — the stuff of which great opera is made.

Adams’ score for the new work that premiered this month is most powerful when it deals with the love between Egypt’s Queen Cleopatra and Rome’s General Antony, somewhat less dramatically on point when dealing with politics and rivalries, but the thrill of the work is that it marries Adams’ music to the musical language of Shakespeare in such a way that it drives with glorious colors and dramatic intensity to the final curtain without a lapse. Music director Eun Sun Kim’s conducting is all but flawless, joyful and authoritative at every turn, particularly in the complex interludes.

Adams, stage director Elkhanah Pulitzer and dramaturg Lucia Scheckner in putting together the libretto have added a few scenes and texts from other sources and eliminated some characters altogether to shed more light on the principal figures. The text they have produced is concise and easy to follow. Frequent references to the long poetic lines flashing above stage are a must, to be sure, even with sound enhancement.

Soprano Amina Edris’ beautifully focused and forceful voice projects a queen not easily moved, but her feelings for Antony round her portrayal with softer vocal colors. Baritone Gerald Finley partners her well, vocally and dramatically presenting both a lovesick noble and a military figure enraged by his weakness and failing military prowess. In the first few moments of the opera, their illicit union is musically probed, described and indelibly on view.

One can suppose that Egyptian-born Edris, who took the assignment when Julia Bullock had to withdraw earlier in the summer, knows a thing or two about her birth country’s famous females, pharaohs and queens. She dresses her music with gleaming colors and compelling theatrics. We may miss set pieces, such as “Batter My Heart” or “Am I in Your Light?” from “Doctor Atomic,” to name one of Adams’ recent works, as Adams’ signature pulsating music charges through to the finish.

Tenor Paul Appleby as Octavian (soon-to-be Caesar Augustus) doesn’t make a big impression initially but comes into his own with his Act 2 empire presentation, surrounded by huge, leering projections of his face, while the Opera Chorus (potent under its new director John Keene) sings onstage. Making strong showings in supporting roles are Alfred Walker as Enobarbus, Taylor Raven as Charmian and Hadleigh Adams as Agrippa.

“Antony and Cleopatra,” a co-commission and co-production with the Metropolitan Opera and Liceu Opera Barcelona, has five more performances in San Francisco through Oct. 5, and this Sunday’s 2 p.m. performance will be livestreamed as well. Tickets for the live show, $26-$450, and the lives