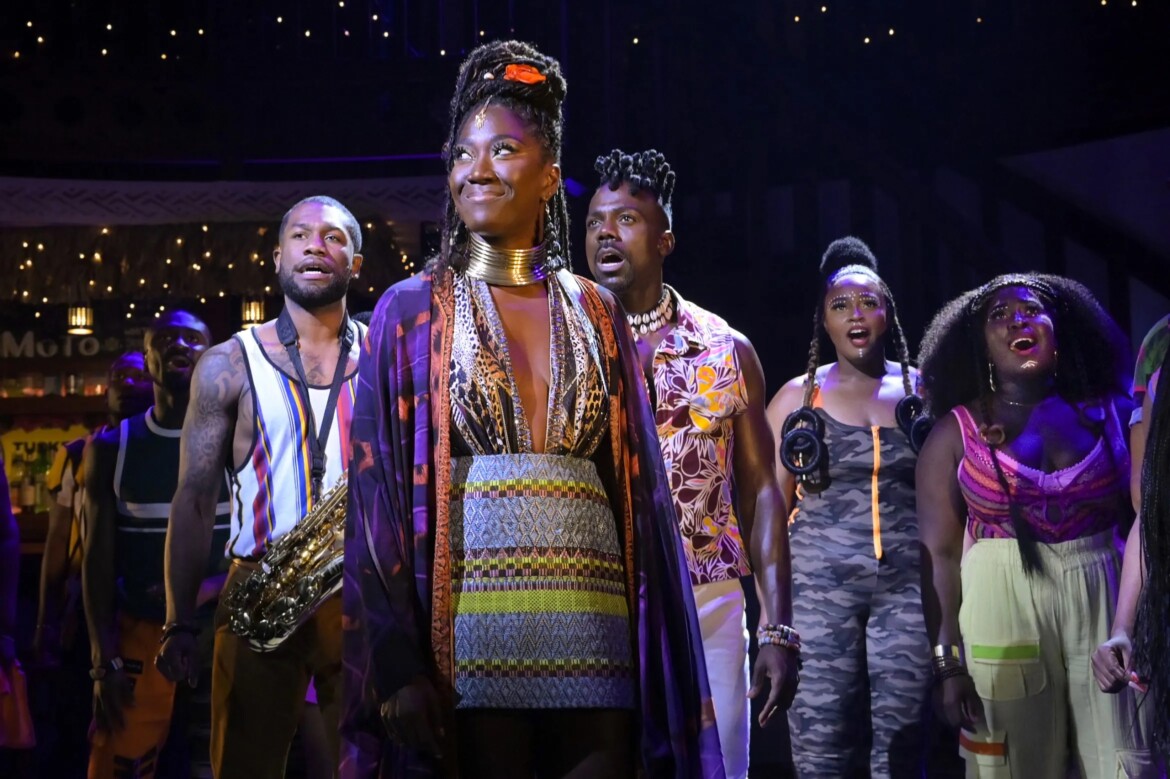 Amber Iman, foreground, plays Nadira, a deity posing as a nightclub singer, in "Goddess," a musical based on a Kenyan myth. (Photo courtesy Kevin Berne and Alessandra Mello/Berkeley Repertory Theatre)

“Goddess,” now having its world premiere at the Berkeley Repertory Theatre, adapts a Kenyan myth to modern times to chronicle the search for self-fulfillment, as it at the same time highlights African music and dance. In both aspects, it is buoyant, joyful and uplifting, musical theater at its best.

Omari (Phillip Johnson Richardson), scion of a politically powerful family, returns to Mombasa, Kenya, from studying political science in New York, intent on following his forebears’ footsteps by becoming the mayor of the city. His family, and particularly his mother (Kecia Lewis) and fiancee, CheChe (Destinee Rea), are hell-bent on seeing him rise to power: his mother by an invocation of tradition, his fiancee reliant on status and power.

But after meeting Nadira, a mysterious, beautiful stranger (Amber Iman) at the Moto Moto Afro-jazz nightclub which he frequents, Omari wavers in his pursuit of the mayoral position and his plans to marry CheChe. He opts for Nadira and the saxophone instead.

Nadira, too, has arrived from afar, in her case, from the heavens, where she reigns in Kenyan myth as goddess of music. Having removed herself from the clutches of her unloving mother, the goddess of evil, Nadira searches for love, which she has never experienced, among mortals in the jazz club, where she displays the incredible nuanced range and power of her voice.

When Nadira and Omari finally shed their pasts for a future together, a complication arises, which upends their plans. Nonetheless, “Goddess” ends in exuberance, as everyone is comfortable with the outcome — even CheChe, the traditional jilted bride, who, with a knowing wink toward an outdated outcome, is elected mayor in Omari’s stead.

The draw of Moto Moto to its regulars extends equally to the Berkeley Rep audience. Ahmed (Rodrick Covington) is the club’s vibrant master of ceremonies, dancing his way to successfully wooing the club’s manager, Rashida (Abena), who clearly reminds the head-over-heels Ahmed of her views of their upcoming marriage.

With moves choreographed by Darrell Grand Moultrie, the electric, sensuous dancers are riveting every time they claim the stage — whether the dance style is traditional African, modern or hip-hop. The stage, designed by Arnulfo Maldonado, with its wooden staircase and elaborate railing, reveals doors with fabric ornamentation and serves as a sinuous route for theatrical emphasis. And the costumes by Dede Ayite range from the dancers’ street wear to Nadira’s flowing, regal gowns, all of it visually stunning.

“Goddess” is the result of a long-term collaboration and a unity of vision between its playwright, Jocelyn Bioh, director Saheem Ali, who also conceived the show, and Michael Thurber, composer, lyricist and arranger, all of whom have extensive theatrical experience. Ali, as associate artistic director of the New York Public Theater, previously worked with Bioh on her 2021 adaptation for the Public Theater of Shakespeare’s “The Merry Wives of Windsor,” as did Thurber.