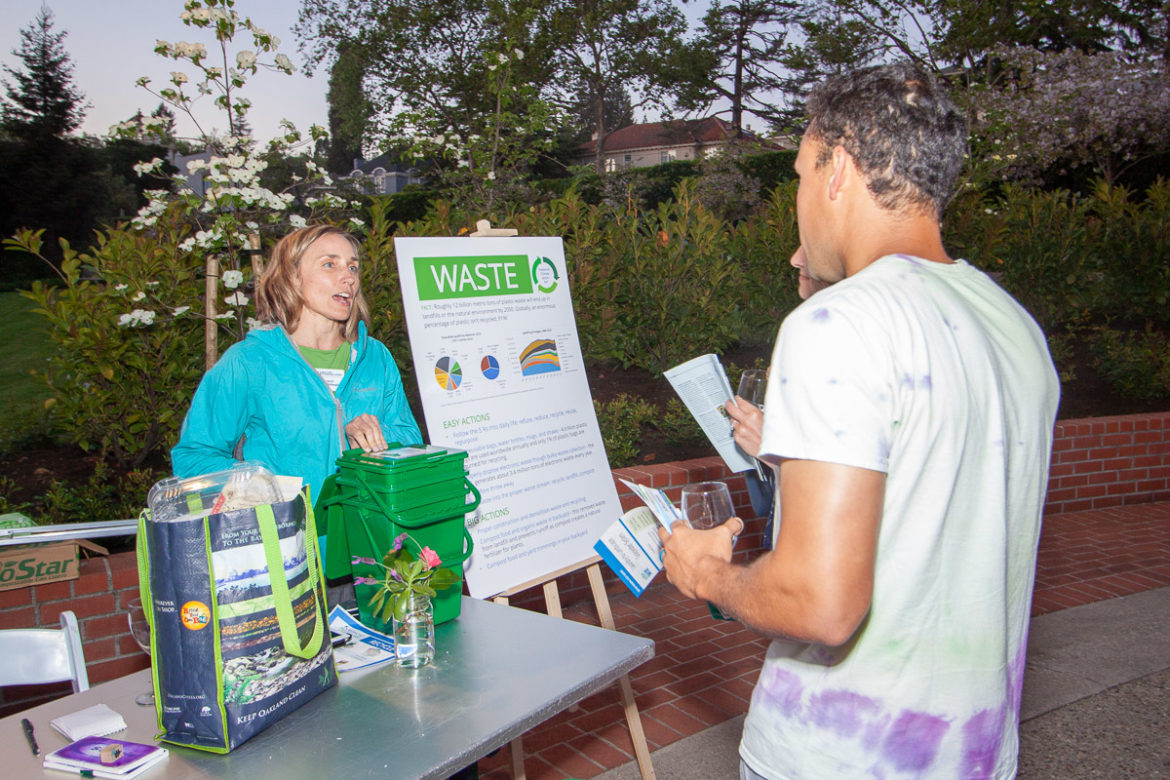 Laura McKaughan with Piedmont Evergreen talking recycling with a resident at the April 2019 Climate Action Fair.

From a City of Piedmont press release on Sept. 13:

The City of Piedmont has been awarded the Institute of Local Government (ILG)’s Beacon Spotlight Award for Sustainability Best Practices at the Platinum level.

The Spotlight Award recognizes sustainability actions that go above and beyond state mandates, highlighting creative and local solutions for addressing climate sustainability in ten areas, including energy efficiency and conservation, green building, and waste reduction.

Climate action is a demonstrated priority for Piedmont’s City Council. Since the City’s first Climate Action Plan was adopted in 2008, the Council has worked diligently to bring a sustainability lens to city operations. Under the leadership of Mayor Teddy Gray King, the City Council has shepherded several recent notable initiatives which drove
Piedmont’s platinum level recognition:

• All-Electric Community Pool: In 2022 the City Council directed the design of the Piedmont Community Pool as an all-electric facility. Piedmont will be one of the first cities in California to support heating large commercial pools with electricity. This project represents a market transformation model for the rest of the state and beyond. Additionally, the accompanying pool facility will be the City’s first LEED Certified Building.

• Compost Giveaways: As part of implementation of Council’s adoption of waste reduction and recycling efforts associated with SB 1383, free bi-monthly compost giveaways for residents have distributed over 85 cubic yards of compost since September 2021.

The Council and staff are continuing their efforts to make Piedmont a leader on climate action. Currently, the city is working toward fleet electrification, developing a Sustainable Parks Plan, and piloting a home electrification rebate program to support residents looking to green their properties.

“I’m so proud that Piedmont is being recognized by our peers for leadership in environmental stewardship,” said Mayor Teddy Gray King. “As mayor and as the former chair of the Environmental Task Force, I can say with certainty that our town’s consistent commitment to sustainability is unparalleled. From greenhouse gas emissions to water
use to household electrification, the City of Piedmont is now a regional leader in environmental policy.”

Piedmont’s Platinum Spotlight award was recognized at the League of California Cities Annual Conference in Long Beach on Thursday, September 8. This is the second consecutive year Piedmont has been recognized by the Beacon Program. In 2021, the City received a Gold level Spotlight award for reducing greenhouse gas emissions within city facilities by 12% from 2010 to 2019, a Platinum level award for reducing community-wide greenhouse gas emissions from 30% from 2010 to 2019, and a Gold level award for sustainability best practices.

Residents can stay informed about the Piedmont’s sustainability work by subscribing to the City’s Climate Action email newsletter and learn about simple, everyday actions to combat climate change by visiting piedmontclimatechallenge.org. Please contact Sustainability Program Manager Alyssa Dykman at adykman@piedmont.ca.gov or (510) 420-3058 with questions.