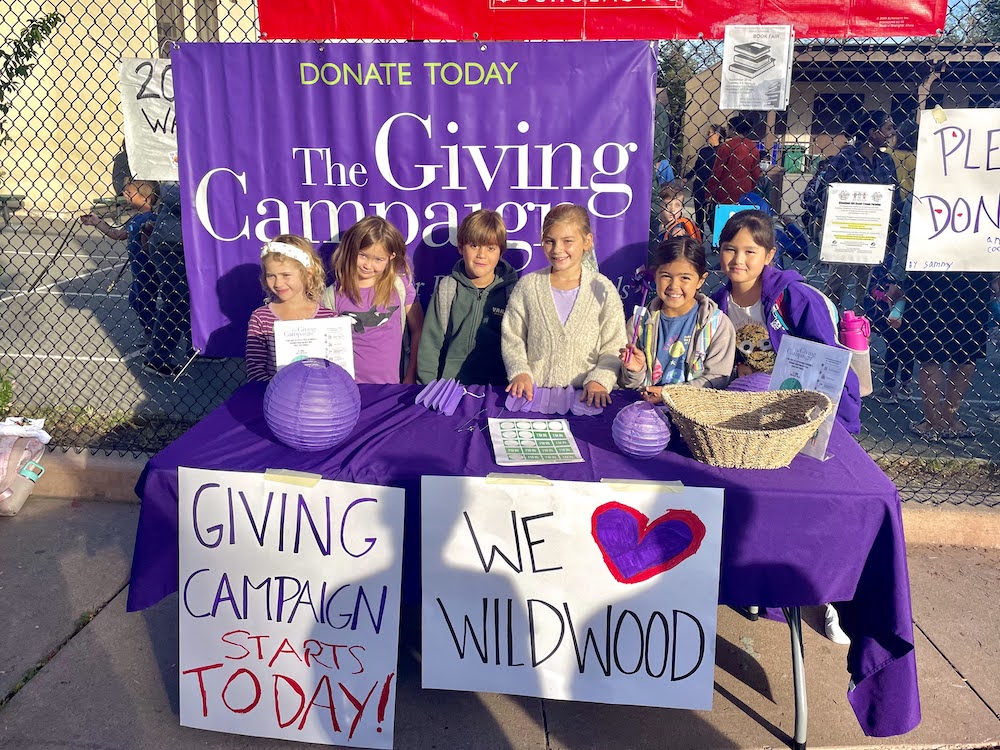 Wildwood students rally for their school on the first day of the Giving Campaign.

The arrival of fall colors once again brings the traditional Giving Campaign launch day celebration for Piedmont schools. On Tuesday, September 20, students, schools, and the Piedmont community all showed their strong support for the campaign, wearing eye-catching “I’m In” stickers and making purple the theme of the day.

This year, the Giving Campaign chairs also added a pop-up popsicle party at Beach Elementary. “We wanted to make sure families who weren’t within walking distance of the park also had the chance to join the fun,” says Giving Campaign co-chair Katie Sharafi. As in past years, Mulberry’s Market donated the frozen treats.

The day ended with a reception for new-to-Piedmont parents hosted by the Giving Campaign team at the Community Hall courtyard.

This year’s campaign chairs are Dana Murray, Julia Ruthven, and Katie Sharafi, supported by the amazing team at the Piedmont Education Foundation and a dedicated group of volunteers. Over a marathon few months, this team will work tirelessly, putting up banners at the schools, conducting community outreach, writing personal letters, and making phone calls, all in service of Piedmont’s students.

“We start planning the next Giving Campaign as soon as the current one ends,” says PEF executive director Heather Frank, “The messaging, outreach, events, and materials represent months of work from the office team and dozens of volunteers.”

A nearly unprecedented California budget surplus has provided a one-time infusion of additional funds for the coming school year, allowing the Giving Campaign to reduce the requested per-child donation from prior years. This year, the team asks that families donate the $1,980 gap for each of their children in Piedmont schools. “Even when the state has a surplus, there’s still an enormous funding gap that needs to be filled by the community,” says Sharafi. “Although we are asking for less this year, a large unfunded need remains.”

The requested amount will help cover the difference between what the district receives from other funding sources and the cost of providing the quality of education that students receive here in Piedmont. “We are asking for less per student but working to have increased participation rates this year,” says Sharafi. “We want everyone to participate and hope families will give a gift that is meaningful to them, whatever level they choose.”

Last year’s record-breaking Giving Campaign raised an incredible $3.7 million for Piedmont schools. “Last year’s campaign saw unprecedented fundraising as parents and community members dug deep, but overall participation was still down from pre-COVID levels,” says Frank. “We want everyone to understand that participation matters. We’re extremely grateful when families are able to give the gap or more, but a donation of any amount makes a real difference for our schools.”

The funds from the Giving Campaign will keep Piedmont class sizes small and fund a broad array of student needs, from wellness to classroom aides to libraries and the arts. “I’ve always seen our family contribution to the Giving Campaign as an investment, not a gift,” says Sharafi. “You really do see the return on that investment in the caliber of the teachers and staff, the access to subjects like art and music, and the outstanding education our kids receive here in Piedmont.”

To learn more about the Piedmont Education Foundation’s Giving Campaign or to give, please
visit www.piedmontedfoundation.org.