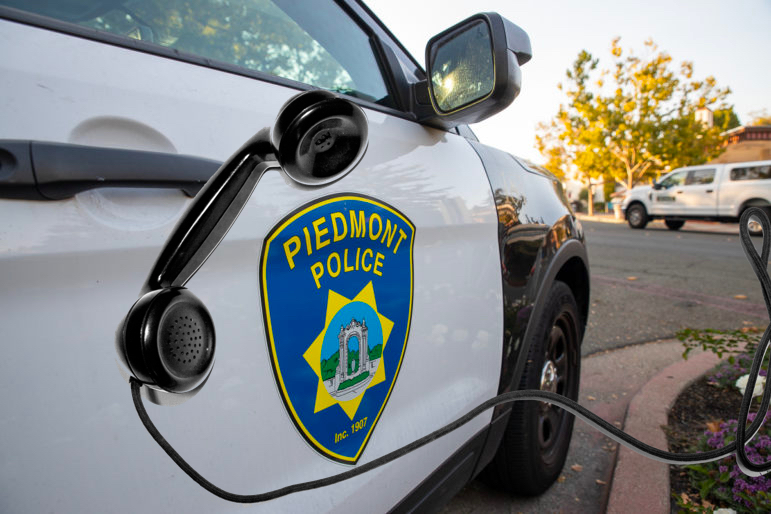 Two criminologist consultants told the City Council Monday night that a study of five years of Piedmont Police Department “calls for service” shows there may have been some racial biases in how officers and community members initiated calls, but cautioned that the study data is imperfect, and that no firm conclusions should be drawn from them.

“There’s no evidence of a systematic problem as to who police are stopping,” said Dr. Michael R. Smith, one of two University of Texas at San Antonio criminologist/researchers who compiled a report commissioned by the city in July 2021 to determine whether there are different or better ways to respond to such calls in the future.

The report was commissioned in response to national conversations about policing and bias in the aftermath of the killing of George Floyd in Minneapolis in May 2020.

Though this report’s findings are far from definitive, Police Chief Jeremy Bowers said this report is only a starting point.

“There’s a big-picture aspect to this; this is really the beginning of a conversation and an analysis … of how we’re doing business,” he said.

A more definitive recommendation from Smith and fellow researcher Dr. Rob Tillyer was that the small Piedmont Police Department likely doesn’t respond to enough calls involving people suffering mental health crises to hire a mental health worker, or perhaps even contract for one.

“It is probably not economically advantageous for your city to do that,” Smith said, noting that only about 85 calls, of some 30,000 analyzed as part of the report, were considered mental health calls.

The UTSA study was commissioned as part of a broader city effort to evaluate its various operations, policies and procedures “through an equity lens,” an ongoing campaign by the city to make Piedmont – 70 percent of its residents white – a more welcoming place for all groups.

The City Council has, in the past two years, been assertive in working to make Piedmont a more welcoming city for all groups, and bringing more equity to local law enforcement has been a key segment of that.

In July 2021, the Piedmont City Council unanimously agreed to spend $50,000  on this study of the “calls for service” Piedmont police officers have responded to over 30,000 calls between Jan. 1, 2017 and Dec. 26, 2021. Police Chief Jeremy Bowers sought, and got, an examination of potential “bias by proxy” in Piedmont, whether there have been “disproportionate contacts of non-white civilians by the police as the result of calls from the public” that aren’t necessarily tied to a specific criminal behavior. The report also analyzed how often the police had gotten “bias-based” calls for service from the public.

“Bias by Proxy” is defined as when someone calls the police and makes false or ill-informed claims of misconduct based on explicit racial and identity profiling or implicit bias.

Overall, the study indicated that, for the most part, the Piedmont police officers stopped and arrested various racial groups at rates that closely matched the racial composition of suspects described by callers and in official police reports.

These comparisons show “moderate underrepresentation” of white people in police-initiated actions compared to suspect descriptions provided by civilians, and relatively close alignment among the data source comparisons for Blacks and Hispanics. Asian civilians were significantly over-represented among those stopped and arrested compared to caller-identified suspects in suspicion and burglary/theft calls.

In their report, Smith and Tillyer reported that participants in three separate community focus groups last September believed the Piedmont Police Department “does not regularly engage in bias-based policing,” although there was acknowledgment that police have received calls about “young, non-white persons in their neighborhoods who did not appear to be Piedmont residents.”

The study included three resident “focus group” sessions over Zoom, involving five to seven people each. Those participants Smith and Tillyer spoke with had varying views on police response to calls for service based at least partly on race:  “I think we’ve learned to be, you know, very subtle in what we say when we call the police, but I think that happens a lot,” one participant said.

The report says that while many focus group participants said calling the police about “suspicious” minority group members is undesirable, some said it is nonetheless commonplace in Piedmont.

There also were diverging views within those focus groups as to whether Piedmont police should respond to “suspicious person” calls without being tied to a specific behavior “indicative of a crime or public safety concern.”

Focus group participants also expressed reticence about police responding to most calls from local schools. One participant said,  “Most of the school calls can be handled by somebody with a health and wellness perspective and grounded in that framework rather than law enforcement.”

All that said, both Smith and Tillyer stressed that collecting the data for this report proved more difficult than expected, because of problems extracting computer-aided dispatch (CAD) information. The rigorous evaluation of “disproportionate stops and stop outcomes (e.g., arrests)” requires data that were unavailable to the UTSA research team, the report said, and that such an evaluation was outside the scope of their work.