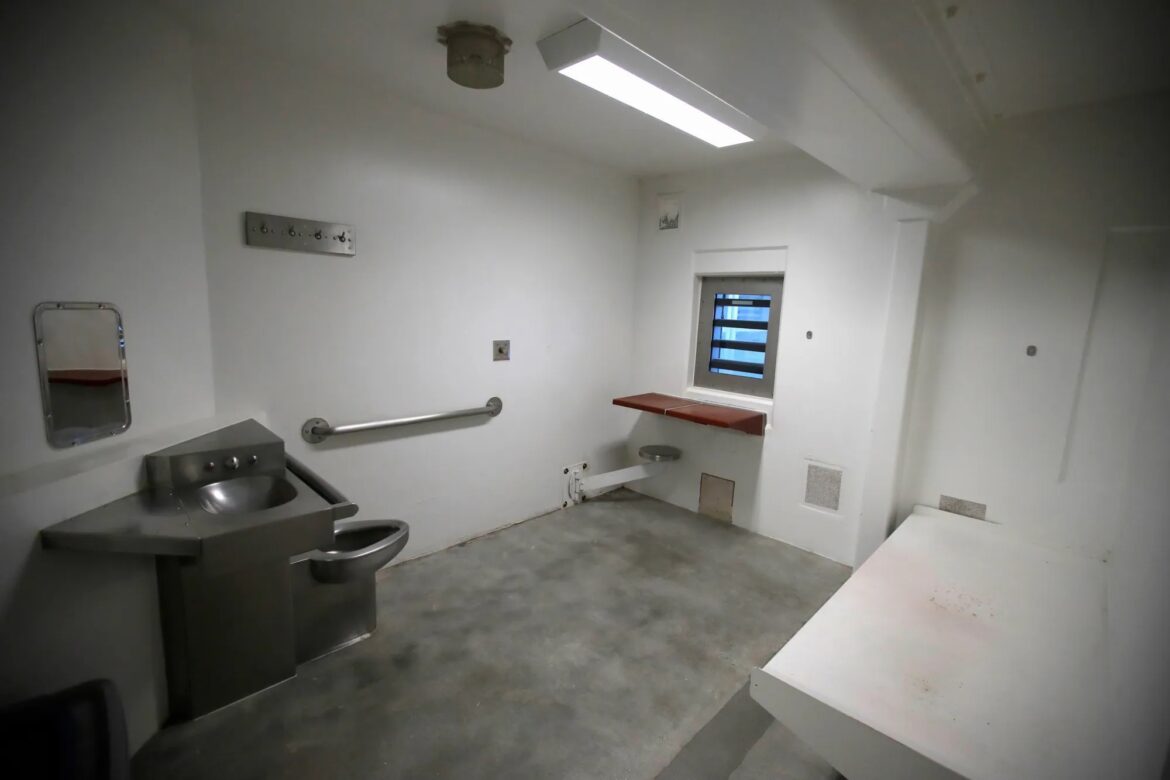 In solitary confinement, a former California inmate recalled, there were two kinds of people:  One kind would read books in their cells, exercise and do and re-do crossword puzzles. The other kind would scream and curse, refuse to dress and throw their feces at the walls.

The goal in solitary confinement, he said, was to avoid becoming the second kind of inmate.

“There’s one that’s resilient and one that’s not so resilient,” said the man, a former member of the Mexican Mafia who asked CalMatters not to use his name for fear of retaliation. “I’ve seen people go over the edge.”

Assembly Bill 2632, named the “California Mandela Act” after former political prisoner Nelson Mandela, would be the most wide-ranging change to solitary confinement of any state, limiting the practice in all California prisons, jails and immigration detention facilities. Its contentious passage through the Legislature ended largely on party-line votes, with Republicans continuing to raise an alarm about the bill’s potential costs.

Proponents of limiting or doing away with solitary confinement have long argued it is inhumane, ineffective and tantamount to torture. Law enforcement groups have asked Newsom to veto the bill, arguing that prison and jail officials, not legislators, should determine when and where to use solitary confinement.

The former inmate – who spent decades alone in 8-by-10 cells at multiple California prisons, much of it in solitary – has a surprising outlook.

He thinks eliminating solitary confinement is a bad idea.

“That’s crazy,” he said. “I don’t think there’s much thought put into it. I believe they think it’s detrimental to the psyche of the individuals who are being housed there.

“But without some kind of deterrent, I mean, you go whack a guy and you get 15 days in the hole and you’re back in a regular general population yard.”

Solitary confinement in California takes many forms. There are few regulations and no universal definition, but generally, solitary confinement means spending 22 to 23 hours per day in a single cell, usually about the size of an elevator.

The bill before Newsom also bans solitary confinement entirely for anyone younger than 26 or older than 59; people who are pregnant, recently had a baby or suffered a miscarriage; and people who suffer from a physical or mental disability.

Margo Mendelson, legal director of the Prison Law Office, which co-sponsored the bill, said the former inmate mischaracterizes the bill and oversimplifies its impact. The proposal would not require corrections officials to put someone back in the general population, and “disciplinary measures would still be in place,” she said. It’s the practice of solitary confinement for 22 or 23 hours a day that would end.

“It creates the culture of deprivation and violence itself,” Mendelson said.

“People do get better, places are more peaceful, re-entry is more successful when we bring programming and relationships and social contacts back to these spaces.”

Research conducted in the last 20 years has shown solitary confinement to be harmful to the people incarcerated, as well as expensive and ineffective in rehabilitating prisoners. The health effects cited include depression and anxiety, but also hallucinations and hypersensitivity to sounds and smells. Suicidal ideation and attempts are far higher for inmates in solitary confinement than the general population, some of the same research shows.

In 2015, the United Nations defined any period of isolation beyond 15 days as torture. In a 2016 editorial, former President Barack Obama called solitary confinement “an affront to our common humanity.”

But it’s become one of the most regularly-used tools by prison and jail administrators to punish violent inmates, sequester disruptive ones and, sometimes, as a protective measure for former police officers or other inmates who would be obvious targets inside.

“The practice is incredibly resilient,” said Keramet Reiter, a University of California, Irvine, criminologist who has done extensive research on solitary confinement.

“This isn’t the first time that people have looked around and said, ‘Wow, this seems like a really damaging practice, let’s get rid of it.’ We’ve been looking around and saying that since the 1800s.”

The U.S. experiment with solitary confinement began as early as the 1780s, waned in the 1800s and was largely abandoned in the early 1900s.

But beginning in the 1980s, prisons brought back solitary confinement, and its use exploded: By 1997, nearly every state had a supermax prison. In a snapshot of prison populations in 2021, Yale Law School researchers said there were between 41,000 and 48,000 people in solitary confinement in the U.S.

For California, it has remained a contentious issue.

After a series of hunger strikes for two months in the summer of 2011 across California prisons, the Department of Corrections and Rehabilitation reached a settlement in federal court with Pelican Bay State Prison inmates held in solitary confinement for decades based on their perceived gang affiliations.

The 2015 settlement ended the department’s practice of indefinite detention in solitary confinement. But a federal judge ruled in February that the department continues to violate the terms of the agreement by fabricating or exaggerating reports from confidential informants that put inmates back in solitary.

Solitary confinement in California prisons isn’t what’s sometimes portrayed on television: A pitch-black cell with a hole in the floor. That, Reiter said, was indeed the practice in some Southern states in the 1970s and 1980s but isn’t the case here, where prison and jail officials have some leeway in defining the practice.

Inside the solitary cell blocks of one California prison, the walls were yellowing, according to the former inmate and member of the Mexican Mafia. Instead of bars, inmates peered out through perforated steel. Everything was concrete, even the bed frames.

Inmates were close enough to hear each other, but calling out to others earned inmates a “115,” California prison code for a disciplinary report. The former inmate said he was still able to give commands to other Mexican Mafia gang members, either from his cell or in meetings at the prison law library. “I used to run a whole crew from the SHU (Special Housing Unit).”

The varying definitions of solitary confinement in California make tracking the number of people difficult.

“We know that there are other units around the state under different names that are called step-down units or other things like that, where in practice, people are still spending 22, 23, 24 hours a day in solitary confinement,” Reiter said.

And that’s one of her concerns about the bill: If prison and jail officials can simply call solitary confinement another name, then they probably will.

The state prison system is one version of solitary confinement, but the 58 counties each have their own jails with their own definitions of the practice.

Mendelson, of the Prison Law Office, described the county incarceration system in California as “the Wild West for solitary confinement.”

“There is nothing limiting the totally unprincipled and excessive use of solitary confinement in county jail,” said Mendelson, who has regular contact with inmates at jails in Northern California.

In those county jails, Butte County Sheriff Kory Honea said he’s faced with a changing inmate population, and he needs solitary confinement to deal with it.

Prison realignment, mandated by Assembly Bill 109 in 2011, reduced prison populations in part by housing more inmates at county jails. Honea, who is also the president of the California State Sheriffs’ Association, said that led to a “more criminally sophisticated inmate.”

“You’re dealing with people who have long criminal histories and prior experience in state prison,” Honea said.

“Then those prison politics which used to not be so prevalent in county jails now are far more prevalent,” he said. “The last 12 years, there are increased assaults on staff. Our facilities generally were not designed to meet the needs of these individuals.”

Honea said he and other sheriffs also need to be able to use long-term solitary confinement for disruptive inmates suffering from mental health disorders that put themselves and others in danger.

“I’m not suggesting solitary is a solution to mental health, the impact that solitary confinement and administrative segregation can have on mental health is out there,” Honea said. “But we can deal with that without simply mandating something that would apply across the state.”

The sheriffs’ association wrote in opposition to the bill that the Board of State and Community Corrections, rather than the Legislature, should regulate the use of solitary confinement. The board sets standards for prisons and jails and conducts inspections.

The projected cost to the California prison system is $1.3 billion up front, with another $200 million per year to pay for more staff. The costs to county jails would vary by location. Honea said he did not yet know the potential cost to the Butte County Jail should Newsom approve the measure.

But the bill’s supporters argue the measure would actually save the state money. In a report published in July, the nonprofit Immigration Defense Advocates argued that solitary units “require more custody staff.” Closing down solitary confinement facilities and repurposing them for other uses would be “covered by the massive savings generated by this transition,” the report found.

Solitary confinement is usually reserved for disruptive or violent inmates, or validated gang members. But at least one former California inmate, author Kenneth E. Hartman, wrote in 2020 on the website Solitary Watch that he was put in solitary confinement for political reasons.

Hartman was convicted of murder and sentenced to life without parole in 1980, but former Gov. Jerry Brown commuted his sentence in 2017.

Hartman contends the reasons he was placed in solitary confinement included testifying against the prison system in federal court, organizing a letter-writing campaign to legislators and encouraging fellow prisoners to sign political petitions.

The Department of Corrections and Rehabilitation did not respond to a request for comment on Hartman’s allegations.

“When you look at solitary, what you see is people who are challenging the system in some way,” Reiter said. “Challenging its categories, challenging its rules, and that makes it harder to reform, right? Because these are the people that the system is struggling to deal with.”

Mendelson of the Prison Law Office said limiting solitary confinement doesn’t mean the prison or jail is unable to take any disciplinary measures at all.

For instance, she said, a facility would still be permitted to house a problem inmate in a single cell. But the additional burdens of solitary confinement – 22 or 23 hours per day in a cell, with no opportunity for education or socialization – would end.

“That doesn’t mean there can’t be a significant set of consequences,” Mendelson said. “Those consequences just can’t be torture, which is what solitary confinement is.”

The former member of the Mexican Mafia doubts that approach.

“Look, is it a bad place? Sure,” he said. “But they have to have bad places for bad people.”