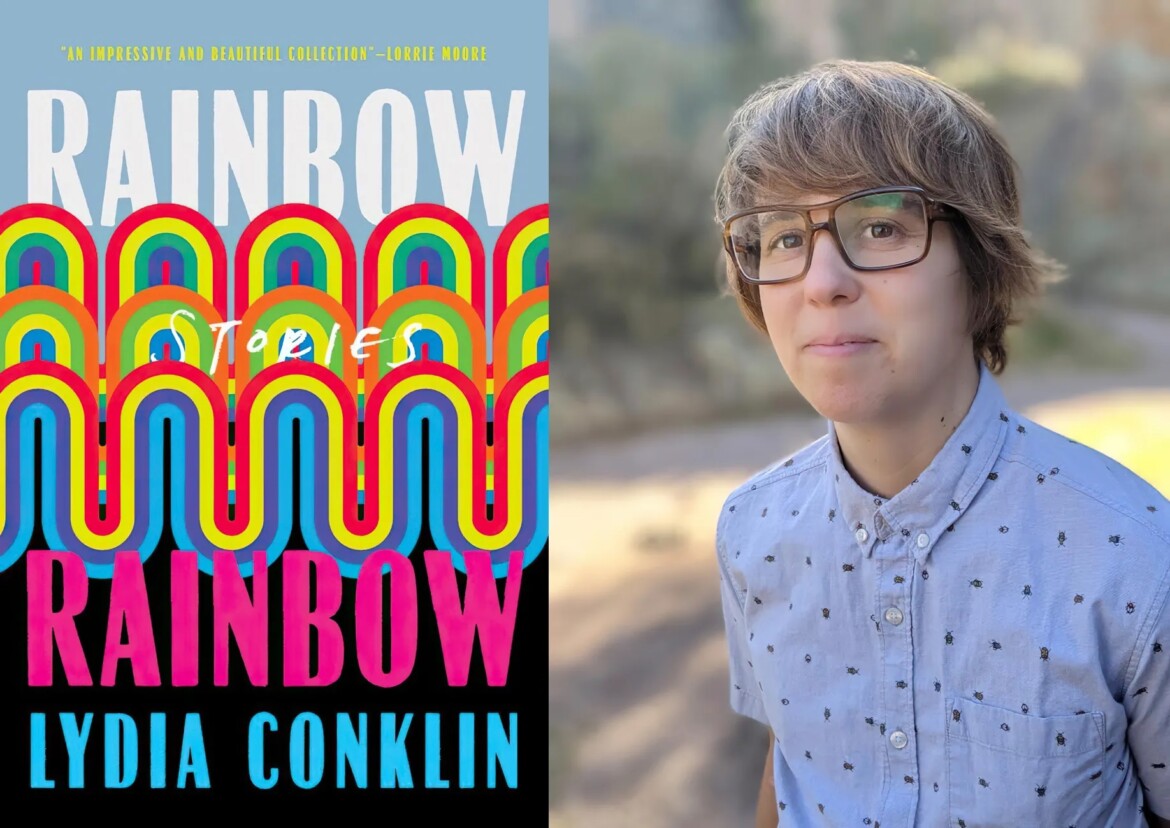 Plots, settings, themes, point-of-view, conflict — these and other literary elements are routine fixtures in fiction writing. Less common, though, is the intentional and continuous focus on the lives of characters who identify as queer, trans and nonbinary.

In their debut story collection “Rainbow Rainbow,” author Lydia Conklin takes the untypical approach of centering on individuals who are not heterosexual and cisgender.

Says Conkin, “I decided when I put the collection together that I wanted all of the stories to focus on queer protagonists. And I also wanted to pick stories where the whole story was populated by different kinds of queer people and not just one queer person adrift in the heterosexual world, because I wanted to show whole communities and structures that were made of queerness and not just queerness in isolation.”

Conklin, who has lived in Palo Alto and South Berkeley, currently resides in Nashville and teaches at Vanderbilt University, where they are an assistant professor of fiction. They’ve received several fellowships for their writing, such as the Wallace Stegner Fellowship in fiction from Stanford University, as well as other writing-related awards, scholarships, grants and prizes.

They share, “The Bay Area means so much to me. It’s a place I hope to return to one day.”

Published in late May 2022 by Catapult, the particularities of the 10 stories in “Rainbow Rainbow” vary, with each involving different locations, circumstances and outcomes, but aspects unique to the queer community are scattered throughout the collection’s pages.

I wanted to show whole communities and structures that were made of queerness and not just queerness in isolation.

For instance, in one of Conklin’s stories, a nonbinary character considers their pending top surgery; in another, a lesbian couple makes decisions regarding a sperm donor. In a third, a character gives thought to their gender identity, reflecting on the possibilities.

In its covering of a range of personal experiences and, along with them, emotions — the highs, lows and in-betweens — one concept that stands out in “Rainbow Rainbow” is queer joy.

Says Conklin, “I felt like a lot of the media around queerness when I was growing up was very grim, and a lot of narratives, even still sometimes in queer novels, would end in suicide.”

They continue, “My book does have some darkness to it. It deals with darkness and nuance, and it’s not all just happiness. But I wanted to have humor in there and moments of queer joy to sort of disrupt that kind of narrative of desperation … Not that it’s not an important narrative, but just had been overplayed as the dominant available narrative that kind of gives a hopelessness to the queer experience.”

Throughout their book, Conklin also explores the distinctive characteristics and dynamics of queer relationships, aware that one’s “family” and relationship type may vary.

They note, “Some people [in the queer community] have more ‘families of friendship’ or polyamory or different sorts of non-‘traditional’ relationship structures.”

In one of the stories in “Rainbow Rainbow,” titled “Pink Knives,” the nonbinary protagonist is testing the “open relationship” waters, meeting someone for an intimate encounter — someone outside their partnership with a woman — for the first time. Set in San Francisco’s Mission District and taking place during the COVID-19 pandemic, it includes references to Valencia Street as well as Dolores Park.

As the narrator (i.e., protagonist) of the story assesses, “The park is the only place to go. No one is too concerned about the real reason their lives have shifted — a reason that dangles in the famous fog and sticks to fomites everywhere …”

The story openly addresses their confronting of the pandemic’s effects on their personal life — their currently out-of-the-country girlfriend’s fear of boarding an international flight because of her pre-existing medical condition; a friend bedridden in an ICU because of the disease; and hesitancy toward physical proximity to, and the touching of, a relative stranger. Even the title alludes to COVID-19, with “pink knives” describing the pattern on the mask of the soon-to-be-lover.

As Conklin explains, “Suddenly with COVID, the isolation and the health risks to those kinds of intimacies became more challenging. So I think it was a hard time for everyone obviously, but especially for a lot of queer people because of those relationship structures becoming unsafe.”

While these types of circumstances will resonate with Conklin’s queer and gender nonconforming readers, their stories also have universal appeal in their addressing of themes such as loneliness, self-contemplation and personal growth. And then there’s that experience in “Rainbow Rainbow” that’s relatable to everyone: figuring out how to navigate life — both during the COVID-19 pandemic and in general.

Lydia Conklin’s short story collection “Rainbow Rainbow” can be purchased at the Catapult website at https://books.catapult.co/books/rainbow-rainbow/.