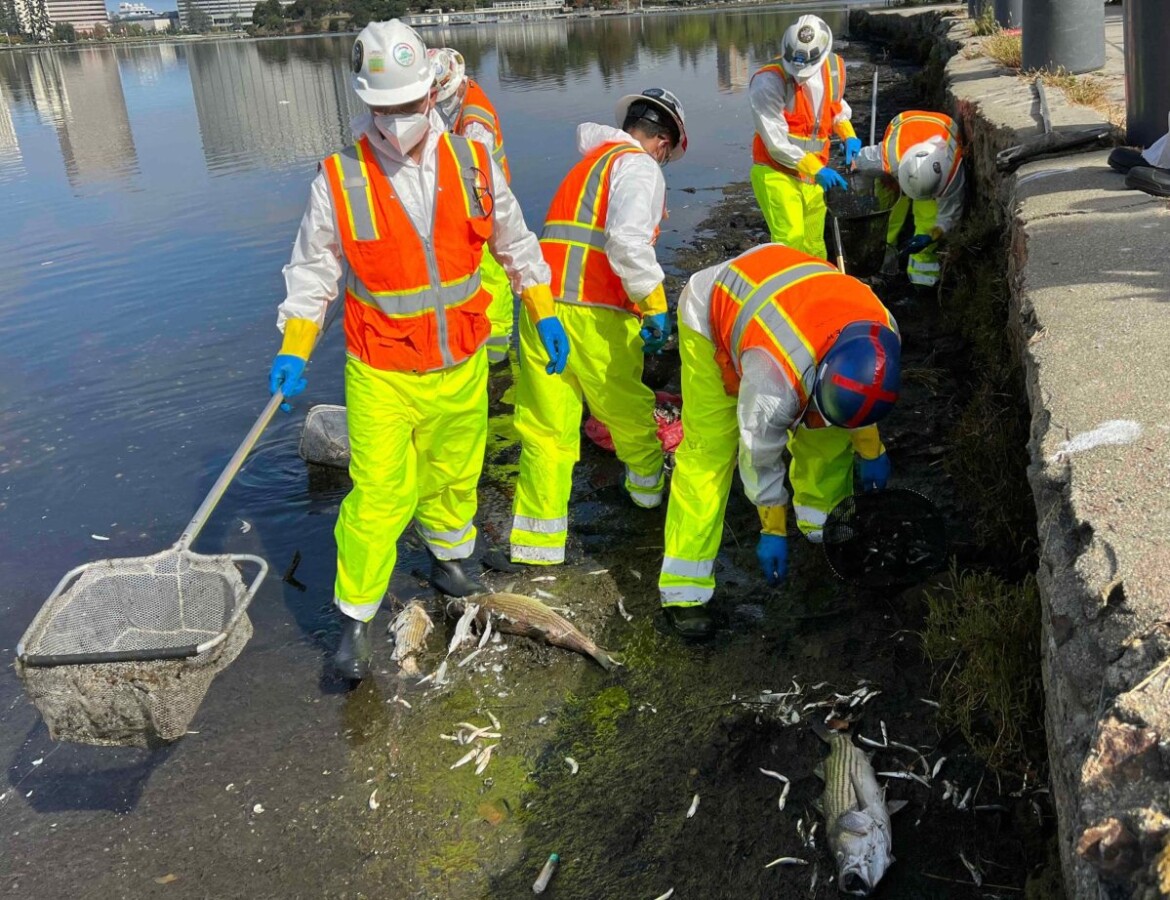 Oakland Public Works crews remove dead fish lining the shores of Lake Merritt in Oakland on Aug. 31, 2022. The fish die-off may be attributed to an algal bloom that has been blamed for mass fish die-offs around the Bay Area. (Photo courtesy of city of Oakland via Bay City News)

The red algae bloom in the San Francisco Bay killing hundreds, if not thousands, of fish since last week likely won’t end for at least a couple of weeks, as the warm weather gets hotter going into Labor Day weekend, according to experts.

Environmental agencies said this week that the bloom — which has been reported from the Dumbarton Bridge to Oakland’s Lake Merritt and the Alameda Estuary, Oyster Point, Baywinds Park in Foster City, Hayward, Keller Beach, Point Molate, and Sausalito — may come from a harmful species called Heterosigma akashiwo.

It’s a swimming marine algae that forms toxic surface aggregations. The species name is derived from “red tide” in Japanese.

“We do not know how long it’s going to last,” said Eileen White, the executive officer for San Francisco Bay Regional Water Quality Control Board. “We’re still studying it and monitoring it on a regular basis. Unfortunately, we have not seen an algae bloom of this particular species of this magnitude in San Francisco Bay ever before, that we know of.

The bloom was first observed in July in the Alameda/Oakland area. The algae may be impacting dissolved oxygen concentrations which could be contributing to the fish deaths.

Officials said it is unclear how toxic the bloom is. Crews of biologists are gathering information and fish necropsies are being scheduled.

They also don’t have an accurate count of how many fish are dead; while the official count as of Aug. 26 was at least 100 striped bass and less than 10 sturgeon and mussel deaths, images of the carnage posted around the internet suggest the numbers are likely significantly greater. There have also been reports of rays dying in Lake Merritt.

Oakland public works crews were out Wednesday morning along the shores of Lake Merritt cleaning up thousands of rotting fish remains, a city spokesperson said.

Crews were out working just before 10 a.m. at East 18th Street and Lakeshore Avenue and were trying to cover the circumference of the lake Wednesday.

With hot weather in the forecast, city officials want to abate the public nuisance and odor by the lake, public works spokesperson Sean Maher said.

Public works officials do not believe the die-off is due to overflows of sewage into Lake Merritt. Still, city officials posted signs warning the public to keep children and pets away from the scum, algae and water in the lake.

James Hobbs, Environmental Program Manager of the Bay Delta Region of the California Department of Fish and Wildlife, said dozens of sturgeon have been killed by the spreading algae — at least seven white sturgeon in San Pablo Bay — and at least hundreds of striped bass just between the San Mateo and Dunbarton bridges.

“Those numbers are probably gross undercounting of what’s total in the Bay,” Hobbs said.

White said it is the most dense algae bloom in the South Bay in more than 40 years. Though Heterosigma akashiwo is not known to cause illness in humans, it can cause eye and skin irritation and the water should be avoided, White said.

“We do know with warming climate we had the driest January through March on record,” said White. “That may have been a contributing cause, but we’re not sure what the cause is.”

No recommendations have been issued regarding eating fish caught in the Bay, though an annual quarantine regarding mussels along the California coast is now in place.

“This type of organism has been detected in San Francisco Bay before, but not to this level,” said Jenna Rinde, Senior Environmental Scientist with the California Department of Fish and Wildlife. “We really don’t understand mechanisms that’s causing these fish kills.”

State information about harmful algae blooms can be found online along with a link to a map of nearby blooms.