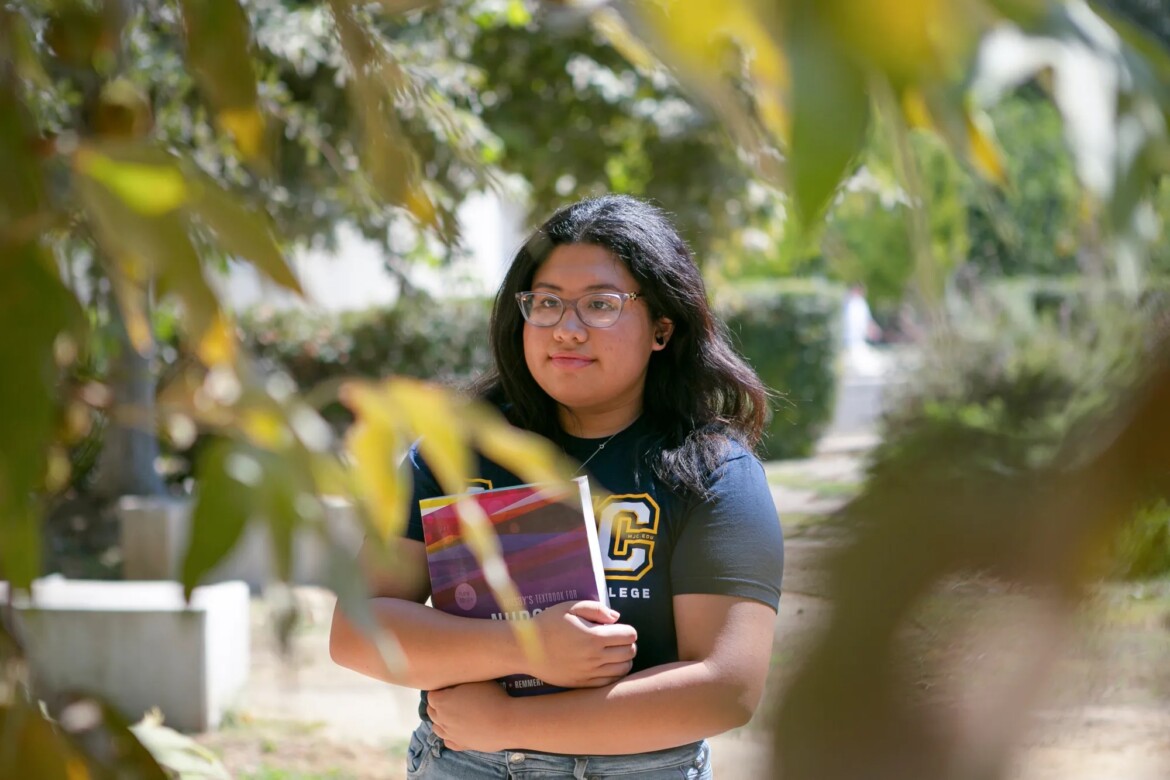 Kathleen Coronado, a freshman at Modesto College in Modesto on Sept. 7, 2022. Coronado is enrolled with the college's free tuition program. Photo by Rahul Lal, CalMatters

But when the coronavirus pandemic struck and she was forced to learn online, Coronado saw her motivation dwindle. So did her confidence in being able to afford the cost of going to college.

“COVID really stopped that for me,” Coronado said. “It made me lose some of my motivation.”

Then, at the beginning of her senior year, she learned Modesto Junior College would waive her tuition under its “Free for Me” program. She decided to apply and started as a freshman this month.

A number of California community colleges — including Modesto Junior College and several campuses in the Peralta Community College District  — are relying on students like Coronado to help increase their enrollment, through programs that rely on federal pandemic relief to waive tuition for new and continuing students this coming fall. They’re hoping to reverse a trend of declining enrollment during the pandemic.

Free college isn’t a new idea in California: The state’s Promise program gives full-time students at some colleges scholarships to cover tuition, and students with a low-enough income can also apply to have their fees waived.

But unlike the Promise program, which freezes out part-time students, these new efforts at individual campuses come with lower barriers to entry, making it easier for students to qualify. At Modesto Junior College and Laney College in Oakland, for example, there is no minimum number of units a student has to enroll in. And some campuses are going beyond tuition, helping students with expenses like food, technology and school supplies.

Only 17 of California’s 116 community colleges have seen their enrollment increase since the fall of 2020, a recent CalMatters analysis found.

Laney College’s enrollment diminished by 19% between the 2018-2019 and 2021-2022 academic years. At Modesto Junior College, enrollment decreased among male students and those from “underserved populations” during the pandemic, said spokesperson Jeanette Fontana. But enrollment overall has started to bounce back since the college launched Free for Me last spring, she said.

“Money is a big incentive,” said Zachariah Wooden, vice president of legislative affairs for the Student Senate for California Community Colleges. “It’s not like they’re getting paid to take courses, but it’s more, you know, ‘I can save money by taking courses in the fall semester.’”

The pandemic created a number of financial challenges for college students in California. Over half experienced a decrease in income, while about a quarter of students had to spend more money on books and school supplies.

About 60% of students now expect to receive a degree later than planned, reports The Institute for College Access & Success. And struggles to meet basic needs are especially pronounced among Black and Latino students, over half of whom have reported being more food insecure.

“Since we’re all in the same boat and we’ve all been impacted in one way or the other, it’s not that embarrassing to admit I need financial help,” said Modesto Junior College student and student government secretary Stephanie Barajas. “

“We have so many low income students. So, I always feel comfortable owning all the help that there is.”

At $46 per unit, California already has the cheapest community college tuition in the nation.

But tuition and fees only account for about 5% of costs for community college students living off campus, reports The Institute for College Access & Success.

“Folks are really going towards this, like, free college, and for them it means free fees and tuition,” said Manny Rodriguez, the Director of Policy and Advocacy for California at The Institute for College Access & Success.

Colleges, however, also need to look at the cost of housing, books and other supplies that can push students over the edge financially, Rodriguez and other advocates and researchers say.

“If you have someone going to school in a high cost of living area such as the East Bay and Oakland, you also have cost of living. And add to that the likelihood that employment…if it has to be reduced to meet the time demands of college, also reduces income,” said Laney College President Rudy Besikof. “So we’re really trying to meet students where they are.”

Merritt College, also in the Peralta Community College District, is providing students with a $500 housing voucher, as well as free breakfast and free parking. Berkeley City College, whose program doesn’t help with meals or school supplies, is still waiving several student fees, including health center fees and the cost of local public transportation for those who enroll in more than six units. Another college in the district, College of Alameda, is not waiving tuition but simply giving students $500 when they enroll.

Mazin Seed, the Berkeley City College student body president, will take advantage of the program and looks forward to being able to save on transportation. Having fees waived, he said, will help him save money to transfer to a four-year university.

“The school is helping students get back to school which is a great thing, especially after the past two years when a lot of people had to pause their education,” Seed said.

As a result of its Free for Me program, Laney College has seen its student headcount increase by 5,250, says Vice President of Instruction Becky Opsata. “It is very exciting to not have another term of enrollment decline,” she said.

Modesto College increased its enrollment by about 8% during the last spring semester when tuition was waived, says President Santanu Bandyopadhyay, which he described as swimming “against the tide.”

The campus program — along with COVID-19 vaccination incentives — cost the college more than $5 million last spring, but only covers tuition and does not help with other student fees. While Bandyopadhyay believes other financial barriers should also be addressed, he said waiving tuition alone still removes a key psychological barrier for students who might otherwise be intimidated to apply to college.

“If I as a student don’t even know the cost of attending college, and I’m thinking that if I go to college, I don’t know how much it costs, then cost is my biggest barrier,” Bandyopadhyay said.

The lack of long-term funding for these programs is concerning, however, said Denise Castro, a policy analyst at The Education Trust-West.

“There needs to be a historic investment in community colleges…because we know a significant amount of students of color (and) low income students are attending our community college system,” Castro said, noting that programs like these should be expanded to “really tackle college affordability” and “ensure there is a path for students” to pursue their education.

The COVID relief funding that supports the Peralta Community College District programs is slated to run out by the end of the fall semester. Campus officials are unsure whether they will have enough money to extend the program into the Spring, said Besikof.

Imperial Valley College ran into a similar challenge this fall, says campus spokesperson Elizabeth Espinoza. The college had waived tuition during the 2021-2022 academic year, but had to discontinue it as money ran out.

They are now providing a whittled down version of the program, which gives students need-based emergency grants.

With so many students learning online as a result of the pandemic, spreading the word about programs like Free for Me can also be challenging, said Barajas. Because of the program, she quit her full-time job and is now able to work as an after school teacher part-time, giving her more time to focus on studying. She’s enrolled as a full-time student and plans to transfer in about a year.

“I was able to find out about all the different programs and resources that we have. And that was just because I signed up for student government,” Barajas said. “Otherwise, I still wouldn’t be in the know.”

Still, students who did find out about Free for Me said they’re grateful.

Before his fall tuition disappeared – and a grant from the Modesto Junior College basic needs program helped him pay his rent –  Modesto Junior College out-of-state student Samuel Ramos worked at In-N-Out each day from 5 p.m. until 2 a.m., taking orders, making french fries and cleaning up. Now, he is relieved to focus on his studies and a hopeful transfer to UCLA.