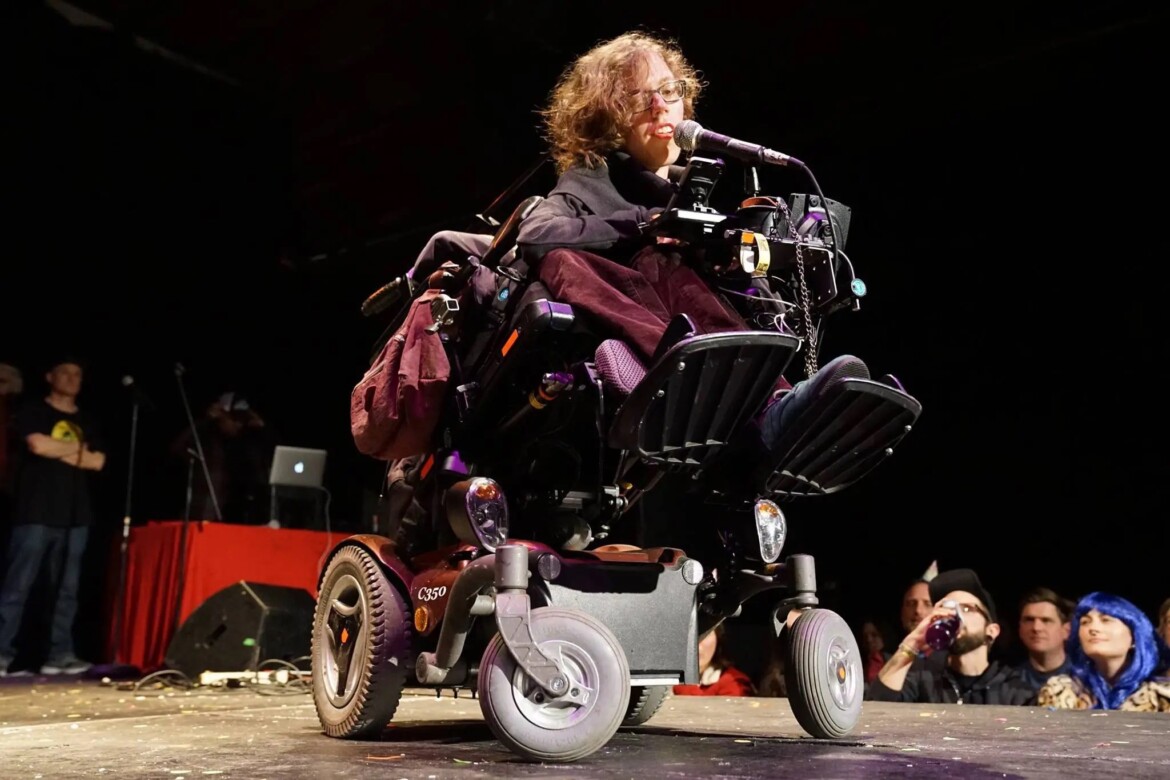 Oakland stand-up comic Jade Theriault, who has spinal muscular atrophy, will headline a comedy show in Alameda as part of the Comedians With Disabilities Act tour. (Photo courtesy Jody Lyon)

Growing up, Oakland resident and disabled stand-up comic Jade Theriault loved comedy, but they preferred sketch shows like “Saturday Night Live” and cartoons like “South Park” to the one-person shows. They, at first, doubted a comic performing their own work could even be real.

“It was magic to me; I didn’t believe it. No way they write their own material — that’s too crazy. And then I started doing it in high school. And I found out I was good at it.”

Jade also credits the “misfits” of the local comedy scene with giving them community within an entertainment industry that has never much concerned itself with accessibility. They’ve since performed at SF Sketchfest and major Bay Area venues like Cobb’s Comedy Club.

On Oct. 13, Jade, who has spinal muscular atrophy and uses a wheelchair, will headline a comedy show in Alameda as part of the Comedians With Disabilities Act tour, which will also stop in Santa Cruz, Sacramento and Rohnert Park. Hosted by Nina G, the co-author of “Bay Area Stand-Up Comedy,” who refers to herself as a “stuttering comedian,” the tour comprises comics with both visible and invisible disabilities to pair comedy and advocacy during National Disability Employment Awareness Month.

The troupe was founded by the late comedian Michael O’Connell in 2010 as a means to highlight disabled entertainers.

The CDC estimates that 26% of American adults have a disability (though they may not necessarily identify as disabled), yet performers with disabilities were rarely included in comedy club lineups or festivals.

Nina G joined O’Connell in the core troupe in 2011, and has helped lead it since O’Connell’s passing in 2016. She credits the Comedians With Disabilities Act with helping her hone her voice without worrying about how nondisabled audiences will receive it.

“It was one of the few places I could really step into that space of ‘This is who I am’ from the onset. I didn’t have to make audiences comfortable; they already kind of got it,” she says. “There’s always that thing of being a comic with a disability where, the first two minutes, you’re like, ‘OK, everybody, it’s OK; I’m different.’ But when you perform for an audience that already gets that, oftentimes an audience who’s already disabled themselves, you’re just understood from a different place.”

And beyond having disabled people on (ramped) stages, the venues were chosen to accommodate disabled audiences as well. Jade has noted that many lauded venues in the Bay Area aren’t always willing to prioritize accessibility, and by extension, disabled talent.

The Comedians With Disabilities Act tour kicks off on Oct. 1 at the ninth annual Santa Cruz Comedy Festival, then heads to Alameda Comedy Club on Oct. 13, Sacramento Comedy Spot on Oct. 14 and concludes with a show at Sally Tomatoes in Rohnert Park on Oct. 29. Other headliners include Mean Dave, Dan Smith and Steve Danner. Tickets and a full list of the shows’ lineups can be found at https://comedianswithdisabilitiesact.com/.