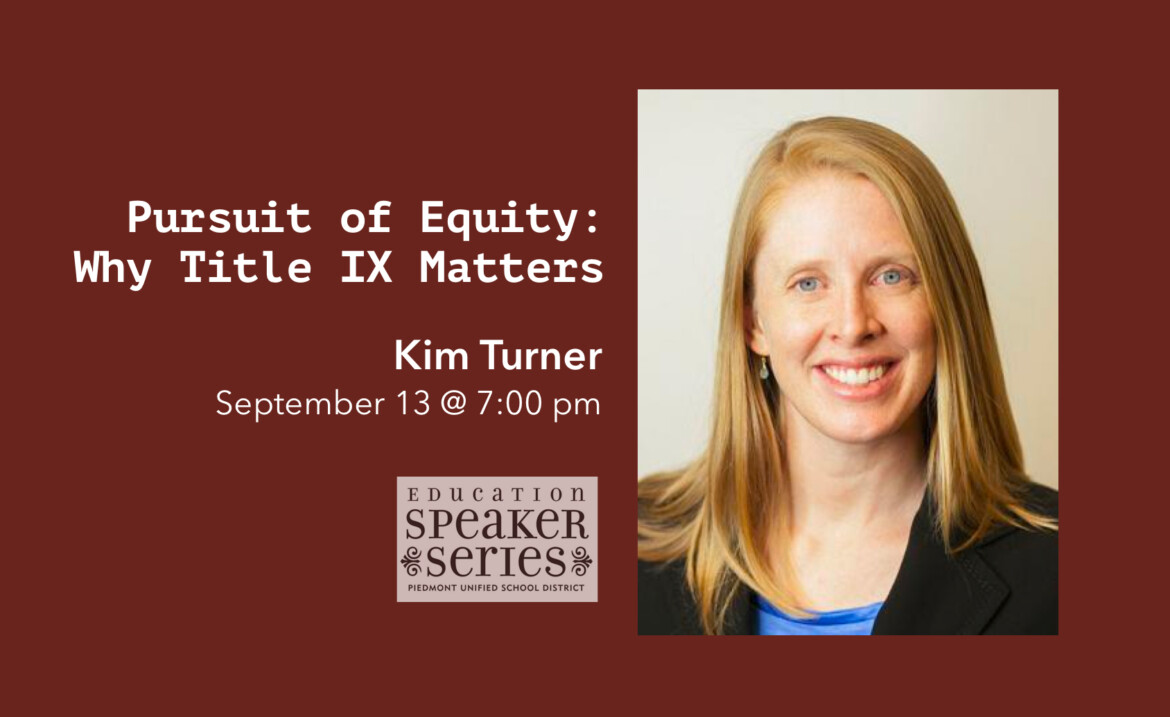 The Piedmont Education Foundation Speaker Series hits the ground running in its 2022-23 season with a presentation Sept. 13 from Kim Turner. Turner, who has a decade of experience as a nonprofit Title IX attorney and as the director of the Gender Equity Initiative at Positive Coaching Alliance, will speak on the topic of gender equity in a program titled, “Pursuit of Equity: Why Title IX Matters.”

Prior to attending law school and becoming an attorney, the San Francisco-based lawyer played Division 1 college volleyball for Brown University. She then worked in the U.S. Senate and for the National League of Cities in Washington D.C. and served as a member of the expert review panel for the Women’s Sports Foundation report 50 Years of Title IX: We’re Not Done Yet. A coach of youth sports in the Bay Area, Turner is also Director of the Gender Equity Initiative at Positive Coaching Alliance* and is active on the speaker circuit nationwide. (PCA seeks to eliminate gender inequity in youth sports and grow the number of women coaches, especially women coaches of color.)

In an interview, Turner says Title IX is “fantastic and has accomplished a great deal, but in a recent study, 58 percent of polled parents and 71 percent of children said they know nothing about the law. My passion in part is to make Title IX digestible and better understood.”

This year is the 50th anniversary of Title IX, the federal civil rights law in the United States that was enacted as part of the Education Amendments of 1972 and prohibits sex-based discrimination in education programs. Even so, one common misunderstanding about Title IX is that it is not designed for or best used if applied to only a single program or one sport or one athlete, according to Turner. “It’s ideal with Title IX for a school or district to do a whole program analysis. It’s an overall analysis; you don’t want to apply it to a problem with one sport in a program or one athlete in a sport.” A second obstacle to applying the law comprehensively is the optics of youth sports. “People think we’re done with Title IX equity because they see girls playing sports. But particularly for women athletes of color and LGBTQ athletes, studies show these populations are not being supported equally.”

Asked to preview a few of the primary themes she plans to emphasize for Piedmont parents, students, coaches, teachers, and other stakeholders involved in youth sports, Turner says first is that “getting girls in the game is terrific for girls’ education, health and employment success. Second, gender equity is helpful for everyone in a community: it teaches them how to be gender equitable in life. Third, the changes we need to make under Title IX are completely doable. For those concerned the pathway is challenging, I say I’m grateful to have seen schools and districts across the country make great strides to achieve it.”

Often, she adds, schools she has observed with limited resources or districts and multiple challenges make strides to implement Title IX that are equal to or greater than that of schools with abundant resources.

The effort to achieve effective and lasting gender equity comes with patience as well as high aspiration, but there is also room for simplicity. Turner says one way for schools to achieve immediate or quick improvement is to ask girls what they need. “It sounds simple, but it’s incredibly effective and comes at almost no cost. We ask them in surveys, “What sports would you like to play? Why do you play the sports you play and if you don’t play, why not?” It makes programs effective at gaining and retaining girls when they give girls a voice.”

Similarly, recruiting and maintaining more women coaches is a matter of clear communication and action. “Ask a terrific athlete in your community to coach. Ask her twice, ask her three times. Work with her schedule to make it happen. Longterm, invest in leadership pipelines. Recruit women leaders in sports and make them athletic coordinators or athletic directors. They will hire and bring in more women coaches.”

And just as girl athletes are models for all of their peers — girls, boys, and non-binary students — Women in coach and sports leadership positions are vital role models for an entire community. “Women are amazing in those positions and studies show women in youth sports are highly effective,” says Turner, who will include specific references to case studies and other research-based information in her presentation.

“We know for example that only one quarter of youth coaches are women right now. We know there are women who’ve not yet been tapped — not just for girls sports, but for all youth sports. I coach co-ed teams and the athletes all see a woman as a coach model. Boys and all kids need to see diversity in their leaders. Those boys who see me and other women coaches most often will become adults who are more cooperative working with women co-workers and bosses.”

The message Turner says is most important for girls is that they have agency and “can play any sport and do and be anything.” For stakeholders in youth sports, she will encourage parents and guardians to support coaches by giving them respect, honoring their strategies, partnering with them by helping with everything from providing post-game snacks to serving as assistant coaches and allies.

*An earlier version of this article incorrectly identified the Positive Coaching Alliance as the Gender Equity Institute.