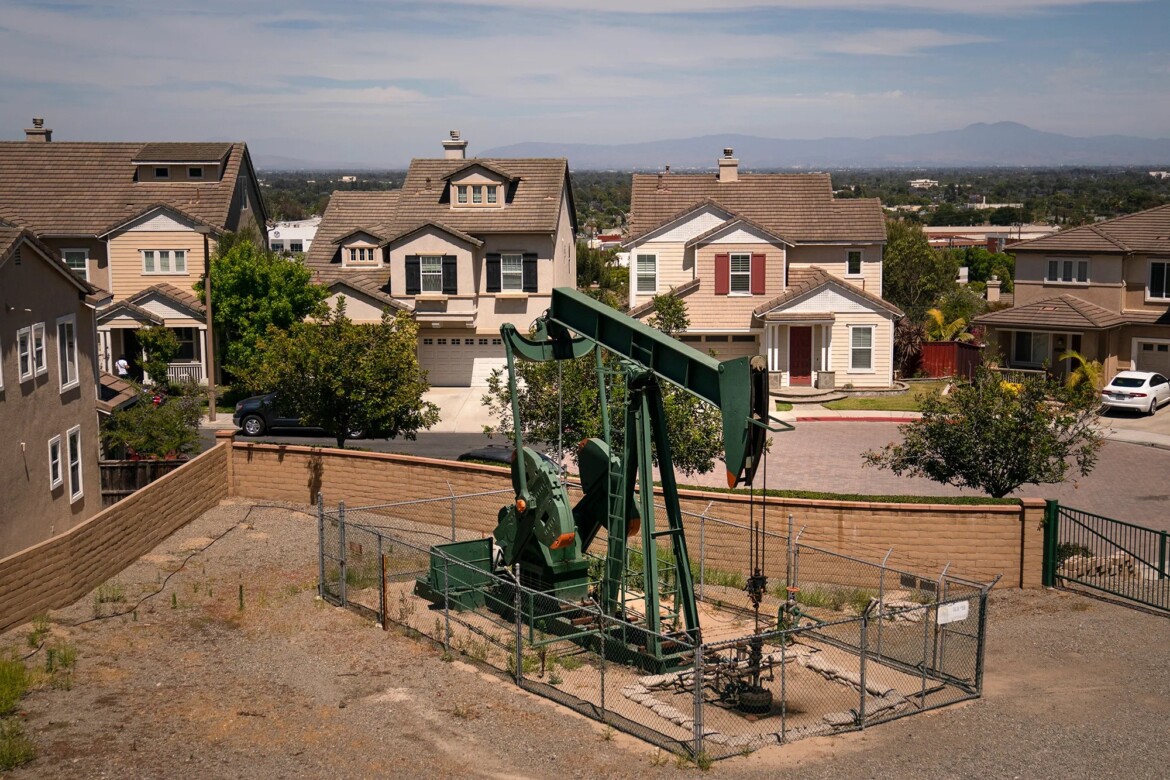 A pump jack extracts oil at a drilling site next to homes in Signal Hill on June 9, 2021. Photo by Jae C. Hong, AP Photo

One ambitious bill for tackling climate change, however, was shot down by the Assembly: AB 2133 – which would have ramped up goals for reducing greenhouse gases — failed at the last minute.

Five of the six climate and energy bills pushed by Newsom made it to his desk. He now has until Sept. 30 to sign or veto them.

“This was a very big and historic win. It has taken this state decades to get to this point,” said Sen. Monique Limón, a Democrat from Santa Barbara, who authored SB 1137, a bill that requires setbacks around new oil and gas wells and steps to protect residents at old wells.

The moves by the Legislature come as California is experiencing the dire effects of climate change. Higher temperatures and extreme heat waves, more frequent and prolonged drought and severe wildfires are plaguing the state, straining the state’s power grid, threatening the environment and posing risks to vulnerable communities.

Newsom, who is up for re-election and in the final stretch of his first term, urged the Legislature with only about three weeks left in the session to pass the six proposals and approve $54 billion in spending for his climate initiatives. Before that, lawmakers said he had mostly stayed quiet on their bills and hadn’t backed them.

Here are the bills:

Several controversial bills aiming to cut emissions and help California transition to renewable energy were among top priorities debated by the Legislature Wednesday.

But a more aggressive pace of cutting greenhouse gases failed in the Assembly. AB 2133 would have set California’s target at 55% below the state’s 1990 emissions, up from the current 40% target. Some legislators said setting a more aggressive goal was unrealistic when the state is not on track to meet the existing one and it was too fast of a pace that would put people in the oil and gas industries out of work.

California enacted another greenhouse gas bill, AB 32, in 2006, requiring the state to set a target for emissions to drop to 1990 levels by 2020. As with the discussion Wednesday about the new bill, that bill was criticized at the time for not having a clear plan. But then the state took steps to achieve its goal earlier than the law required.

Nevertheless, just before midnight, the new bill couldn’t garner enough support and fell four Assembly votes short of the 41 that it needed to pass.

While environmentalists applauded many of the measures, many groups have also criticized Newsom for not acting faster to phase out fossil fuels and cut emissions.

The oil and gas industry also lobbied heavily against Newsom’s climate initiatives, criticizing them as “too aggressive.”

“This is an extraordinarily aggressive goal that would require large-scale transformation of California’s entire economy,” said Kevin Slagle, a spokesperson for the Western States Petroleum Association, a trade group representing the oil industry. “It is a regressive mandate that will hit those at the lower end of the income spectrum the hardest.”

Sen. Bob Hertzberg, a Democrat from Los Angeles, laid out for his colleagues the contentious measure that didn’t pass, taking them through a painstaking recounting of the climate change policy accomplishments California has already achieved.

Republicans in both chambers shot down the measures.

Sen. Brian Dahle, a Republican from Bieber who is also running for governor, was one of the most outspoken opponents of the bills that are Newsom’s climate priorities. As he had done all day in response to the bills, Dahle bemoaned the lack of details in the legislation, questioning if those goals were achievable and how they could be accomplished.

Dahle mocked the approach of the bills, adding that without a more detailed plan, passing the bills would be like “setting a target, taking victory lap, waving your magic wand and sprinkling some pixie dust.”

Authored by Sen. John Laird, a Democrat from Santa Cruz, SB 1020 sets interim targets for generating clean energy. A current law already requires 100% of retail electricity to be fueled by renewables such as wind and solar by 2045. The new law would add 90% by 2035 and 95% by 2040. In addition, all state agencies must source their energy from 100% renewable sources by 2035, ten years sooner than law now requires.

The question remains, however, if California’s electrical grid can handle the surge in energy demand.

Slagle, of the Western States Petroleum Association, said the governor’s approach was flawed and ignores the reality of the grid’s volatile reliability.

“The governor’s ‘climate package’ depends on energy reliability, so it is inconsistent that on one hand he is aggressively gutting energy reliability and affordability in California and on the other he is pushing actions like this to help try to maintain the grid,” he added.

The state is expected to see a 68% increase in energy consumption by 2045, according to the California Air Resources Board. To handle that increase, the agency estimates that the state needs to expedite renewable energy projects. Power lines and more battery storage capacity also need to be improved. To maintain reliability when wind and solar aren’t available, the state will need more backup dispatchable power to account for energy losses.

Without those investments, California would have to keep relying on climate-warming fossil fuels, particularly natural gas. It’s a concern Newsom has highlighted in his support for extending the Diablo Canyon nuclear power plant, a clean source of energy that provides about 10% of the state’s electricity. He said the state needs more sources of clean power while it makes progress on transitioning to renewable energy.

“The reality is we’re living in an era of extremes,” he said at a press conference on Wednesday. “Getting Diablo Canyon extended for a short period of time will provide us the capacity to stack all these renewables. That energy does not produce greenhouse gases. That energy provides baseload, reliability and affordability.”

A separate bill, SB 846, that aims to keep the Diablo Canyon nuclear power plant operating was approved by the Legislature and is now on Newsom’s desk for his signature. It would keep the plant open until 2030 and give its operator, Pacific Gas & Electric, a $1.4 billion loan to do so. The plant is a carbonfree source of energy, although nuclear power opponents are concerned about accidents and nuclear waste issues.

A disagreement on methods to extract carbon has pitted the oil industry against environmentalists as California deliberates on how to reduce the millions of metric tons of carbon that are already in the air.

One approved bill, SB 905, directs the California Air Resources Board to develop a program and set regulations for carbon capture, utilization and storage projects at polluting industries, such as oil refineries. The practice is supported by the oil industry but environmentalists say it has the potential to do more harm than good and prolongs the lives of fossil fuels.

Victoria Bogdan Tejeda, a staff attorney at the Center for Biological Diversity, said carbon capture and storage projects at industries are “difficult to parse, highly technical and hugely consequential.” She said injecting and storing carbon deep underground can be dangerous and that pipelines could leak could cause severe health problems for nearby residents.

“There’s never been large-scale (carbon capture and storage) development in the state. Few people in California have even seen a permit for a project, let alone reviewed and commented on one,” she added. “This isn’t something that we should be rushing through.”

Another bill approved by the Legislature, AB 1757, would require the state to set targets for removing planet-warming carbon from the atmosphere with nature-based methods, such as planting trees, restoring wetlands and scaling up public landscaping and urban forestry projects. The bill received widespread support from environmentalists, who say nature-based solutions to combating the existing amount of greenhouse gas emissions in the air is a better approach than relying on engineered technologies.

“Natural carbon sequestration is the only way to draw down and sequester carbon this decade while combating heat, drought, and wildfires,” said Ellie Cohen, CEO of The Climate Center, an environmental advocacy organization that lobbied for the bill.

But farmers and grower associations opposed the bill, saying it would be economically unfeasible for them. They say the state could develop targets based on technologies that are not accessible for most farmers and drive small farms out of business.

The late push from the governor’s office was enough to overcome — just barely — the entrenched opposition that twice has shot down other bills to establish buffer zones around oil and gas wells.

Considering the power wielded by California’s fossil fuels industry, the victory for a public health bill — which, if signed by Newsom as expected, will prohibit new oil and gas development in neighborhoods — is considered a heavy political lift.

The bill stalled in the Senate on Wednesday morning, and voting was put on hold while its authors scraped around for votes. Members were vacillating, said Sen. Lena Gonzalez, a Democrat from Long Beach and the bill’s co-author.

“We were looking for votes all day, it was a mess,” she said.

Previous legislative incarnations of setbacks fizzled, but those attempts did not have the benefit of Gov. Newsom’s blessing.This time around, Newsom included the setback bill, sponsored by Gonzalez of Long Beach and Limón of Santa Barbara, in his climate package and it gained urgency.

It also requires operators to take certain steps at the thousands of existing wells within that buffer zone. Included is a plan to monitor toxic leaks and emissions, and install alarm systems. In addition, new requirements would include limits on noise, light, dust and vapors.

Nearly 3 million Californians live within 3,200 feet of a working oil or gas well, largely in Kern and Los Angeles counties. Scientific and medical analysis indicates that people living near wells are at higher risk for asthma, respiratory illness and some cancers.

The majority of those living near oil facilities are people of color, creating an environmental justice imbalance, Gonzalez and Limon argued during sometimes heated debates in both legislative chambers.

The bill is similar to a regulation in the works from CalGEM, the state’s oil and gas regulator. But that regulation is still being formulated and a long way from being implemented.

Limon said after the vote that she was particularly gratified to see residents from the affected neighborhoods advocate for the setbacks, allowing minority communities to speak for themselves before the Legislature.

Michelle Ghafar, a senior attorney with the group Earthjustice, said overall the legislation is an improvement. “We want to get wells out of neighborhoods,” she said. “There is no safe distance from oil and gas extraction.”

But the bill relies on so-called engineering controls to address leaks and emissions from oil wells rather than prevent the problems before they occur. “You don’t want the problems to get to that point. In practice, they often fail,” Ghafar said.

The bill had been labeled a “job killer” by the state Chamber of Commerce, a criticism that has been taken up by a wide variety of trade unions. Other opponents during Wednesday’s heated hearings, including state Sen. Shannon Grove, a Republican from Kern County, said it would increase importation of oil from countries that don’t have robust environmental regulations.

Dahle noted the long history of drilling in California, which in its early days took place in rural areas that are now built up and populated. He said it’s unfair to crack down on existing oil operations.

“These oil wells were there before the communities were there,” Dahle said.