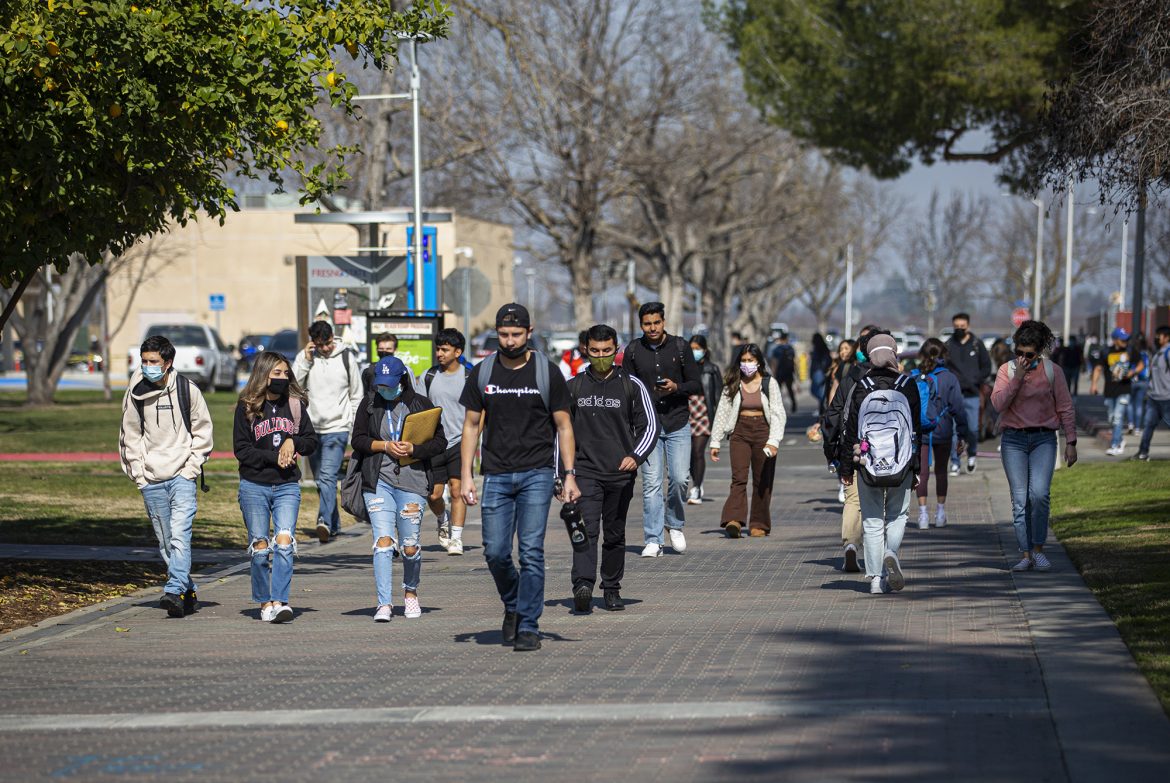 Students walk across campus at Fresno State on Feb. 8, 2022. Photo by Larry Valenzuela for CalMatters

A last-minute bill that sailed through the Legislature may leave Cal State University on the hook for nearly $900 million in new costs over the next decade — possibly forcing it to raise tuition for only the second time in more than a decade.

That “may” assumes lawmakers allot no new increases in university funding. Gov. Gavin Newsom has actually proposed giving the system more than a billion dollars in extra state support through spring of 2027, but there’s no guarantee that will happen. What would be guaranteed by this bill is the extra expense.

Now Newsom is faced with a choice: sign Senate Bill 410 that would raise the wages of Cal State’s relatively underpaid non-academic staff and ensure the system receives its promised infusion of state cash, or veto it, angering 30,000 unionized employees in a state where labor groups have considerable political sway.

Adding to the intrigue is that Democratic lawmakers approved the legislation knowing Cal State would likely have to cut services or raise tuition barring extra state funding.

“Yes, we don’t want to see students suffer, but what message are we sending to students that you get to come and get this education on the backs of these workers,” said bill author Connie Leyva, an outgoing Senate Democrat from Chino who wrote the bill. “That’s not a good life lesson.”

“We do not oppose giving staff the salary that they deserve to have,” she said then. “We do oppose being directed to take it from current funds.”

Newsom has until Sept. 30 to decide the bill’s fate.

The bill in detail

Cal State’s staff — the maintenance, office and groundskeeping workers who keep the system’s buildings and operations humming — earn 12% less on average than similar workers at both universities and the broader workforce, according to a 2022 study lawmakers funded.

Leyva’s bill, which higher-education staff unions support, would implement the recommendations of that study and introduce a series of raises over 15 years based on good performance. Employees would earn raises of 5% annually for the first five years, then every two years, and another 5% raise in their fifteenth year of employment.

Cal State is the only state agency in California without salary steps, Leyva told lawmakers. These steps would kick in at the start of 2023; Leyva rejected a suggestion by another lawmaker to delay the start date by a year.

Unlike most bills that move through the Legislature over a period of months, Leyva’s salary increase proposal debuted only two weeks before the deadline for bills to pass.

Cal State officials told its Board of Trustees at last week’s meeting that the bill as law would cost $287 million initially and build toward $878 million after 10 years.

After two years of no raises, the largest staff employees got a 7% raise this June, paid for in part by pulling money away from student graduation initiatives, but that’s still short of the recommendations called for in the staff study.

How short is tough to calculate because “it’s not like every person is exactly 12% below” the market rate, said Andrew Heller, research analyst at the 15,000-member California State University Employees Union, during an interview in July. The April study found that the Cal State system paid some employee groups 20% below the market median pay; other groups were on par with what other workers earned.

Can Cal State afford this?

By one measure, the system should be able to absorb the bill’s costs and still have funds left over for other commitments, such as more dollars for faculty salaries. The bill would cost the system roughly $50 million annually on top of the $287 in initial costs, according to Ryan Storm, assistant vice chancellor for budget at Cal State. The system is preparing a similar study on faculty, who are also underpaid, said Jack McGrory, a Cal State trustee.

But a promise isn’t a guarantee, said Storm in an interview.

“While there’s a commitment by the governor to propose additional funding that’s in excess of a billion dollars, there’s no guarantee of it either, but there would be a guarantee of costs if this bill would pass.”

If Newsom signs the staff salary bill, the Cal State system must pay workers the higher wages with existing funds. It’s a fixed cost no matter the system’s fiscal situation or the condition of the state’s economy.

Past higher-education compacts in California have fallen short of their goals, the Legislative Analyst’s Office wrote this year. “Former governors rarely (have) been able to sustain their compacts over time,” the analyst’s office report said. “In some cases, changing economic and fiscal conditions in the state have led governors to suspend their compacts.”

Indeed, fears of a recession are an increasing worry in Sacramento and nationally. A slowdown in the economy would mean less revenue for the state’s coffers — and likely less support for Cal State. Early in the pandemic, Cal State endured a cut of $299 million just a few months after Newsom signaled it would receive a boost of $199 million dollars — a promise of 5% growth that never was.

The system funds its education mission with $4.6 billion from state support and $3.1 billion from tuition. Both lawmakers and the governor need to approve how much the state sends the university.

An August bill analysis by legislative staff warned that “it is likely that (Cal State) could increase tuition” to cover the costs of this bill. If that were to happen, most low-income students wouldn’t pay more because the state’s Cal Grant that waives tuition fees would automatically cover the increase. Middle-class students would see a tuition spike, but a new state grant would likely soften the blow and in some cases cover the difference.

Before voting to pass the staff salary bill at a committee hearing last month, Democratic Assemblymember Jesse Gabriel of Van Nuys said blame should go to lawmakers, “who have chronically underfunded public higher education in the state of California.”

“We’ve forced the university into difficult decisions where it’s seeking to balance its budget on the backs of workers, which is totally inappropriate,” Gabriel added.

Cal State’s Board of Trustees hopes Gabriel can rally his peers to marshal more dollars for the system. Last week the trustees voted to approve a budget request of $530 million in new ongoing funding — well above the $227 million Newsom will ask lawmakers to green light next year.

However the budgeting math shakes out, Cal State’s 500,000 students are urging the people in charge to not forget about them.

“Raising tuition or cutting essential student support services is an unacceptable way to fund” Leyva’s bill, the Cal State Student Association wrote to lawmakers. The students asked Cal State, unions and lawmakers to “identify a funding stream that will do no harm.”