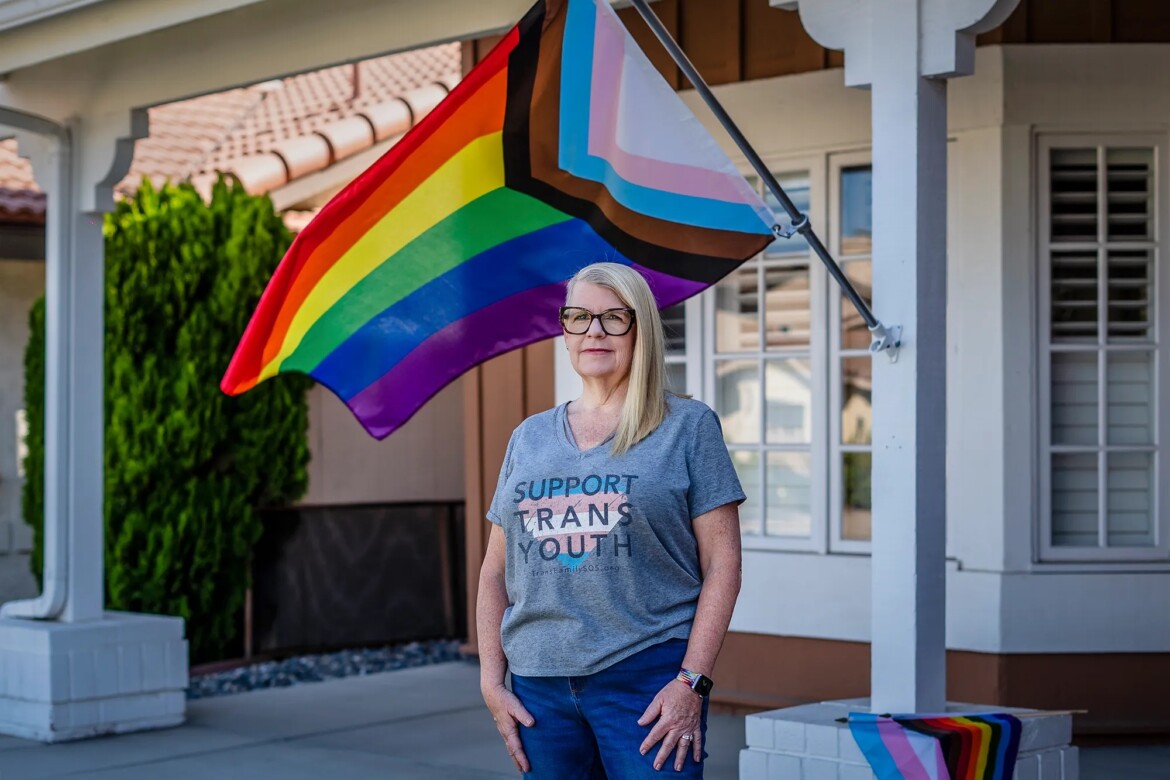 Kathie Moehlig, founder of TransFamily Support Services, at her home in San Diego County on Aug. 26, 2022. Photo by Ariana Drehsler for CalMatters

When Kathie Moehlig’s 11-year-old son decided to transition in 2012, she says not one doctor in San Diego was willing to treat him. “When I called to make appointments, they kept telling me: ‘We don’t treat kids like that here,’” Moehlig said.

But she continued making calls, eventually breaking through at Rady Children’s Hospital. Her efforts drew attention from other families of transgender kids, many of whom began asking her for help.

She decided she “couldn’t just be a family friend,” so eight years ago she started TransFamily Support Services, a nonprofit that offers a multitude of services to hundreds of families of transgender individuals across the country, including support groups, assistance navigating the medical system, and — most recently — political advocacy.

Now, TransFamily Support Services is a co-sponsor of Senate Bill 107, which would protect from prosecution patients who travel to California for what supporters call gender-affirming care and doctors who provide that care.

On Monday, the Assembly gave its final approval to the bill in a 48-16 vote. If the Senate agrees in a concurrence vote expected today, the bill heads to Gov. Gavin Newsom.

If signed, the bill would make California a refuge for minors seeking gender-affirming care, similar to how Assembly Bill 1666, which Newsom signed into law in June, made the state a refuge for those seeking abortions.

“It will send a very clear message that trans kids and their families, if they don’t feel safe in their state, they can come here and we’ll do everything in our power to protect them from prosecution,” state Sen. Scott Wiener, a San Francisco Democrat and the bill’s author, told CalMatters.

The bill, perhaps the highest profile of several LGBTQ-related proposals already on Newsom’s desk, responds to a recent wave of legislation: At least 40 bills in 20 states would restrict access to gender-affirming medical care for transgender youth. These proposals vary from an Idaho bill to criminalize gender-affirming medical procedures to a Florida law banning their insurance coverage. In Texas, state social workers are reportedly rebelling — or even threatening to quit — rather than carry out an order by Gov. Greg Abbott to investigate parents who allow transgender health care.

Proponents of the bill say it is California’s responsibility to intervene.

“There are efforts all across the country…to go after trans kids and their families. California has a role to play in providing a safe, welcoming environment for trans kids and their families to get the care they need,” said Samuel Garrett-Pate, managing director of external affairs for Equality California, which supports the bill and says it’s the nation’s largest LGBTQ civil rights group.

“As it stands, transgender youth and their parents in these states are under a constant threat of being reported by anyone around them, while foregoing life-saving treatment,” said Assemblymember Lori Wilson, a Suisun City Democrat and parent of a trans person, in presenting the bill on the Assembly floor on Monday. “In doing so, they are targeting our most vulnerable population — children — as well as their parents and doctors who support them.”

No one spoke against the bill on the Assembly floor.

By leaning into the national debate around transgender issues, the bill has generated intense opposition.

Opponents say that children often misunderstand their gender identity and are likely to regret their decision to get irreversible treatments such as hormone replacement therapy and gender-affirming surgery.

“A lot of kids don’t quite comprehend the implications of taking puberty blockers, cross-sex hormones and even some of the surgeries; don’t comprehend the long-term nature and the damaging effect it would have on their on their bodies when they were minors,” said Greg Burt, a spokesperson for the California Family Council.

“SB 107 is circumventing states’ laws and that have needed safeguards in place so my story’s not repeated. Children cannot consent,” said Cole, a 17-year-old from the Central Valley, who medically transitioned from age 13 to 15 with puberty blockers, male hormones and a mastectomy.

Given this, Burt said the religious nonprofit “would be against any kind of drugs or surgeries to try and match a person’s body to their feelings below the age of 18,” regardless of parental consent.

“We don’t let parents sterilize their kids, even if parents consent to it, and we think this is in the same category,” Burt said. “You can’t harm your child permanently, even if you believe the harm is somehow justified.”

Opponents also highlight a clause in the bill that they say could take custody rights away from an out-of-state parent who disagrees with the other on their child’s gender-affirming care.

Erin Friday, a San Francisco attorney and parent of a child who once wanted to transition, said that the clause “pits parents against parents” by allowing an out-of-state parent to refile for full medical custody of their child in California and eclipse the consent of the non-affirming parent.

Wiener’s office disputes that this is the bill’s intent.

“The point of the bill is not to remove kids from their parents’ custody — not when parents come here with their kids to prevent states like Texas from removing them from their custody,” he said.

As the political debate rages on, Moehlig and her staff of 10 continue their work, helping families across America figure out the best doctor and how to get insurance coverage, and providing support groups for people from elementary school to age 30. She says her group has assisted 3,000 families in its lifetime.

That work convinces her of the importance of the bill. She said it’s “ludicrous” for politicians to assert that they know better than the parents of transgender children and their doctors about what medical care and treatment is best.

As of now, every law that criminalizes gender-affirming care in other states has been delayed by legal challenges. Moehlig, however, said it’s only a matter of time before one of these bills becomes law.

And she’s already seeing the impact: She said she has multiple clients who have moved to California because of the laws in other states. One of her clients in Texas said his doctor canceled his female-to-male top surgery because they were no longer comfortable treating transgender youth.

“I think that protecting the rights of these parents to make these medical choices and get this treatment for these kids without having to worry about any of the ramifications of prosecutions is super important,” Moehlig said.