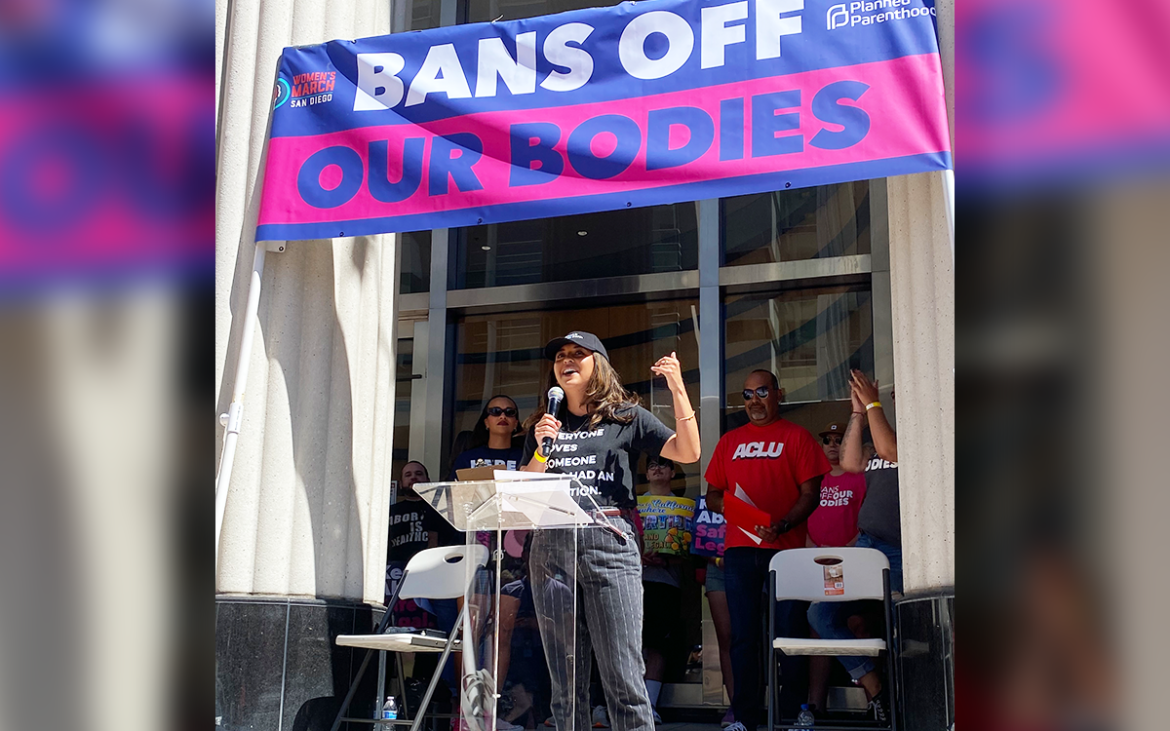 Jessy Rosales spoke at a San Diego "Bans Off Our Bodies" rally in May. During college at UC Riverside, Rosales was a coordinator for the justCARE Campaign which supported SB 24, The "College Student Right to Access Act." CREDIT: JESSY ROSALES

When Jessy Rosales was a 20-year-old student at UC Riverside, she had a second-trimester abortion.

While she was not initially certain she was pregnant, a visit in the fall of 2016 to her campus’s Student Health Services clinic confirmed it.

The next steps were “a no-brainer,” Rosales said — she wanted an abortion. “The reason why that was so logical is because deciding to parent is a huge, life-altering decision,” she explained, and she wanted to keep her life on her planned trajectory.

As a young student, Rosales said, she had a lot of growing up to do, more to discover about her queer identity, financial stability to achieve and a college degree to complete. Ultimately, she was not ready to become a parent.

“I had so many dreams and possibilities of things that I could be and who I wanted to be,” Rosales said.

Despite her certainty in the decision, it took Rosales three months to get an abortion. Multiple factors contributed to the delays, but she said that “the medical system creating unnecessary leaps and hurdles” was largely to blame.

Without ultrasound technology at her campus health center, Rosales did not have confirmation of the length of her pregnancy after the initial positive test.

As a first-generation American, Rosales said she struggled to navigate the medical system and understand insurance jargon.

Additionally, she was learning how to be financially independent and on her own for the first time, while also taking tough courses after switching her major.

All these factors made it challenging for Rosales to make appointments and calls. In the meantime, her pregnancy kept progressing.

“Pregnancies don’t wait for anybody,” Rosales said. “The fetus is going to keep growing.”

If medication abortions had been offered at UC Riverside when Rosales was a student, she would have likely qualified. “My story would have probably just ended there, right?” she said.

But because of the barriers, Rosales passed the 10-12 week threshold for a medication abortion. Instead, she had a surgical abortion costing about $600-700, which used the rest of her financial aid money for the calendar year.

Even before Rosales became pregnant, she was involved in reproductive justice activism and served as president of Planned Parenthood Generation Action at UC Riverside. Her “unwanted pregnancy” just pushed her to become more involved.

“It became fuel to my fire because I really understood how difficult it was to access choice for me,” Rosales said.

She also became a coordinator for the justCARE campaign, which supported SB 24, the College Student Right to Access Act.

Gov. Gavin Newsom approved the bill in 2019, and ever since, CSU and UC campuses have been prepping their student health centers. So far, none of the CSU campuses offer medication abortions, and options at UC vary between campuses; but both systems have committed to offering these services by the bill’s Jan. 1 deadline.

How are campuses preparing?

Directors and staff members at CSU campus health centers have been involved in training to implement the bill’s mandates, according to an email from Toni Molle, strategic communications director at the CSU Chancellor’s Office.

Financially, SB 24 provides one-time funding to make the necessary updates to campus health centers like the ones that Sacramento State is making. In addition, the CSU has been working with the Commission on the Status of Women and Girls on funding allocations and agreements through a shared memorandum of understanding; each CSU campus will receive $200,000, according to Stewart-James.

Sacramento State will offer medication abortions with a slight cost to students, as it does other health care services, Stewart-James said. “Just as there is a cost for any prescribed medications, students will incur the cost of the abortion medications, which are estimated to be between $50-$60.”

While Sacramento State has had “great referral relationships” with community medical providers for care outside the scope of Student Health and Counseling Services, Stewart-James said access to medication abortion care will be even simpler for students.

“Medication abortion is an important part of primary care and access to safe abortion care will now be easier for students,” Stewart-James said via email.

Similarly, UC student health center directors are working to implement the bill’s mandates by the January deadline, said spokesperson Heather Harper from the UC Office of the President in an email.

All UC campus health centers provide students with access to “comprehensive reproductive health services,” and students who are covered by the UC Student Health Insurance Plan can access abortions elsewhere through referrals and UC academic health centers on other campuses if their student health center does not currently provide them, according to Harper.

All UC campuses are implementing the requirements in a slightly different manner, depending on their local resources, according to Dr. Cindy Schorzman, medical director at UC Davis Student Health and Counseling Services.

UC campuses that work closely with their local hospitals, like UC Davis, plan to rotate OB-GYN specialists through the student health center to provide medication abortions on-site. Other campuses are training their own providers without relying on outside OB-GYNs.

UC Davis plans to offer medication abortions starting this fall. “We welcome the opportunity to bring the services even closer and more available for students,” Schorzman said.

Schorzman noted that prior to the requirements of SB 24, specialists were already providing care at Student Health and Counseling Services, “and they’ve done a fabulous job at helping address a variety of concerns that you would see a gynecologist for.” The protocol has involved UC Davis’ student health services referring students to clinics within a 5-mile radius for abortion services.

Schorzman continued, “The reason we hadn’t looked to bring the services in-house sooner (is) because we have such close ties with our community resources.”

Medication abortions will be available for all registered UC Davis students, but coverage will depend on the student’s insurance. Schorzman anticipates it will be well-covered by UC’s Student Health Insurance Plan. If a student experiences financial barriers, Schorzman said, students can apply for the UC Davis Health Equity Fund to help cover their expenses.

“We really want to make sure this is accessible for everyone,” Schorzman said.

While many UC campuses are scrambling to prepare their health centers to meet SB 24’s requirements, one campus is ready now.

UC Berkeley’s health center has to do nothing further to comply — it has offered abortion medication for students since 2020, according to University Health Services gynecologist Dr. Eleanore Kim.

The medication, mifepristone, is offered to students who have been pregnant for up to 70 days, or 10 weeks, according to the University Health Service’s website. Students can access this medication by first answering a questionnaire on the online health services portal; if they meet the criteria, they are contacted to make an in-person appointment. The website adds that questionnaires are review by the next business day.

Kim said she feels that abortions are among services that students can have trouble accessing, whether it’s because clinics are far away or the costs of abortions are too high.

Although offering abortions on campus may not completely remove roadblocks for students, according to Kim, it does reduce them. She added that providing abortions aligns with the primary purpose of campus health centers: to give students some convenience so they can stay healthy while in school.

Students whose pregnancies are past 10 weeks usually can access abortions at private clinics, private gynecologist offices or Planned Parenthood, Kim said. Before the UC Berkeley health center offered the medication, students typically had to go that route.

Kim believes the U.S. Supreme Court’s recent decision overturning the 1973 case that established the right to an abortion will affect the state.

Left out of the language of SB 24, California Community Colleges are not required to provide medication abortion services by January. Many, however, still offer resources and guidance for students looking for abortion care, much like most UC and CSU campuses prior to SB 24.

Deborah Herzik, nurse practitioner at El Camino College Student Health Services, said she believes SB 24 was not extended to California Community Colleges because these campuses do not have adequate medical facilities, making them unprepared to implement services of this kind.

However, Herzik said that El Camino College and many other community colleges still offer sexual education, birth control programs and Plan B pills, as well as free condoms and pregnancy tests to their students.

But as SB 24 is soon to be the standard at CSU and UC campuses, Rosales is feeling optimistic.

Since she started sharing her abortion experience with others, Rosales has heard similar stories about barriers and delays in receiving care at UC Riverside. With the approval of SB 24, she is confident that students across UC and CSU campuses will experience greater access to medication abortion.

“I totally wholeheartedly believe that this bill is going to help, and it’s going to change people’s lives,” Rosales said.

Annais Garcia contributed to this story.