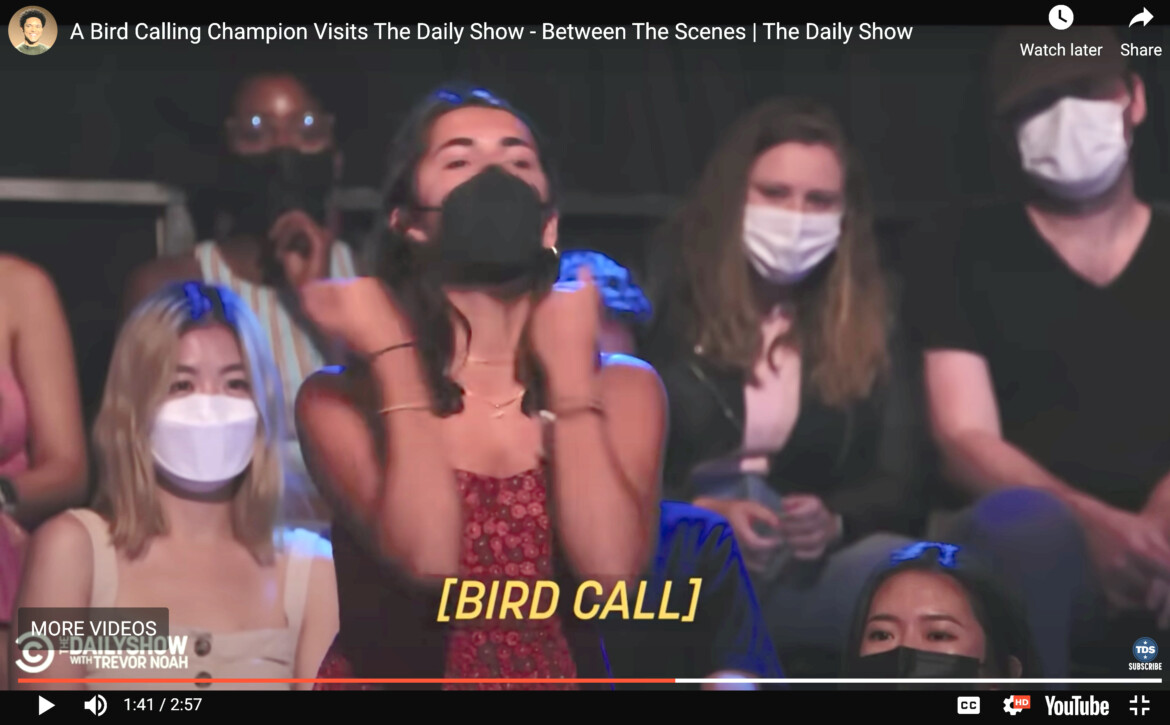 A clip from the Daily Show with Trevor Noah went viral this week, reviving interest in Piedmont’s bird-calling contest, a long-running high school tradition until 2019, when a combination of circumstances — the end of its Letterman Show showcase, declining student interest, theater renovations, and COVID — led to its (temporary?) demise.

It was a random set of circumstances that landed PHS grad Maya Guzdar — a 2016 contest winner (with classmate Kay Sibal) — in the audience of the show on August 1.

“I was visiting New York City and one of my best friends from college, Sarah Lee, won free lottery tickets to the show. We were sitting kind of front and center in the audience and I had been telling her about the bird-calling contest and joking about it — my college friends think it is so bizarre. Anyway, the special guest that day was Pete Buttigieg, and before he came on there was some free time. So Trevor turned to the audience and asked if anyone wanted to ask a question. I raised my hand without really thinking, assuming others would, too, and also assumed there was no way I would get called on. But … apparently I was the only one who raised a hand!”

You can watch what happened next here:

As they left the show, two ushers approached the girls to let them know the exchange had been filmed and that there was a “100% chance” the scene would get replayed by the show on social media later because it was so funny.

Despite the wide exposure the clip has generated — another PHS alum and SNL regular, Chloe Fineman, shared it on social media — Guzdar recognizes the Daily Show might actually not be a good fit, but nevertheless hopes another late-night show might be persuaded to pick it up if Piedmont revives the tradition. “Piedmont was a little intimidating when I first moved there and a little too ‘perfect'” she said. “This contest is a fun, silly event that brings people together and I really hope it starts up again.”

Past organizers of the production say it will take an enthusiastic PHS teacher or admin with extra time to run the show as well as a committed student body and community support.

A brief history of the contest, from the PUSD website:

“Wax,” a student asked one lazy afternoon in 1963, “can we do something to liven things up around here?”  With this request in mind, Mr. Leonard J. Waxdeck recalled an interesting experience from his factory days and created the show that everyone knows today as the Piedmont High School Bird Calling Contest.