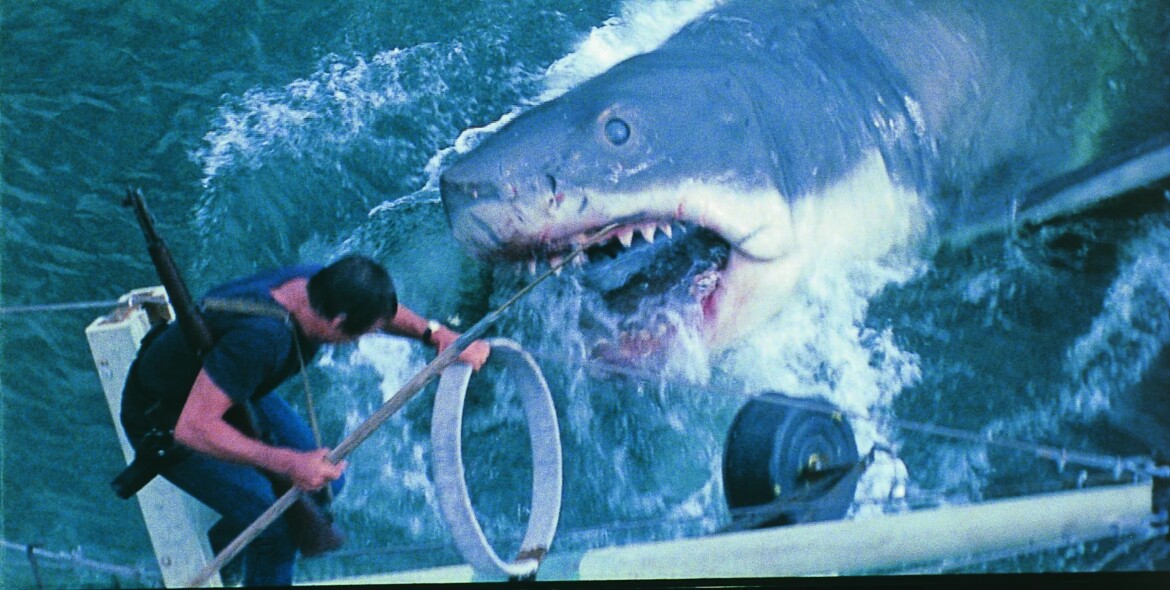 In 1975's "Jaws," Sheriff Martin Brody (Roy Scheider) discovers the hard way that the crew onboard the Orca required a bigger boat to tussle with a killer white shark. (Photo courtesy Amblin/Universal)

This Labor Day weekend a few theaters are going retro, flashing back to cinematic treasures and guilty pleasures that we never grow tired of rewatching.

Here’s how you can revisit some goodies.

Wanna hit the virtual beach this weekend? Proceed with caution and don’t listen to anything that sleazy, sideburned bozo of an Amity Island mayor advises about the oceans being free of sharks.

That’s right, landlubbers, Steven Spielberg’s ultimate shark movie “Jaws” chomps its way back into theaters, more than 40 years after that blockbuster release rocked moviegoing boats forever. And all of it still floats.

The 1975 shocker receives the IMAX treatment, and that means “Jaws” will be the most exciting film release this week. Spielberg’s brilliant creature feature puts all others to shame as it slowly reveals what that one-track-mind predator looks like. From the often-imitated yet never rivaled opening thriller sequence wherein John Williams iconic score foreshadows Chrissie’s imminent savage oceanic demise and on to the dread-mongering voyage of three wannabe heroes — played so well by Roy Scheider, Robert Shaw, and Richard Dreyfuss — as they set sail to slay their “Moby Dick,” Spielberg’s sleek, beautifully engineered model of suspense is basically a horror film, and is also one of the best movies ever made.

Now’s your chance to scream, squirm and yell at the antics of Bruce the Shark on the big screen, and see why “Jaws” the film is leagues better than not only its effective source material — author Peter Benchley’s gripping thriller — but also most any other monster movie. (https://www.imax.com/movies/jaws)

If you relish cheesy movies with a delicious-looking QB blond hunk (Sam J. Jones) and a killer Queen soundtrack, beam over to see “Flash Gordon” at the Roxie.

Director Mike Hodges’ astro-bright sci-fi bit of nonsense is ultra-goofy. Gratefully, it’s all done with tongue in cheek, perhaps an intention most critics failed to grasp when it crash-landed in theaters in 1980. It screens at 9:05 p.m. Saturday. (https://www.roxie.com/ai1ec_event/staff-pick-flash-gordon/)

Singer/actor Olivia Newton-John, a beloved icon who many were hopelessly devoted to, gave cancer the best fight anyone could. But in the end, it claimed her life. Her radiant presence and kindness, along with her desire to make the planet a better place, lives on, reminding us how certain celebrities can rise above others.

A frequent punching bag for music and film critics, Newton-John defied all of them with No. 1 songs and No. 1 movies. One movie musical many considered a huge disaster — 1980’s ridiculous roller-boogieing “Xanadu” with Michael Beck and Gene Kelly — wound up a cult hit. Deservedly so. Robert Greenwald’s perky curiosity mixes Newton-John songs with catchy Electric Light Orchestra ditties and even went on to become a Broadway musical.

Lace up those roller skates, people, this Thursday and skate over to Oakland’s New Parkway Theater for some magic. (https://www.thenewparkway.com/)

Over at the Castro Theatre this weekend, you’ll encounter one of the most engaging cinephiles you’re ever likely to meet — critic/film historian Jesse Hawthorne Ficks. He hosts a splendid 70mm screening of Alfred Hitchcock’s classic, San Francisco-set noir, “Vertigo.”

The cynical and seductive 1958 portrait of unchecked obsession — a favorite topic of Hitchcock — withstands the test of time, and features one of the most shocking finales ever. Jimmy Stewart and Kim Novak star. As a bonus, Diane Baker, who appeared in Hitchcock’s sexually messed-up “Marnie,” will join Ficks onstage to talk about the complicated filmmaker.

Should you want to journey into the heart of darkness, put on your grim face and head on over Friday to the Smith Rafael Film Center for Francis Ford Coppola’s “Apocalypse Now: Final Cut,” the iconic and surreal Vietnam War masterwork starring Marlon Brando, Robert Duvall and Martin Sheen.

The 1979 sensation remains an intense, visceral experience that’s best experienced without any distractions and interruptions during its three-hour-plus running time. You can witness Coppola’s sweeping spectacle in all its cinematic glory, including that legendary helicopter scene to the accompaniment of “Ride of the Valkyries” score. (https://rafaelfilm.cafilm.org/apocalypse-now/)

As for new films, the well-reviewed documentary “Kaepernick & America” takes the long view on Colin Kaepernick, the former 49ers QB, and looks at his simple act of protest to reflect, through interviews with others, how volatile and charged racism remains in this deeply divided nation. It’s available to stream Friday.