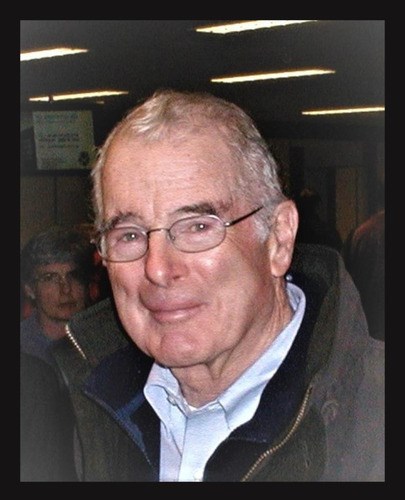 With wind in his face, and a little ocean spray, he’s sailing away.

Tony, as he was known by all, loved being the patriarch of a sizable clan and presiding over “August” family occasions. He cherished his wife Ann (nee Bakken) and their 69 year marriage, his three daughters Kathleen (husband Mark), Barbara (husband John) and Elizabeth (husband Jim), his twin sons Erik (wife Leslie) and Kurt (wife Cynthia), his eleven grandchildren, their partners, and his great-grandchildren. And they will forever hold Tony in their hearts.

Tony delighted in sailing, Tahoe time, friends, cycling, family gatherings at Sun River, raviolis, the annual Big Games (go Cal!), probate law, colleagues, camping, music, a good book, backpacking, whiskey sours, traveling abroad, and Fenton’s hot fudge sundaes. He could not, however, abide his young children stirring their ice cream or putting their elbows on the dinner table. He mellowed over the years; his grandchildren could get away with anything.

At the age of ten, Tony moved to Piedmont with his father Herman Trutner III, his mother Evelyn, his brother Tom and his sister Fritzi, and remained a resident of Piedmont (except for relatively short stints in the US Army and at the Delta Tau Delta house at UC Berkeley) until his death at the age of 94. Classical music coursed through his blood (his father and grandfather were both professional musicians who played French horn for the San Francisco symphony), but he was also a huge fan of the Beatles.

Tony adopted his unique approach to carpe diem at an early age. During the summer of ’49, he and three other UC Berkeley Delts pooled $100 to purchase a convertible Oldsmobile, with no top, in which they spent two months on the road traveling to New York and back to Berkeley. The four buddies (who remained lifelong friends) limped along on used oil and retread tires, taking turns sitting in lawn chairs in the dilapidated rumble seat. Tony proclaimed himself the “transportation leader,” having bought and sold more than 16 cars before his 18th birthday, the first being a convertible Model A. He earned the seed money working at the Cole honey factory on Piedmont Avenue.

Tony’s ambition and sense of adventure led to his decision to enroll in night law school while working as a trust officer with three young daughters at home. Ann gave birth to their twin sons before he graduated. Tony’s career as a trust and estates lawyer spanned six decades. It began at the firm then known as Burnhill, Rhode, Moffitt and Moore, which over the years morphed into Larson, Burnham and Trutner. At the age of 63, Tony became a sole practitioner, and did not fully retire until age 88. Tony was known for problem solving and often served as a neutral administrator or trustee. His daughter, daughter-in-law, and grandson, all attorneys, are grateful for his mentoring.

Through the years, Tony cycled the Pacific coast with his wife and teen-aged sons, sailed a chartered yacht in the Aegean Sea, and captained his sailboat in the Transpac race from Los Angeles to Hawaii. Tony’s membership in the Single Handed Sailing Society as captain-owner of the 41 foot Regardless was a source of great pride and sensational stories. Tony and Ann traveled the world, often with friends known since college and even earlier, until well into their 80s. Cruising in Antarctica, traveling by train across Russia, and riding tuk tuks in Bangkok were beloved memories.

His sails were always full. The wind is behind you, Tony. Time to set the spinnaker.

Published by San Francisco Chronicle on Jul. 28, 2022 and reprinted here with the permission of the Trutner family.