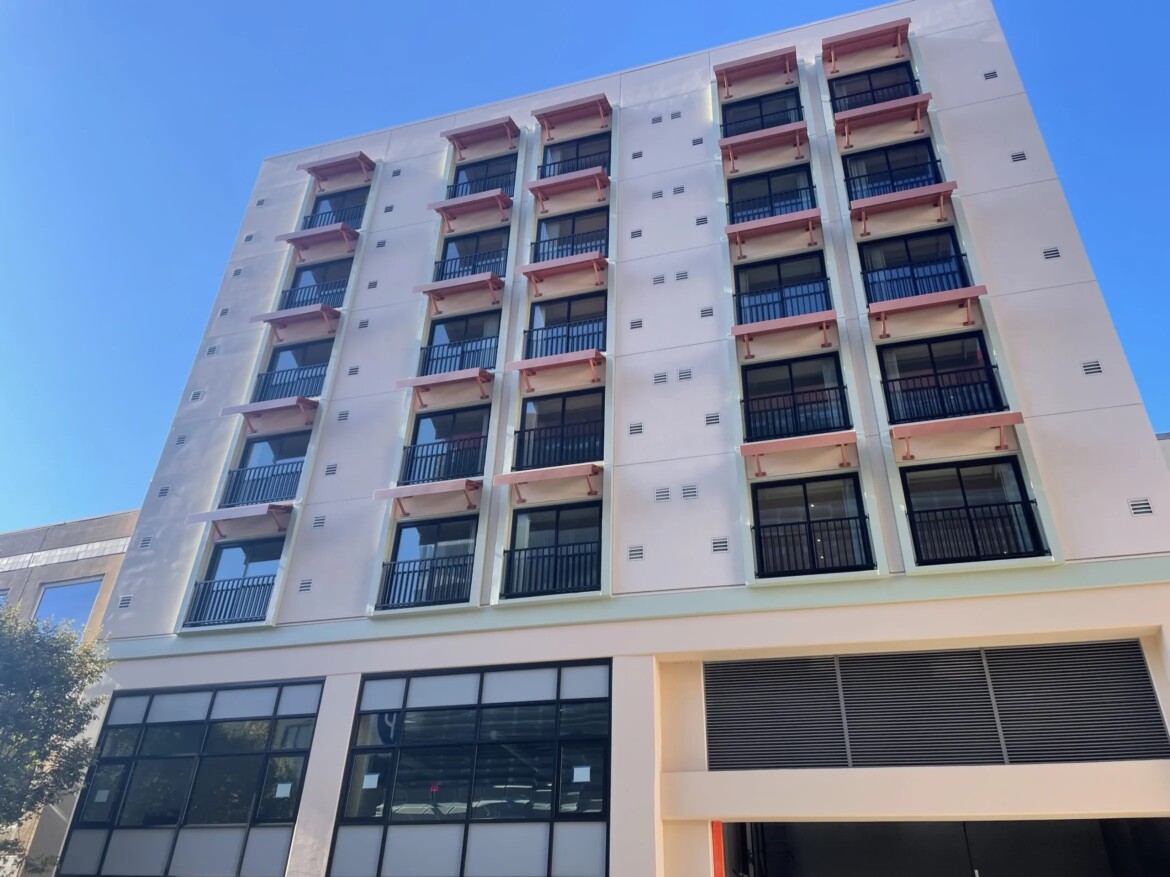 The same week tensions came to a head over the prospect of building housing at UC Berkeley’s People’s Park, another longtime residential project evolved just a few blocks away. Over at 2009 Addison St., a new apartment building was receiving final touches before its planned opening in September. It will have full amenities, exclusive clientele and the backing of one of the most prominent performance organizations in the country. It also finally has a name: the Medak Center. The performance organization is the renowned Berkeley Repertory Theatre, and the new building next door is named after Susie Medak, the Rep’s managing director and a driving force behind the creation of the complex.

As explained to me by artistic director Johanna Pfaelzer — who inherited the project and took her role in 2019, the same year the complex broke ground — the Medak Center apartment complex will act as a “home away from home” for talent not local to the Bay Area.

“[We are] ensuring that there is safe, accessible housing next door to the theater, with costs that will be predictable instead of subject to the vagaries of the Bay Area housing market,” Pfaelzer says of the center, which will also house members of the Rep’s fellowship program.

The LEED-certified building will also feature a 1,500-square-foot production studio, classrooms on the second floor and a loading dock for the Rep’s Roda Theatre. Most of the educational facilities haven’t been as readily available to the Rep since it vacated the Osher Studio on 2055 Center St., now known for staging works by the Bay Area Children’s Theatre. For Medak — who taught 15 years at Yale School of Drama, is an assistant lecturer at UC Berkeley and is the founding chair of the Berkeley Arts Education Steering Committee for the Berkeley Unified School District — the opportunity to once again combine education with the Rep’s high standards is an opportunity she welcomes.

“When we gave up the Osher Studio about 12 years ago, we lost three classrooms,” she tells me. “We have scrambled ever since then to accommodate the growing demand for classroom space. When Johanna was hired — with her exciting goal of bringing the community into closer engagement with our new play development work — the new space took on more urgency as the two spaces right there on Addison St. will provide high-profile locations for the public to be able to ‘see into’ the work as it’s in progress.”

Given her educational credentials, her experience with UC Berkeley and the aforementioned People’s Park situation, I asked Medak what influence, if any, the nearby institution had on the center’s development.

“The university was a factor only in that every new downtown housing complex built in the past 25 years has quickly become student housing,” she says. “That has exacerbated our housing challenges.”

Both Pfaelzer and Medak emphasize that community outreach was a major consideration throughout development. In addition to the large windows allowing Berkeley residents and visitors to observe play development in progress, the building will also feature, according to its official specs, an “organic vegetable garden on the terrace and have monthly workshops on organic gardening for residents.”

Although Pfaelzer’s tenure with the Rep is still in its relative infancy, she’s confident that the completion of, and access to, the center “means that we can continue to create work of significant scale with artists from all over the world.”

As for Medak, after nearly a decade of work on the center, she’s humbled by the honor of having it bear her name. As she concludes her 32-year tenure at the Rep, she has no plans for other such daunting projects in the immediate future.

“I think we all hope that this is our last capital project for a very long time,” she says. “Our goal now is to focus on producing important and compelling work for our community.”

The Susie Medak Center is scheduled to host its building dedication ceremony on Sept. 3, with the official project completion date scheduled for two days later.

Charles Lewis III is a San Francisco-born journalist, theater artist and arts critic. You can find dodgy evidence of this at https://thethinkingmansidiot.wordpress.com/project-type/journalism/.