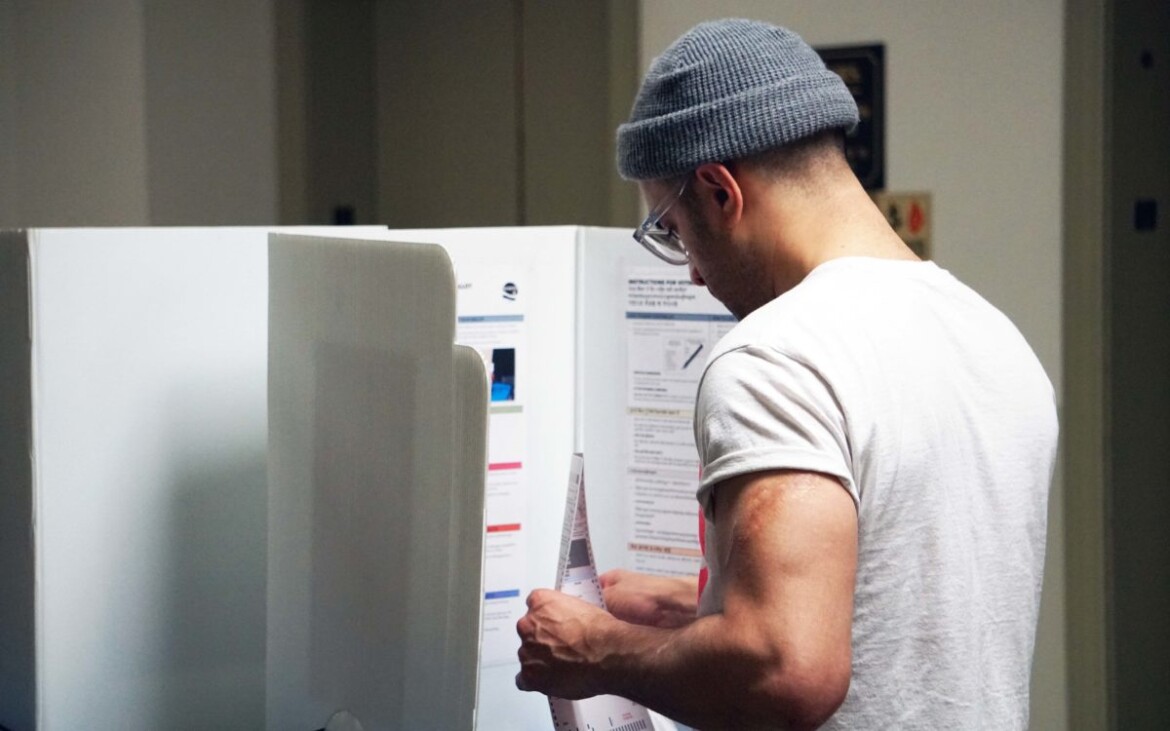 A voter casts their ballot in Oakland in 2020. PHOTO: ANDREW REED/EDSOURCE

Three years ago, Melissa Rodriguez and dozens of her peers in Oakland Unified had a bold idea. Unhappy with the civics education at their schools, among other issues, they decided to enact their own real-life civics lesson: by fighting for 16- and 17-year-olds to have the right to vote in school board elections.

They circulated petitions. They went door to door in every neighborhood of the city. They collected endorsements and raised money for advertising. They did email blasts, social media campaigns and phone banking. And in the fall 2020 election, they won. Measure QQ passed with almost 68% of the vote.

But that, so far, is where the story ends. The Alameda County Registrar of Voters has yet to implement Measure QQ, nor a similar measure, Y1, that passed in Berkeley in 2016.

“It’s so disappointing. As much as we tried to hold adults accountable, it didn’t happen. Even when they promised it would,” Rodriguez said. “And it’s not even our fault. No matter how much work we put into something, it doesn’t change anything. It makes me really mad.”

The situation in Oakland and Berkeley isn’t unique. Youth-led civic engagement initiatives typically struggle to maintain momentum, said Chuck Corra, associate director at Generation Citizen, which advocates for youth civics education. Students graduate and move on, priorities change, and — as any policy wonk will attest — the wheels of democracy can grind maddeningly slow.

“It can be frustrating. Sometimes municipalities drag their feet,” Corra said. “There’s all this grassroots activism and then nothing happens. … Young people are tired of seeing a lot of talk on issues that affect them. They want a seat at the table.”

In the case of youth voting initiatives in Berkeley and Oakland, the measures have stalled at the registrar’s office, where staff have hired a consultant and an attorney to work out the complexities of issuing ballots, in multiple languages, to a select group of voters for only one race, school board. The ballots and voting methods also must be accessible to people with disabilities.

The goal is to integrate the voting rolls, so students who vote in school board races and those who’ve pre-registered, which became legal in California in 2017, can seamlessly join the regular rolls once they turn 18, according to Cynthia Cornejo, deputy registrar in Alameda County.

“In a perfect world, this would be easy to implement. But we want to make sure we do it right,” Cornejo said. “I completely understand how frustrated people are. We all hoped this would be done sooner. … We’ve done a lot of work on this already, and it’s going well. We’re very close.”

California election law is unclear as to how long an agency can wait before implementing a voter-approved measure. But some delays related to Measures QQ and Y1 might be unique to Alameda County. Youth voting measures in Maryland and other states have passed and been implemented with little trouble.

Zo Pancoast, who was among the Berkeley students who pushed for Y1 six years ago, said the delay is disappointing, but it hasn’t deterred her and her peers from fighting for change. Now a student at Scripps College in Claremont, she’s remained active with Vote 16, a movement to lower the voting age, and is busy working on other political issues. Although she noted a “definite relaxation after the 2020 election,” young people are now launching new initiatives aimed at reproductive rights, affordable housing, mental health services in schools and other issues.

“People have this anger. They’re madder than I’ve seen them in a long time,” she said. “But there’s also hope. It feels like there’s a renewed momentum.”

One place of momentum is Culver City in Los Angeles County, where high school students have successfully campaigned to get a youth voting measure on the Nov. 8 ballot. If it passes, 16- and 17-year-olds will be able to vote for school board, city council and local measures.

Ada Meighan-Thiel, Ava Frans and Julia Rottenberg, students at Culver City High School, are among a group who’ve been organizing for years to bring the measure to voters. For them, the idea is not radical. After all, the national voting age was lowered to 18 only in 1971, through the 26th Amendment, and suffrage movements are as old as the country itself.

They also note that 16-year-olds can vote in numerous other countries, including Brazil, Scotland, Argentina and Austria.

And since young people work, pay taxes, drive and have a stake in their communities, they should have a right to vote, they said. Shutting them out of the electoral process is essentially taxation without representation, they said.

“Our voices do matter, and we have this opportunity to create substantive change,” Meighan-Thiel said. “Hopefully this leads to something meaningful.”

For Frans, the top issue for which she’d like to hold local leaders accountable is climate change and environmental sustainability. She wants to see schools in Culver City have plant-based, organic food and generate less food waste in the cafeterias; use more renewable energy, such as solar power; and use less plastic.

For Meighan-Thiel, the issue is affordable housing. As in many parts of California, housing is increasingly out of reach for young people in Culver City, and homelessness is an urgent concern. For Rottenberg, social justice and civil rights are the most pressing issues she’d like to see local officials address.

In Oakland, Rodriguez and her peers, who’ve been working closely with a local advocacy group called Oakland Kids First, are hopeful that the county registrar will eventually implement Measure QQ so some future cohort of 16-year-olds can finally have their say at the voting box.

“Why can’t we take these theoretical things we do in school, like debate and Model U.N., and apply them to tangible, real-world problems?” she said. “We’re not exempt from things that happen in our community. We should have a voice in the things that affect us.”

And meanwhile, they believe they’ve learned some important lessons about the powers and limitations of activism.

“It feels like we’re leaving a legacy,” said Holly Yu, a graduate of Oakland High who’s planning to attend UC Merced this fall. “Social justice and change are a marathon. They don’t happen overnight. They don’t even happen in a generation.”

Ixchel Arista, an incoming senior at Oakland High, said she’s comforted by the hope that her younger sister “and countless others” will benefit from Measure QQ. And she’s also grateful for the experience.

“For me, personally, my eyes were so closed to the potential that young people have,” she said. “I would get so mad about things, and say, ‘Oh my God, this is outrageous,’ but I didn’t realize that we have the power to make a difference. Knowing that now, that’s what keeps me going.”