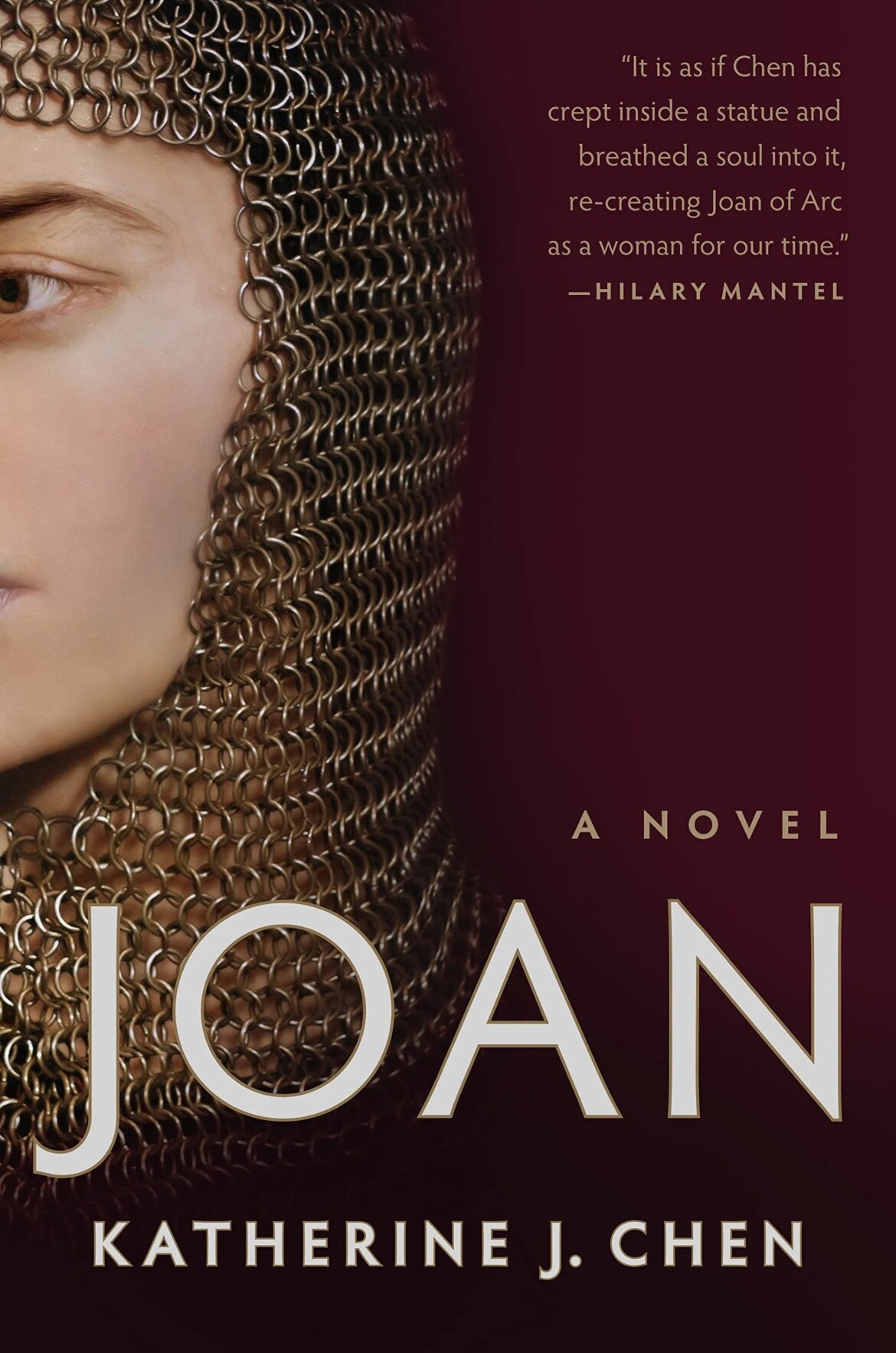 Doesn't this blurb by Hilary Mantel on Katherine J. Chen’s “Joan: A Novel of Joan of Arc" make you want to read the book? Why are blurbs called "blurbs" anyway? (Photo courtesy Random House)

I usually consider myself somewhat resistant, if not completely immune, to the persuasions of those ubiquitous blurbs — tidbits of flattery quoted from other authors designed to promote the sales of newly released books. They can be downright annoying. I had to flip through several pages of them, in fact, before landing on the title page of the last novel I read. (Madeline Miller’s “The Song of Achilles,” in case you’re curious, and I’ll commit a blurb here and highly recommend it!)

But they are not all created equal, I realized, when I encountered one recently that made me want to pick up a book I would otherwise have dismissed out of hand for lack of interest in the subject matter. Katherine J. Chen’s “Joan: A Novel of Joan of Arc,” just released by Random House, drew this finely sculpted and blessedly brief endorsement from Hilary Mantel: “It is as if Chen has crept inside a statue and breathed a soul into it — re-creating Joan of Arc as a woman for our time.” With that one sentence, Mantel swept away my aversion to reading about a voice-guided religious zealot from the distant past whose life experience probably held little or nothing to inform my own. Her thumbs-up is all the more compelling, as Mantel, twice a Booker Prize winner for the first two volumes of her “Wolf Hall” trilogy (completed with the subsequent “Bring Up the Bodies” and “The Mirror and the Light”), worked exactly the same miracle with the complex and fascinating character of Thomas Cromwell, the rags-to-riches right arm to King Henry VIII.

All of which set me to researching how such a potentially adept marketing tool came by the ungainly name of “blurb.” Turns out the term was coined in 1907 by a San Francisco artist, art critic, writer and humorist named Gelett Burgess, who cofounded a quirky little magazine called The Lark that regularly published his nonsense verse, sometimes under his pseudonyms. He also wrote a half-wacky, half-serious book called “Are You a Bromide?” (coining that term as well) and attributed its cover copy to a “Miss Belinda Blurb,” going on to define the new word as “a flamboyant advertisement; an inspired testimonial.” Find out more about Burgess, and the children’s book awards that bear his name, at http://www.gelettburgesscenter.com/.

We have a winner: Zyzzyva, San Francisco’s 37-year-old journal of the literary arts, has just emerged at the top of the list of the five winners of the 2022 Whiting Literary Magazine Prizes, the fifth such annual competition.

Named tongue in cheek by founder Howard Junker after the tiny weevil of the name that then occupied the last place in the Oxford English Dictionary, Zyzzyva publishes works of fiction, nonfiction, poetry and art by emerging and established writers from the West three times a year in a colorful format that is consistently beautiful. The prize entails a grant of $60,000, $20,000 of it immediate and the rest to be distributed in matching grants up to the same amount in 2023 and 2024.

The judges’ comments included these observations: “Masterfully edited and sharply cerebral, this place-based journal dazzles readers with formal innovation and an appetite for adventure, diving deeply into its regionality while ushering the world onto its pages. … Out of a rich history rooted in San Francisco, a stalwart, world-class magazine has emerged.” Find out more about the magazine, including how to subscribe, at https://www.zyzzyva.org/.

Author alert: Colson Whitehead fans, take note. The two-time Pulitzer winner (for “The Nickel Boys” and “The Underground Railroad,” the latter also a National Book Award winner) will be Zooming, apparently across the nation, in a live event co-sponsored by Berkeley’s Pegasus Books, Miami-based Books & Books and other indie bookstores at 5 p.m. Aug. 9. The Atlantic magazine’s Adam Serwer will be conversing with him on the very day his latest novel, “Harlem Shuffle” (Anchor, $17, 336 pages), is being released in paperback.

Set in New York in the early 1960s, it revolves around furniture dealer Ray Carney, who is introduced as “only slightly bent when it came to being crooked.” It’s being called both a hilarious crime caper and a morality play and a more serious meditation on race and power. But let’s tune in and see what Whitehead has to say about it. Tickets, $20.50-$26, include the book and taxes as well as access to the event. You can get them at https://www.pegasusbookstore.com/.

From the Library of Congress: Jesmyn Ward, author of the National Book Award-winning novels “Sing, Unburied, Sing” from 2017 and “Salvage the Bones” from 2011 and a professor of creative writing at Tulane University, has just been named the 2022 winner of the Library of Congress Prize for American Fiction. At 45, she becomes the youngest person to do so since the award was launched in 2008, joining the impressive company of predecessors E.L. Doctorow, Toni Morrison, Philip Roth and the Bay Area’s own Isabel Allende, among others. She will receive the award at the opening of the Library of Congress National Book Festival, returning to live presentations at the Walter E. Washington Convention Center in Washington, D.C., for the first time in three years for daylong events on Sept. 3.

This year’s festival, themed “Books Bring Us Together,” will draw more than 120 authors, poets and writers to 10 themed stages, including “History & Biography,” “Pop Lit,” “Science Fiction & Fantasy” and “Society & Culture.” Some of the biggest names include Geraldine Brooks, Mitch Albom, Karen Joy Fowler, Janelle Monáe, David Maraniss, Nick Offerman and Candice Millard. If you, like I, are reluctant to pop for a plane ticket to the free festival and risk your luggage’s disappearance into the maelstrom, there will be an option to livestream some of the events on that day, and all of the presentations will be made available as videos-on-demand shortly afterward. Find more information at https://www.loc.gov/.