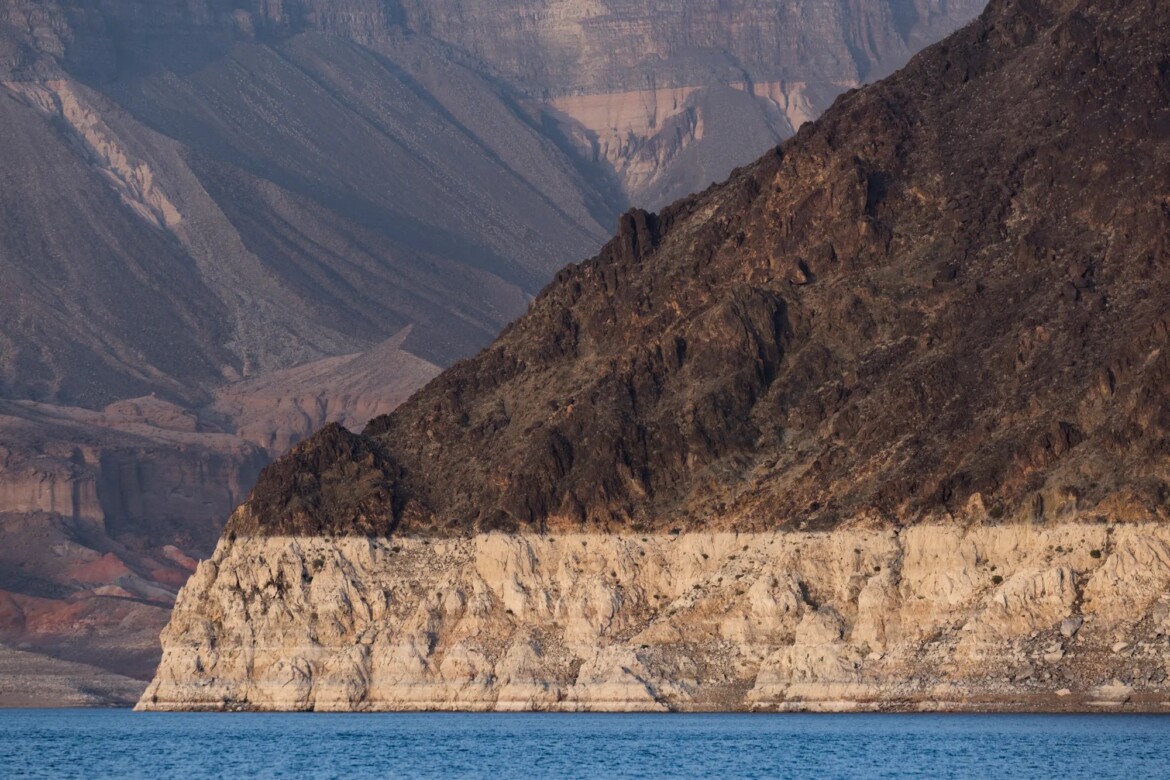 A thick white ring shows the dramatic decline of water levels at Lake Mead on the Colorado River on April 16, 2022. Photo by Caitlin Ochs, REUTERS

This story was updated on Aug. 16 with news announced by the US Bureau of Reclamation

Arizona and Nevada will face steeper cuts to Colorado River water in 2023 as drought continues to deepen, but California will once again be spared — at least for now.

The US Bureau of Reclamation today announced the first-ever Level 2a shortage condition for Lake Mead, the massive reservoir that supplies water to about 25 million people. That designation triggers more curtailments for Arizona, Nevada and Mexico, while California, which holds more senior rights, is not affected.

But there’s been no deal among the Colorado River basin states to further cut their water use by 2 to 4 million acre feet in 2023. It’s a massive amount — at least seven times more than Nevada is entitled to in a year.

In mid-June, Bureau Commissioner Camille Calimlim Touton gave the states a 60-day deadline to craft a deal, or face federally-mandated cuts instead.

As of today, no agreement had been struck. But the deadline has come and gone with no plan and no concrete consequences from the Bureau of Reclamation.

“To date, the states collectively have not identified and adopted specific actions of sufficient magnitude that would stabilize the system,” Touton said.

The verdict is especially high-stakes for Southern California, where the river provides a quarter or a third of the region’s water supply. Seven Southern California counties rely on the river for water and hydroelectric power, and 600,000 acres of farmland draw on it for irrigation.

“Our region, our economy, our way of life in Southern California depends on the Colorado River,” said Bill Hasencamp, Colorado River resources manager for the giant Metropolitan Water District, which supplies imported water to 19 million people. “It is vitally important.”

But climate change, drought and overallocation have been threatening the Colorado River’s supply for decades, even as the amount consumed and lost through reservoir evaporation regularly outpaces  its natural flows.

And now, with Lake Mead and Lake Powell at historically low levels, more needs to be done, Touton warned. “The system is approaching a tipping point. And without action, we cannot protect the system and the millions of Americans who rely on this critical resource,” Touton said today.

What exactly “more” means — and what that means for California — is still an open question. Here’s what to know:

The Colorado River and its tributaries cut through seven U.S. states and Mexico, from the river’s headwaters in Colorado and Wyoming to where it trickles toward — though rarely actually reaches — the Gulf of California.

A century of deals, acts and legal decisions have carved up 15 million acre-feet between Colorado, Wyoming, Utah and New Mexico in the Upper Basin, and California, Arizona and Nevada in the Lower Basin. Native American tribes hold rights to this water as well, and a 1944 treaty set aside another 1.5 million acre feet for Mexico.

The biggest straw, by far, is California’s. The state is entitled to 4.4 million acre-feet, or more than a third of the river’s natural flow. It’s enough water to supply more than 13 million Southern California households for a year. In the Lower Basin, Arizona comes in next with about 2.8 million acre feet.

Most of California’s Colorado River water is used for irrigation. The Imperial Irrigation District gets as much as 3.1 million acre feet a year, mostly supplied to nearly 475,000 acres of farmland and a handful of communities in the southeastern corner of California. Another major recipient is the Metropolitan Water District, which last year diverted roughly 1.1 million acre feet of water from the Colorado River system.

“(For) 81 years now, it’s been the backbone of our supply,” Metropolitan’s Hasencamp said. “Today, on average, about half of our imported water is from the Colorado River.”

In 2019, the Upper and Lower Basin states struck agreements laying out who gets cut in the event of water shortages. The Lower Basin’s Drought Contingency Plan, in place through 2026, allowed for cuts to California’s deliveries for the first time.

Arizona and Nevada, with more junior rights than the Golden State’s, start seeing cutbacks when water levels in Lake Mead drop to 1,090 feet; California’s cutbacks start when water levels hit between 1,040 and 1,045 feet. Lake Mead, the largest reservoir in the United States, is projected to drop to less than 1,040 feet by the close of 2022.

“California — by virtue of the legal structures — is in a relatively good position on paper,” said John Fleck, director of University of New Mexico’s Water Resources Program and author of two books about the Colorado River.

“But the problem is that ‘on paper’ is not the reality now.”

Drought has been parching the Colorado River basin for more than two decades. Even in years with close to normal levels of precipitation, less runoff is reaching the river — the result of increasing temperatures and drier soils drinking up the flows as climate change continues.

“We’re just not seeing the benefits that we used to that we once had to surface water, streamflow runoff and reservoir storage,” Christopher Harris, executive director of the Colorado River Board of California, said at a June meeting of the State Water Resources Control Board. “It’s definitely impacted the reservoir system significantly.”

Last summer, the U.S. Bureau of Reclamation called the first level-one shortage for the Lower Basin states, prompting cuts to Arizona, Nevada and Mexico — but not California.

At the end of July, levels in Lake Mead, according to NASA, “stand at their lowest since April 1937, when the reservoir was still being filled for the first time.”

Schettler laid out two strategies for conservation: The first, he said, is farms conserving more with use of efficient strategies such as drip irrigation. “That may take some money, and then it may take a little while to get that water.”

Another possibility is fallowing fields — paying farmers to leave fields dry. It’s a strategy that the Imperial Irrigation District has employed in the past, but it’s unpopular, Schettler said.

“Fallowing is like the F word around here,” he said.

The cuts could have ripple effects across the entire state’s water portfolio. Southern California’s other sources of imported water from the northern half of the state are low, too, after several years of drought.

“What do we do when both systems are stressed out? And how do we manage ourselves?” Harris asked at a state water board meeting in June.

For the region served by the Metropolitan Water District, which has characterized the negotiations as difficult, “every type of water user could be affected, including urban and agricultural uses,” according to a recent district board presentation.

The Metropolitan Water District has already implemented unprecedented watering restrictions for the 6 million Southern Californians who rely on the parched State Water Project, which funnels water from Northern California south and this year reduced deliveries to just 5% of requested supplies.

The district warned customers that receive Colorado River water that they could face restrictions as soon as next year.

California has seen federal cuts before — about 20 years ago, after water users failed to reach an agreement to cut back by 800,000 acre feet and stay within its 4.4 million acre-foot allocation.

“Importantly for the future of water agreements in the basin, despite predictions of doom, California absorbed the reductions with only modest impact,” reported Fleck and Anne Castle, a former assistant secretary for water and science at the U.S. Department of the Interior.

Eventually California water systems hashed out a deal. And now, Metropolitan’s Hasencamp said, it’s time to do so again.