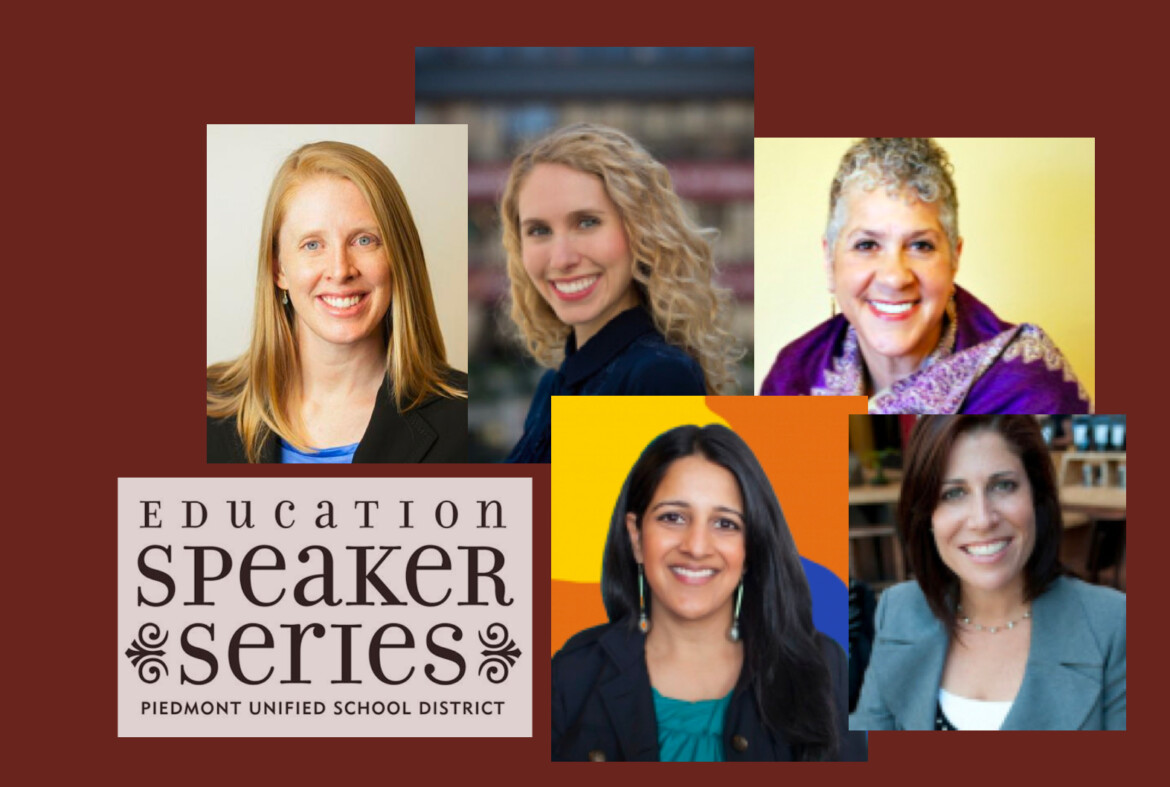 The Piedmont Education Foundation’s 2022-23 Education Speaker Series (ESS) vaults into the new season on Sept. 13 with a program of topics most relevant to local families, parents, students, and educators. Returning to in-person presentations held at either the Alan Harvey Theater or Ellen Driscoll Playhouse, the six-event series features experts speaking on issues such as gender equity and Title IX, relationships and the importance of community, understanding bias, dealing with anxiety, and matters related to money and philanthropy.

In a phone interview with the Exedra, PEF board member and chair of the ESS Dana Lung spoke of the highly interactive process for selecting topics and speakers. “We went through a community/parent-driven process with a committee.” To form the committee, she and PEF staff turned to the people who attended the most events in past seasons.

“We had about 15 people and had a brainstorming meeting around what would be relevant to parents. We came up with large topic areas and then asked for recommendations on speakers. We found out, through our research on each speaker that involved talking to experts, people in other communities, friends, and other resources, if the speakers were dynamic, research-oriented, and representative of the community. We looked to have a diverse lineup.”

During the last two years of the pandemic, Lung says the convenience of presenting the events in online Zoom sessions served its purpose. The series experienced strong attendance and feedback told them people appreciated programs that were helpful, provided resources and tools, were convenient—and comfortably fit into their lifestyles.

“Parents are busy, they work, they have to feed their kids dinner, and more,” says Lung. “It was nice to attend the series from the family room or the kitchen table and not have to take away from family time to go to an event.”

Now, however, Lung says many parents and the speakers have told PEF the live events are what they most want. Wanting to offer something for everyone, as some audience members still prefer online events, “we are trying to do a hybrid,” says Lung. The first event will be held live at the new Alan Harvey Theater, which Lung says is exciting, but also “a little stressful…as we are just starting to learn all the features of the new center; learning lights and sound and technology that is even new to the folks in the theater.”

The lineup for the season is ambitious and begins with Kim Turner’s “Pursuit of Equity: Why Title IX Matters.” Turner brings to the conversation a decade of experience as a nonprofit Title IX attorney who previously worked in the U.S. Senate and for the National League of Cities in Washington, D.C.

In addition to PEF, Lung serves on the Title IX Celebration committee that is active in the Piedmont community. The topic is especially relevant, she says “because it’s the 50th anniversary of Title IX and because the school district is starting an audit of their Title IX this year. We see there are big gaps and work that needs to be done.”

Next up after Turner is Kasley Killam, MPH, with “Social Health: The Transformative Power of Relationships.” As an expert in social health who is invested in the science of human interactions, Killam’s presentation is highly relevant, says Lung. “We’re not entirely done with the pandemic, and because the last years have been tough, people wanted someone to talk about the importance of community and connections.”

The fall 2022 sessions wrap up with educator and filmmaker Dr. Shakti Butler’s “Unconscious Bias Through Strategic Questioning: A Strategy for Building Equity Internally And Externally.” Butler’s highly participatory presentation will extend the PEF’s already established internal conversations about diversity, equity, and inclusion. The program will offer techniques for accepting or resolving differing points of view to achieve unified and transformative action.

In the new year, Renee Jain will appear with “Transforming Anxiety into Courage, Confidence, and Resilience,” and Rebecca Trobe, Psy.D, will expand upon topics related to philanthropy in “ How, When, and Why to Talk to Your Kids About Money and Giving.”

About Jain’s program, Lung says, “A lot of parents have been saying their kids have social anxiety. They are rejoining sports teams and clubs after two years away and they are experiencing the stress.”

Trobe’s contribution will facilitate what are often complicated conversations about money and giving. “We live in a community with resources and families want to give back. It’s hard to talk about wealth and power,” Lung says. “What does it mean to give back on a higher level? Parents have said they want to tell their kids the importance of giving. Rebecca Trobe will break that down so it’s not so intimidating and will help families to translate what matters most into how and when to give back.”

With the sixth speaker pending and close to being confirmed, Lung advises people visit the website for updates and information about purchasing series subscriptions.

Learn more HERE, or purchase tickets at the Piedmont Store at https://piedmontstore.org/ (choose a school site and click on the Education Speaker Series logo).