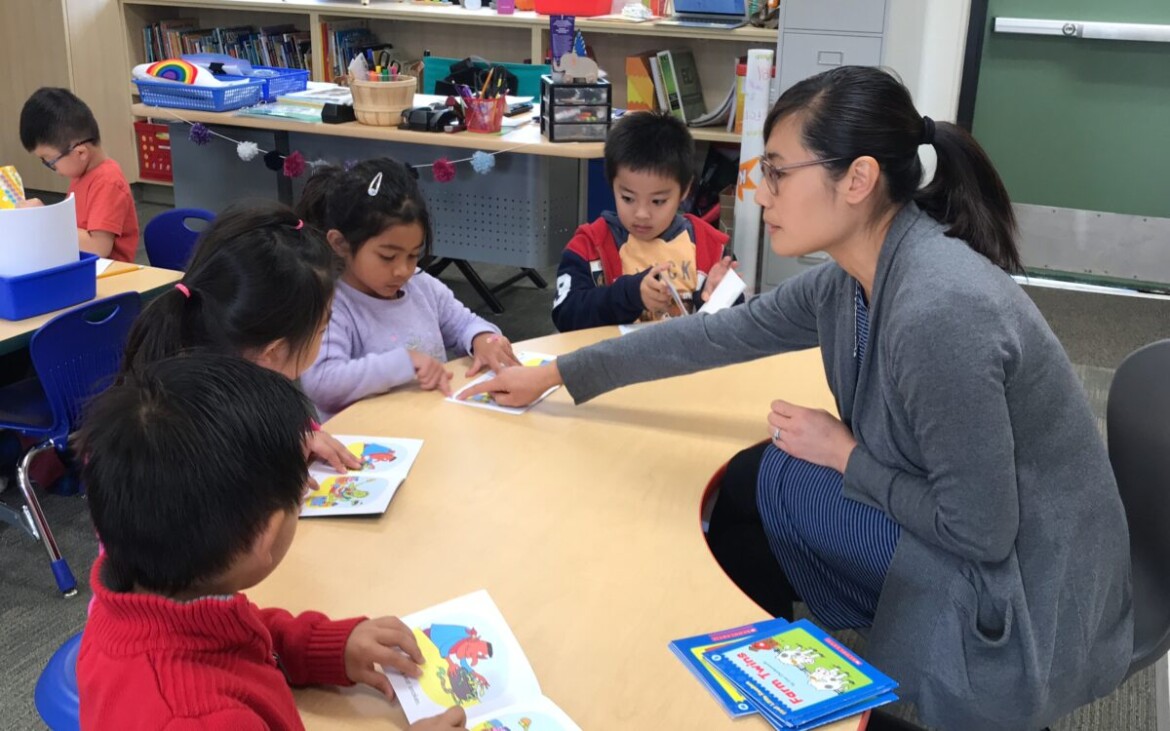 When 6-year-old Mia Truong started reading and writing in Vietnamese in addition to English, her parents knew they had made the right decision for kindergarten.

Mia’s family lives in San Jose, within the Mt. Pleasant Elementary School District. But her parents decided to send her to a different school district, Franklin-McKinley, so that she could attend a Vietnamese dual-immersion program.

“I’ve done my research. Especially us being Vietnamese parents, I wanted my daughter to learn Vietnamese,” said Mia’s father, Chuong Truong. “My daughter will have knowledge of two languages for the future. Just the creativity in her mind to think in both languages, it enhances her ability if she takes a trip to Vietnam and sees her second cousins, but also in English.”

Truong immigrated to the U.S. from Vietnam at age 5.

“I did not have this opportunity,” he said. “I wish I did. I can speak perfect English and almost perfect Vietnamese, but I can’t write in Vietnamese, for example. My daughter’s like, ‘Hey, how come you don’t know how to write?’”

Dual-language immersion programs, which teach all students in English and another language, are so much in demand that some school districts have been able to stop declining enrollment or even grow enrollment in a school by beginning a dual-language program. Research has shown that these programs are beneficial for both English learners and native English speakers.

Franklin-McKinley School District began its Vietnamese-English dual-immersion program in 2019 in response to requests from families who wanted Vietnamese to be offered in the district. Windmill Springs Elementary was chosen in part because it had lost close to a third of its enrollment between 2010-11 and 2018-19, going from 650 students to 440.

“The dual-language program was used as a strategy to grow enrollment on campus and not shut that school down,” said Taylor Nguyen, coordinator of state and federal projects for the district. “To stop the bleeding, the superintendent was like, ‘Let’s start with Vietnamese first because that’s what our families want.’”

“Because we were the only program offered in Northern California, we were able to recruit from any and every district whose parents were willing to drive,” Nguyen said.

The first year, the dual immersion program was only offered in kindergarten. The school is adding one class each year, as that first cohort of students moves on to a new grade. This fall, there are dual immersion-classes in kindergarten, first grade, second grade and third grade. Nguyen said the dual-immersion classes are full, and there is a wait list of children for the program. The overall student population initially grew but declined again during the pandemic.

Many other districts have also found that there is so much interest in dual-immersion programs that they have full classes and wait lists.

In Glendale Unified, in Los Angeles County, nine of the district’s 20 elementary schools offer dual-immersion programs, and 25% of the students enrolled in those programs live outside the district.

Enrollment at one school, Benjamin Franklin Elementary, was declining so much several years ago that Glendale Unified was considering shutting down the school. Instead, in 2008, the district converted the school to an “international foreign language academy magnet” and began offering dual-immersion programs in four languages — German, Italian, Spanish and French.

“It has completely reversed the enrollment trends at that school,” said Nancy Hong, director of dual-language immersion and magnet programs for Glendale Unified. “Not only did it save the school from closing, but the student population pretty much doubled since those programs came in.”

Cherrywood Elementary School in Berryessa Union School District, in San Jose, is another school that saw its enrollment increase after starting a dual-immersion program. Tina Tong Choy, the principal of Cherrywood, said enrollment had been declining at the school in the first two years after she arrived in 2016.

“Because our scores were probably in the bottom third of the district, there was no reason really to choose Cherrywood to be your school. In fact, we had people transferring out,” Tong Choy said.

Then Cherrywood started a Mandarin immersion program in fall 2018 after parents in the district lobbied for one. Since then, the school has increased enrollment every year. The school has two immersion classes in every grade level, and they fill up, Tong Choy said.

“We’ve had a waiting list since the time we’ve opened up,” she said.

Cherrywood Elementary has grown from 314 students in 2017-18 to 445 students in 2021-22. After next school year, however, the school will have expanded dual immersion to two classes in every grade, and will then be at capacity. The school also has classes in English only.

Dual-language immersion programs do face some enrollment challenges. It can be harder to fill spots after second grade because, by that time, all students must have some competence in the language other than English so they can understand the language at the same level as those who have been in the program since kindergarten.

In addition, when many neighboring school districts have dual immersion programs, they face more competition and may not attract students from outside the district. And while programs often grow enrollment at individual schools, they often can’t stop declining enrollment in a district as a whole.

Cherrywood Elementary still struggles to fill the classes that are in English only. Some parents of students in the Mandarin immersion program are organizing to try to attract more students to the English-only program as well, doing outreach to families at local preschools and other sites.

“We push out messaging that we’re building students’ global competence at our school,” said Tong Choy. “When you bring the two student communities together, it’s so much more powerful.”

For example, she said all students celebrate events like International Children’s Day or Lunar New Year together and participate in arts and crafts activities like painting, paper cutting, and lantern making. All the kindergarten teachers teach songs in English and Mandarin to all students, and they sing together in an end-of-the-year performance. Last year, the students all learned about Ruby Bridges and celebrated the Ruby Bridges Walk to School Day together.

Newark Unified School District started a Spanish-English dual-immersion program at Schilling Elementary School just last year, in 2021. Abbey Kerins, director of special projects for the district, said the school is not attracting students from outside the district because many neighboring districts already have Spanish immersion programs. However, she said the district does hope to open up more spots at other schools in the district that have waitlists by attracting students from those neighborhoods to Schilling.

Increasing enrollment is not the main reason the district started the program, however. Kerins said setting up the program was expensive because the district had to buy new curriculum materials and offer professional development for all teachers.

“There is obviously a benefit we’re getting from enrollment, but the cost of doing this for us is pretty high in exchange. The overall cost of the program doesn’t really honestly level out, in regards to enrollment,” Kerins said.

Still, Kerins believes it’s worth it.

“For us, it’s centering linguistically on the families that have been most under-represented in public education, which is our Spanish-speaking families,” Kerins said. “It’s about providing more equitable access and representation by creating linguistic diversity in our school’s instructional program.”