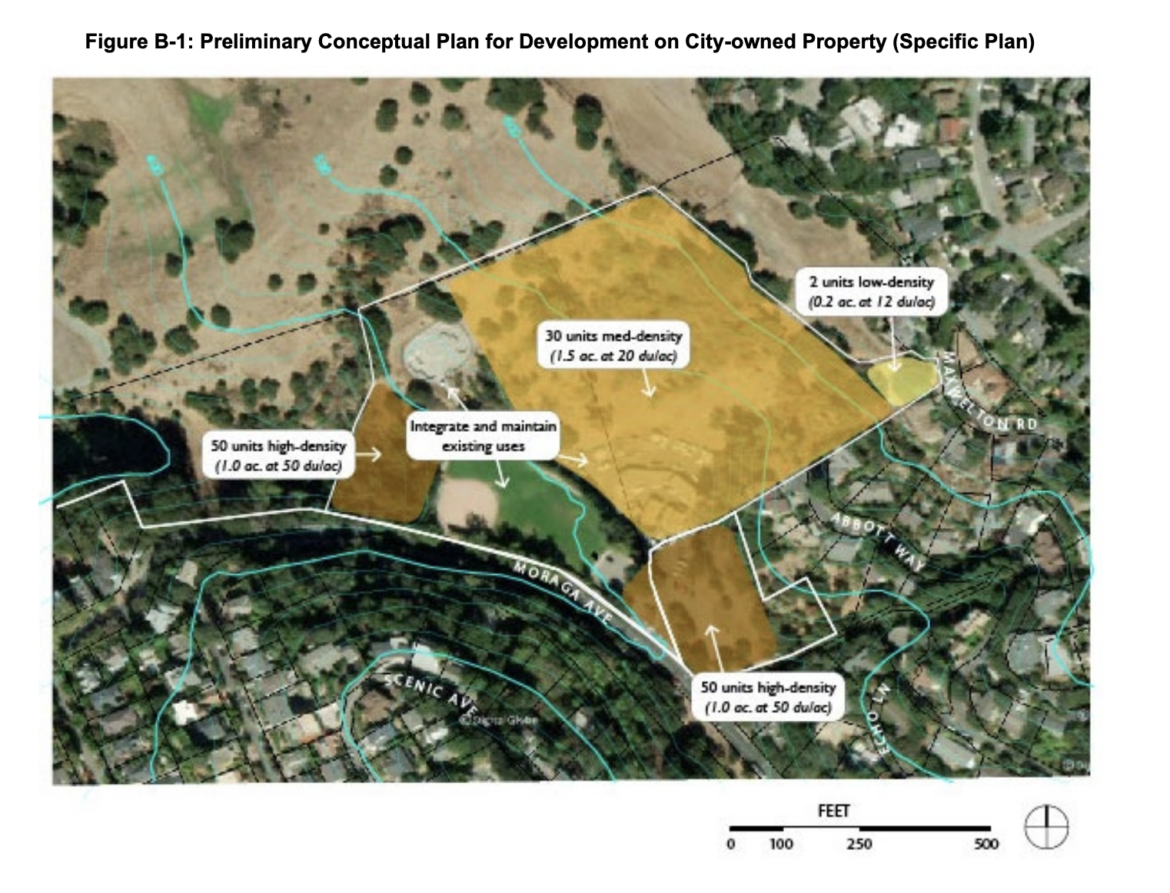 A screenshot from the Draft Housing Element outlining areas for potential new housing.

Acknowledging they may be pushing a March 2023 deadline to turn in a final Draft Sixth Cycle Housing Element document to the state, the City Council on Monday approved gathering yet more information about where to locate state-mandated housing, and how to best do it.

After more than five hours of staff reports, public comments, and council deliberation, the council Monday night directed city staff to expand the Moraga Canyon Specific Plan area to include all city-owned property along Moraga Avenue (including Blair Park) and start that work before the end of 2022; determine what’s required to relocate 74 proposed lower-income units from the Civic Center area to 1221 and 1337 Grand Ave. and 18 moderate-income units to parcels in zones C and D; do analysis on relocating above-moderate income units from 1221 and 1337 Grand Ave. as needed to keep density at or below 80 dwelling units per acre; and, within state Housing and Community Development Department guidance, maximize the accessory dwelling unit (ADU) count for all residential units.

The state requires Piedmont — along with every Bay Area city and county — to develop a plan to accommodate new housing units to add to the region’s housing stock. State law does not require cities to actually build or finance their allocation of new residences. Accommodating 587 residences, City Administrator Sara Lillevand said Monday, is “seemingly impossible” for a city as small and as built-out as Piedmont. And it has become increasingly clear that integrating new housing and city facilities can be a complex task — one for which the city is still seeking answers.

The council on June 20 had asked city staff to return with more detailed information about the feasibility of using Civic Center sites, and a high-level economic feasibility analysis for a housing plan that includes the Civic Center sites; issues concerning the city’s ability to regulate development on sites it owns; potential alternative sites for 40 lower-income and 13 moderate-income units should the city-owned properties at 120 Vista Ave. (City Hall) and 801 Magnolia Ave. (Piedmont Center for the Arts) not be used; possible alternate sites to the Highland Avenue grassy strip and the Corey Reich Tennis Center, which are no longer being considered as a location for 34 lower-income and five moderate-income housing units.

Most of those answers were delivered Monday night, with the help of an economic analysis consulting firm, Oakland-based Economic and Planning Systems. That firm’s analysis shows potential to develop affordable housing on the city-owned Civic Center property separate from city building improvements. Accommodating city facilities and housing in the same constrained spaces, however, would require significant study and parcel reconfigurations, according to a city staff report.

A number of California cities, including San Jose, South Pasadena, Del Mar and Norwalk, have either built or are considering building housing on their own city-owned parcels.

The draft Housing Element, as of Monday, called for 100 of the anticipated 257 lower-income units to be located in the Moraga Canyon specific plan area. Lillevand said the city should consider all city-owned land in the canyon for future plans, housing or other things, which would give the city more flexibility in planning.

More than 30 people addressed the council with comments ranging widely, from support for accommodating affordable housing in general to asking why some of Piedmont’s housing allocation couldn’t be shifted into Oakland. Several speakers asked why residents aren’t able to vote on these major decisions; others expressed disappointment with what they considered “NIMBY” attitudes about housing expansion, and said welcoming a wide variety of residents can only make the city a richer place to live.

Marcia Lane, a resident who lives on Bonita Ave. near the city center asked the council to avoid building in the Civic Center area, saying that between school traffic and parking constraints, the area could not handle more traffic or more construction noise. “I used to live in the recently developed housing on Piedmont Ave. That is why we moved to Piedmont. The noise of high density housing is unbearable. We moved to Piedmont specifically for a small town, quiet neighborhood.”

Resident Deborah Leland said the city needs to build new housing in every part of the city possible, and not eliminate any part of town — including the Civic Center area — from consideration. The city may have to overcome barriers to do that, including the threat of legal action from residents near the Civic Center. Leland and others encouraged council members to push through.

“Getting housing built is hard – that’s why we have a housing crisis,” she said.

The City Council has steadfastly maintained that the state housing mandate is a golden opportunity to make Piedmont a more welcoming place for more people.

A rumor council members tried to put to rest Monday night was the idea that the police and fire departments could be relocated from the Civic Center to land to somewhere in Moraga Canyon. Lillevand described the idea as a “bit of a non-starter,” and that police and fire should remain either where they are or near it. Lillevand addressed another rumor as well, saying developers have not approached Piedmont about developing city-owned sites.

City attorney Michelle Kenyon also addressed one of the larger legal questions that some residents have raised around the housing plan. She told the council that the city’s plan to increase density is not required to go to the people for a vote under a longstanding interpretation of the City Charter. “In order to require a vote, the change must be a change to the boundaries or changing one property from one zone to another,” she said. “It does not prohibit us from changing density within a zoning classification. The only time a vote is required is if the city chooses to amend the boundaries … or if it were to change a property from one zone to a different zone. That is not what we are doing here. Housing is a permitted use in all of our zones.”

Councilmember Betsy Andersen said the council did consider appealing the 587 number last year, but was advised against it. Andersen said that decision was a good one, noting that, with one exception, none of the 27 jurisdictions that appealed their numbers succeeded.

The city has to present its final plan, its “housing element,” to the state by May 2023, and must get a draft reviewed by the state much sooner than that. The analyses approved Monday figure to push that draft inspection back several weeks.

Cities that don’t have that plan in place by that date could be fined $10,000 a month as long as the housing element document is out of compliance, lose eligibility for some grants and loans, and lose the ability to issue building permits. Kenyon also said it would cost the city at minimum $250,000 — and likely much more — if the city chose to litigate rather than comply with the state mandates. That said, Kenyon noted that the city was aware of and monitoring ongoing lawsuits elsewhere in the state and if there was a viable way to join other cities that would benefit Piedmont in some way, she would bring it to the council for consideration.

A special City Council meeting is tentatively scheduled for Thursday, Aug. 18 from 6 to 10 p.m. at City Hall for more discussion on the Draft Housing Element.

The Draft Housing Element itself, as well as all agenda materials, presentation, minutes and the meeting recording for June 20, can be found at https://www.piedmontishome.org/event/citycouncil-meeting-1 and the city’s website at https://piedmont.ca.gov