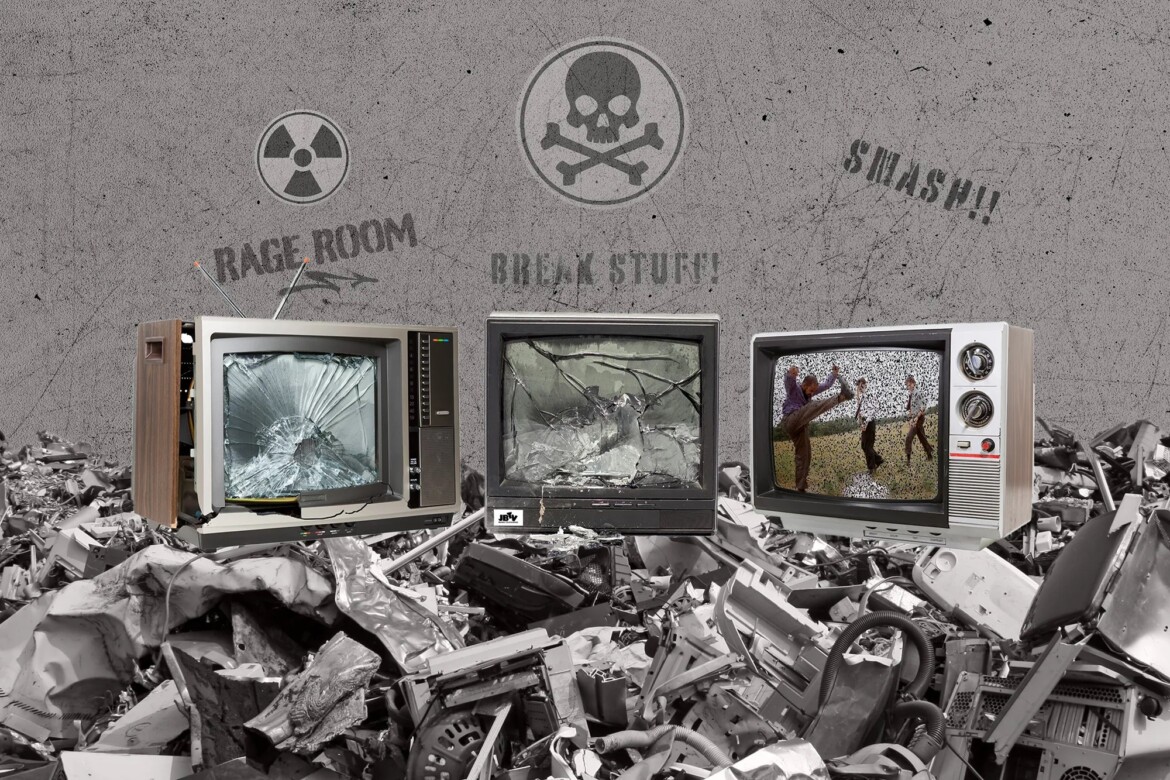 If you’re a fan of local TV news, there’s a good chance you’ve seen a segment about so-called “rage rooms.” These are businesses – often in strip mall storefronts or office parks – where people pay to don a pair of safety glasses, grab a baseball bat and smash the heck out of things like old dishes, cabinets and fax machines.

There’s no shortage of fun features showing some affable news figure putting on coveralls and whacking glassware and old phones, often in a plywood-walled room adorned with funky graffiti. It’s de-stressing through destruction.

While the businesses have been growing in popularity, some California environmental officials say they are worried that operators often don’t know about safety regulations and could be releasing hazardous waste into the environment. One high-ranking state environmental regulator says her department is too thinly staffed to do anything about it.

“It’s like that nightmare that’s just out of my reach. Like, I know it’s a huge problem,” said Rita Hypnarowski, a senior environmental scientist and e-waste team leader in the state’s Department of Toxic Substances Control.

“Fundamentally, there’s nothing wrong with smashing some plates in a room for stress release. But the problem comes in when they’re breaking things like e-waste, which can seriously harm people’s health.”

Electronic waste includes things like old televisions, flat screen monitors and laptops. Some of that waste has leaded glass while others are lined with rows of mercury tubes, Hypnarowski said. Those items are supposed to be recycled at facilities that use special equipment to separate the hazardous elements. When people smash e-waste, the rooms can fill with a fine dust of toxic metals, Hypnarowski said.

“You’re getting exposed to flying airborne particles and you don’t even know you’re being exposed,” she added.

Hypnarowski said her department became aware of the issue around 2018. In 2019, they inspected a business in the Capital region, Smash Sacramento, state inspection records show.

Inspectors found old computers and other electronics, according to inspection records. The owner told the state he got the material from e-waste companies but refused to say which ones, the records show.

Inspectors scanned debris on site in April 2019 and found elevated levels of lead, zinc and cobalt, according to a statement of facts in the case. The department cited the company at that time for two alleged violations of the state’s hazardous waste control laws, which are supposed to protect the environment from improper waste disposal.

The agency didn’t conduct air sampling, so it’s unclear the degree to which the release of the heavy metals was a health risk to customers or employees. The inspector did indicate, however, that it was a concern, documents show.

“I informed him that I was seriously concerned about the health and well-being of not only Smash’s customers but of (the owner) as well,” the investigator wrote in a statement of facts regarding the case.

That case is still open and the owner did not respond to interview requests.

California has at least 14 rage rooms operating in the state, according to a list provided by Hypnarowski.

The danger to the environment and to customers from such businesses is likely minimal – especially compared to larger issues the Department of Toxic Substances Control regulates, said Antonio F. Machado, professor of environmental and occupational health at California State University, Northridge. The amount of toxic material rage rooms generate is probably small, and good ventilation could alleviate much of the concern for patrons, he said.

“To me the largest health concern potentially would be workers in the facility who are exposed daily,” Machado said.

The names of the 14 rage rooms aren’t listed in a database of sites the California Division of Occupational Safety and Health (Cal/OSHA) has inspected.

Some of the businesses explicitly state on their websites that they don’t allow patrons to smash certain toxic items.

One rage room in Southern California says that outside items “must be reviewed by our staff prior to entering the rage room for safety. Items such as fluorescent lightbulbs, batteries, power tools and CRT TVs…are not allowed due to hazardous materials found inside of them.”

Hypnarowski acknowledged not all electronics pose a health risk. For example, computer towers pose a minimal danger as compared to monitors. But that’s why inspections are so important, she said.

The 2019 Sacramento inspection was both the first and last inspection the Department of Toxic Substances Control conducted of a rage room, Hypnarowski said.

The department has struggled to hire and retain scientists, making it difficult to keep up with inspections, said David Rist, a senior environmental scientist who’s been with the department for more than 30 years.

“We have lost inspectors in a variety of programs,” Rist said. “They come for the mission but leave because there are other opportunities and (they) don’t like being undervalued.”

Scientists like Hypnarowski and Rist are talking about shortcomings in their departments’ oversight as their union – the California Association of Professional Scientists – is currently in labor negotiations with the state. The starting salary for an environmental scientist is around $50,000 to $62,000 a year. A union spokesman said higher pay would help the state keep talented young scientists in departments like Toxic Substances Control and allow for better regulatory oversight.

“The state needs to pay equitably so we can pay to fill these positions to protect the people of California,” said Bianca Gutierrez Petzold, staff director at the California Association of Professional Scientists.

Without the state, oversight of rage rooms could fall to local regulators, as has happened in Los Angeles.

The department declined to provide a copy of that citation or provide details because the case is open, and the business can still attempt to defend itself against the alleged violations.

“It’s a concern to ensure that hazardous waste is not being illegally disposed of and also that the individuals in these so-called rage rooms are not being exposed to hazardous constituents,” according to the department’s statement.

A Riverside County environmental official said his office is aware of rage rooms but didn’t know there were any in that county until CalMatters reached out.

The county will contact the businesses to see if they’re allowing people to smash e-waste on site and, if so, to educate owners on the various regulations, said Nicholas Crain, program chief in the county environmental health department’s hazardous materials management branch.

An education campaign is often enough to make sure businesses know of and follow health and safety regulations, he said. But it’s a lot of work.