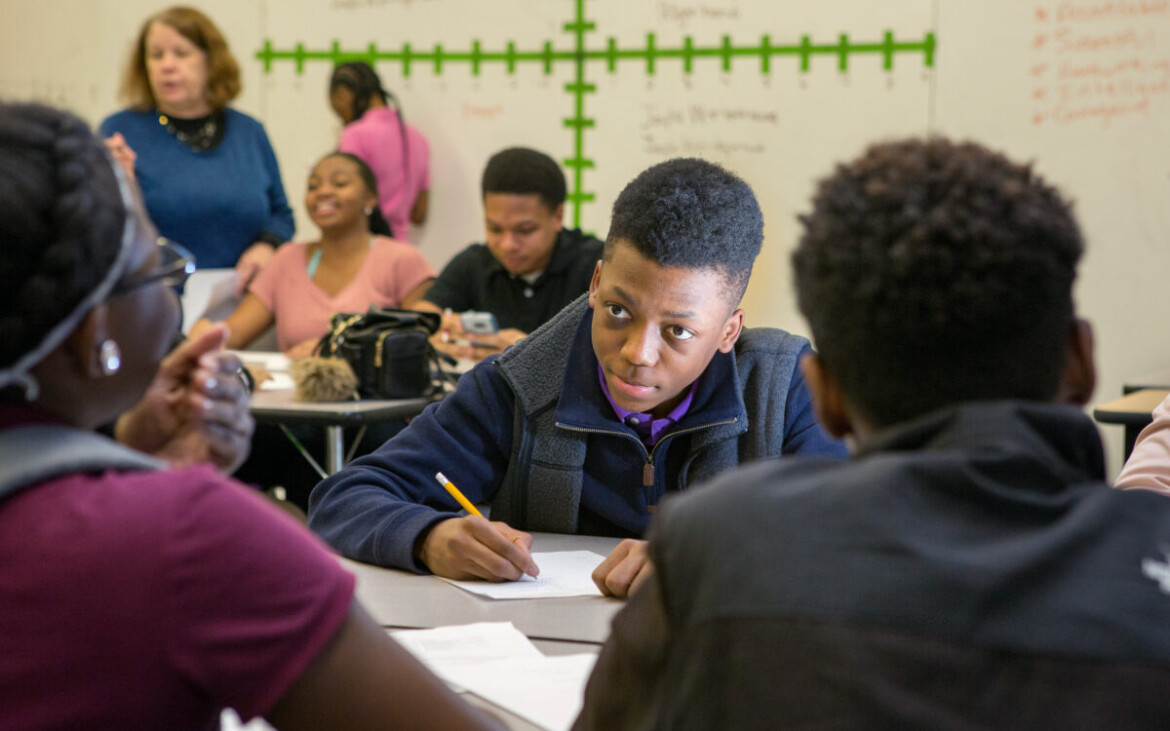 The debate that continues to simmer over California’s new math guidelines is a reminder that divisions remain deep over approaches to instruction, the pacing of algebra in middle school and the offerings at high school, particularly for students interested in STEM in college.

The State Board of Education has pushed back the adoption of the California Math Framework to sometime in 2023, an indication that it is taking seriously hundreds of suggested changes and critiques and that potentially extensive changes may be coming.

At the heart of the issue is a disagreement over how best to motivate and raise the math success of underperforming students, including Black students, Latino students and English learners.

Similar to frameworks in English language arts and science, the math framework is intended to offer guidance on translating state standards — the Common Core — to the classroom. A framework is not a mandate; districts can pick or reject whatever suggested lessons, tactics or strategies work for them.

But it is important, not only to publishers, who will base textbooks on it, but also for teachers, superintendents and education advocates.

California students lag behind the nation in math, scoring in the bottom fourth of states in fourth grade and bottom third in eighth grade in the National Assessment of Educational Progress.

Only 34% of students overall, 18% of African American students and 20% of Latino students met or exceeded standards on the state’s 2019 Smarter Balanced standardized test in math, the last time that all students took it until this past spring. Those results aren’t out yet.

Teachers haven’t had a framework since 2013, and that one was done after the adoption of Common Core; its purpose was to explain and prioritize the standards. Teachers have been eager for guidance on how to make math more engaging, fun and relevant to students and expressed that in focus groups, said Ma Bernadette Andres-Salgarino, assistant director for integrated STEM development at the Santa Clara County Office of Education and president-elect of the California Mathematics Council.

“They wanted a focus on habits of mind, and a huge component of that is to ensure we have equitable participation from people of color,” she said. “Teaching mathematics through an equity lens was overwhelmingly shared by educators and students.”

In the introductory chapter, the framework explicitly says it is designed to respond to structural barriers that impede math success: “Equity influences all aspects of this document.”

Despite criticism, the framework continues to resonate with classroom teachers who participated in the framework process and with advocacy groups for low-income children. “We believe that the guidance in this Framework, if effectively implemented, has the potential to transform mathematics instruction to ensure that all students have equitable access to rigorous and relevant coursework,” said a letter from two dozen organizations, including Children Now, the California Mathematics Project and Californians Together, that advocate for English learners.

Critics, unmollified by changes so far, continue to argue that the framework pushes social justice over rigor — a charge the drafters of the document deny — and that its policies, if implemented, will ultimately set back many of the students it’s intended to help.

“We fully agree that mathematics education should not be a gatekeeper but a launchpad,” said a letter signed by more than 1,700 science, technology, engineering and math educators or professionals from California and elsewhere. “However, we are deeply concerned about the unintended consequences of recent well-intentioned approaches to reform mathematics education, particularly the California Mathematics Framework.”

The framework stated that a different approach is needed because traditional math instruction turned off many students by stressing rote memorization of “meaningless formulas” and procedures; along with being boring, it was disconnected from students’ lives and experiences.

Instead, math should build positive math mindsets among all students, but especially for students of color who have become convinced they’re not capable of doing well. Teachers should stress problem-solving and inquiry, the framework said.

“Mathematics learning, understanding, and enjoyment comes when students are actively engaged with mathematical concepts — when they are developing mathematical curiosity, asking their own questions, reasoning with others and encountering mathematical ideas in multi-dimensional ways,” according to the framework.

Departing from a traditional approach, the framework discourages lessons based on individual Common Core standards, including the priority standards identified in the first framework. Instead, teachers should create more complex tasks around “big ideas” that involve clusters of standards and make connections across grades between concepts like number sense and probability to give students a bigger picture.

“The value of focusing on big ideas for teachers, and their students, cannot be overstated,” the framework said.

Writers of the framework and proponents like Andres-Salgarino acknowledge the framework will require teachers to teach differently. “Creating such classroom experiences is not easy,” the framework said.  Extensive training will be needed, she said.

Kyndall Brown, executive director of the California Mathematics Project Statewide Office, which is affiliated with the University of California, and a proponent of the framework, agrees. Teaching a conceptual understanding of math will require discussion and take more class time at the beginning of the year, as teachers “are trying to retrain students to problem-solve on their own,” he said. “But once they get used to that way of thinking, then you actually get through more of the curriculum. It’s like going slow to go fast.”

Katherine Stevenson, a math professor at California State University, Northridge, who has worked with teachers in Los Angeles Unified, said, “It’s very hard for teachers not to get lost in skills and practices that are very concrete, so I applaud the big ideas.” But, she said, preparing lesson plans and classroom tasks will require an intense amount of preparation and continuous training.

“If you look at the framework as an aspirational document, I am OK with it, but I have real concerns as an actionable document.”

Brian Lindaman, faculty co-director of the Center for Science and Mathematics Instruction at California State University, Chico, chaired the five-person committee that drafted the framework, but the writer most identified with the framework and whose prolific writing is most often referenced in it is Jo Boaler. Boaler is a professor of mathematics education at the Stanford Graduate School of Education.

The most prolific and one of the strongest critics of the framework is a colleague at Stanford, Brian Conrad, a professor of mathematics and director of undergraduate studies in math. Conrad said he agrees that math is often poorly taught and needs to be improved. But he faults the framework’s solutions as simplistic, oversold and not grounded in research.

Conrad said he spent spring break reading not only the framework but also many of the sources in footnotes on which the authors justified their recommendations. “To my astonishment, in essentially all cases, the papers were seriously misrepresented” and in some cases “even had conclusions opposite to what was said” in the framework. The misrepresentations of the neuroscience of math comprehension, de-tracking in favor of heterogeneous student grouping, the use of assessments and acceleration call into question the recommendations. Writers, he said, “should not be citing papers they do not understand to justify their public policy recommendations” fitting their perspectives.

The first version had called for districts to discourage students from accelerating to take Algebra I in middle school; a more equitable approach, it indicated, would be to require all students to take the course in ninth grade. That, however, would force students to take extra courses, summer school or compressed courses to get to calculus by senior year. After a big pushback from the STEM community and parents of high-achieving students, Conrad said, the writers have left it to others to recommend how courses could be consolidated to accommodate students forced to squeeze in extra math.

The chapters on high school math provoked the most comments, anger and division; it is also an area with the potential, with more work and needed clarity, for a resolution, said Stevenson.

For too long, the pathway to calculus for a competitive college has been the only option, proponents argued. “It doesn’t matter if you’re going to be a theater, journalism or arts major, students feel pressure to put it on their transcript,” said Brown.

And yet, he said calculus isn’t offered in many high-poverty schools, and in schools that do offer it, “they put so many barriers in place that the many students of color who attend those schools never get access to it.”

Seeing no relevance to their lives from calculus and no other options besides AP statistics, many students take no math in their senior year, which is a lost opportunity, Brown said.

The framework encourages alternative senior year courses, such as modeling or quantitative reasoning, which CSU campuses designed with state funding. It suggests a third pathway in addition to traditional and integrated math, called Mathematics: Investigating and Connecting, although it is vague on details. And it includes a lengthy chapter on data science in K-12, including design principles for a high school course.

“I like the emphasis on data science. It’s important for students to have a really good understanding of data, and it is a viable career field,” Brown said.

STEM professors and professionals say that Black and Latino students are already under-represented in quantitative majors; the framework, by proposing alternative pathways and data courses that avoid Algebra II and courses preparing students for calculus, would make that worse.

“Students who take a data science course as an alternative to Algebra II in high school will be substantially underprepared for any STEM major in college, including data science, computer science, statistics, and engineering. Such students will need remedial math classes in college before they can even begin such majors, putting them at a considerable disadvantage,” stated a letter signed by more than 400 academic staff at California universities.

Conrad said that the framework conflates data literacy, an essential skill that can be taught in many courses, and data science, which requires advanced math as a career pursuit. And he objects to a “bias” toward data science in the framework with language that implies that it offers a more interesting and equitable career. All fields of math can be taught well or badly,” Conrad wrote. “All educators should object to the notion that students of color or girls cannot excel in mathematical fields other than data science.”

“If you start saying to K-12 kids ‘You are in the data science track’ but when they get to UC they cannot make that jump, you are creating a second-class pathway and have actually created what you are trying to eliminate; you just gave it a different name.”

Conrad and others urge the state board to eliminate the proposed Mathematics: Investigating and Connecting high school pathway and to rewrite the data science chapter from scratch by a group of “disinterested content experts” from industry and colleges along with high school teachers.

Stevenson suggested that creatively redesigning some math courses could offer a middle ground that leads to post-graduation options, not dead-ends.  Examples could be a three-year integrated pathway that blends statistics or a two-year course in statistics after the first two years of high school math that combines Algebra II.

“There could be consensus around that,” she said.

Freed from a looming deadline, the state board and the California Department of Education have the time to look at these and other alternatives that could temper the debate and do right for students.