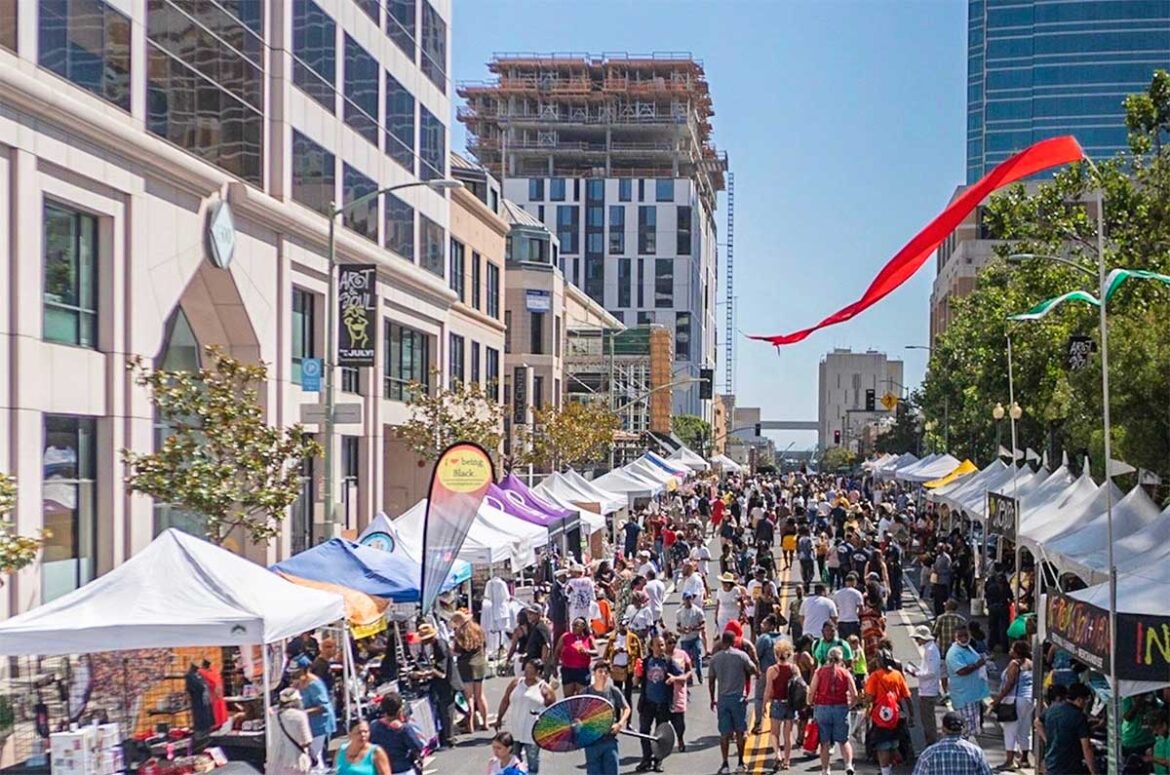 Crowds take in the craft and food booths lining the downtown during a recent Art + Soul Oakland festival. The event celebrates its 20th anniversary on July 23, 2022, with free admission as it returns from a two-year hiatus. (Photo courtesy of Art + Soul Oakland/Facebook)

You can knock back jambalaya, twirl (or stumble) on a roller-skating rink, groove to the legendary Faye Carol and shake what your mama gave you at Oakland’s Art + Soul festival this Saturday — and for free, no less.

It’s the 20th anniversary of the event, recognized as one of the region’s top music festivals, returning after a two-year hiatus caused by COVID-19. Held in the heart of Oakland at Frank H. Ogawa Plaza, the return of this quintessentially Oakland event is symbolic of the burgeoning recovery from the pandemic.

Organizers are “beyond thrilled” to be back in downtown Oakland, according to Samee Roberts, executive producer of Art + Soul. “The community has signaled that it can’t wait for the event,” Roberts said — no surprise given that the festival has drawn as many as 30,000 people in the past.

This year’s July 23 event is one day only, encompassing five blocks around 14th and Broadway and running from noon to 6 p.m. Unlike past festivals, admission is free.

“It’s free in celebration of our twentieth anniversary. We always wanted it to be free, but it didn’t pencil out,” Roberts said. “It still doesn’t really pencil out, but we’re doing it anyway.”

Faye Carol will premiere her musical suite, “Blues, Baroque and Bars: From the Streets to the Symphony,” at Art + Soul, accompanied by musicians including former Parliament-Funkadelic drummer Dennis Chambers and Oakland-based MC Ryan Nicole bringing the bars.

“The work is a tribute. It traces the history of Black people in America through music. It’s about how blues music has prompted other musical genres to develop — everything from roots to hip-hop,” Roberts said.

Oakland native and classically trained pianist Kev Choice, rapper/singer/songwriter Jonah Melvon and three-time Grammy nominees the Alphabet Rockers are some of the other musicians in the lengthy lineup of performers.

Also, folks attending the event can enjoy (or embarrass) themselves at a skating rink, consume all sorts of interesting comestibles and purchase art, jewelry, clothing and other items at the festival’s artisan booths.