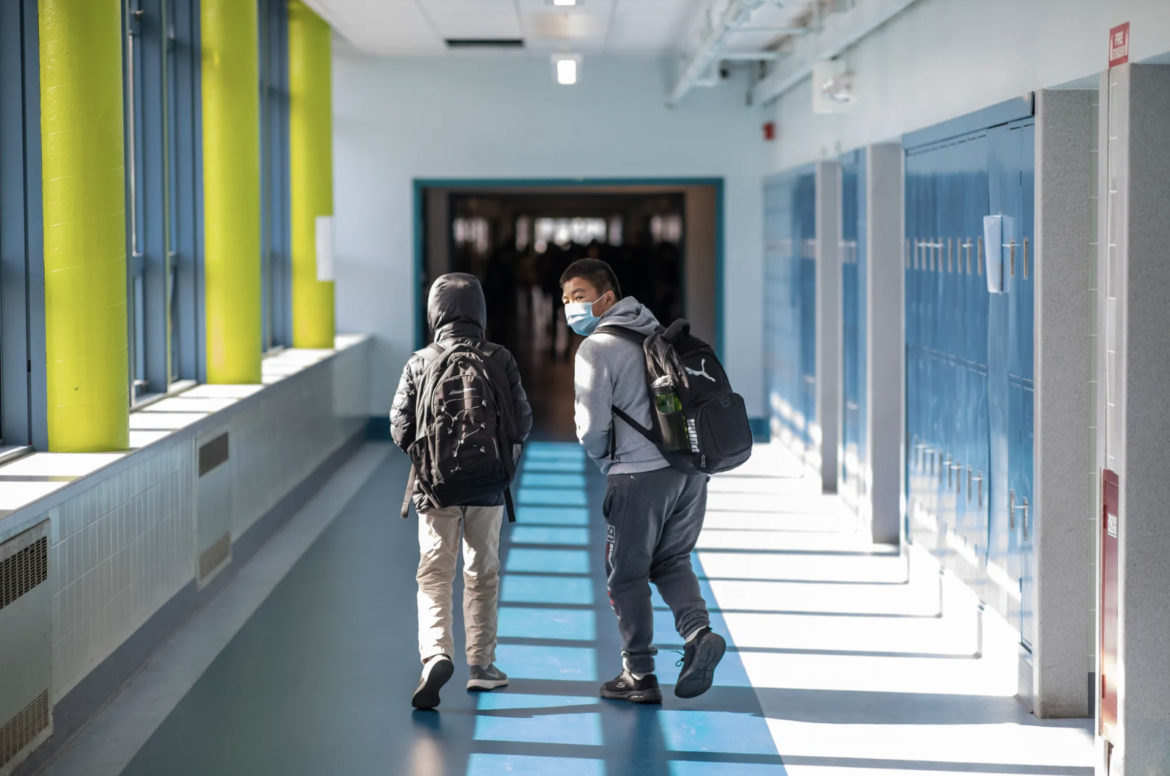 Students are back in classes on April 22, 2022, at San Francisco Unified's AP Gianni Middle School. The district, which got more than $186 million in federal pandemic funds, refused a request from CalMatters for records showing how it has spent the money so far. Photo by Martin do Nascimento, CalMatters

In the past two years, state and federal lawmakers passed an array of measures that allocated $33.5 billion in one-time funds to California’s K-12 schools to address the pandemic’s impacts. With no central accounting for that unprecedented infusion of cash, CalMatters spent three months examining stimulus spending at select school districts.

Oakland Unified and San Francisco Unified both refused to provide spending records to CalMatters. Four other districts, including Los Angeles Unified, haven’t said no — they just haven’t provided any records more than two months after being asked.

Some district officials complain about an overwhelming amount of reporting requirements: quarterly expenditure reports to the state, spending plans for certain funds, special federal audits for districts that receive larger amounts of money.

Even so, the specific vendors receiving massive paydays and the actual items districts are purchasing are often a mystery, education advocates and some parents said.

To begin to understand where the money is actually going, CalMatters submitted public records requests in March to more than 30 California public school districts – including the 20 biggest and 10 random districts that represent the geographic and demographic diversity of the state. We also asked for records from a chain of nine virtual charter schools.

Documents showing how governments spend taxpayer money are among the most basic available under the California Public Records Act. Agencies are supposed to respond to requests within 10 days, although they can delay actual production if they need additional time to compile the records. If they deny a record, the requester can sue.

Others proved more difficult. Several districts initially pointed to generic reports with lump sum categories of spending posted online. Another provided a PDF in which the names of vendors were illegible. After being reminded of their obligation under the state’s public records act and notified that other districts had readily complied, most relented.

“Nothing’s more basic to transparency than accounting for how public agencies spend money,” said David Loy, the nonprofit First Amendment Coalition’s legal director. “You’re spending the public’s money. You should be accounting for how you’re doing it.”

The biggest district in the state — Los Angeles Unified — acknowledged CalMatters’ March 14 request but had not provided any records as of this week. Three other districts — Stockton Unified, Elk Grove Unified in Sacramento County and Klamath-Trinity Joint Unified in Humboldt County — also have yet to provide the records months after they were requested. Stockton and Elk Grove are among the state’s 20 largest.

The California Virtual Academies, nine charter schools closely tied to a publicly traded corporation, provided spending records for last fiscal year only. But the schools refused to provide any records for this fiscal year. Francis Burke, the schools’ business official, told CalMatters in an email that the accounting for various expenditures can change over the course of a year. The schools won’t release additional records until later this year, Burke wrote.

Oakland Unified, which refused multiple times to provide any detailed spending records, had been in trouble before on its stimulus spending. According to state records, the district misspent stimulus funds last fiscal year and had to reimburse $1 million from other accounts.

“Unfortunately, The District is unable to locate any document responsive to your request,” Geri Baskind, a district legal assistant, wrote in response to CalMatters’ March 3 request for records.

“The District does not use an accounting system that would allow us to extract the transactional level information requested,” according to a letter from the district.

“It certainly strikes me as odd, to say the least, to say that any major urban school district cannot produce transaction level data about who it’s giving money to,” Loy said. “That should be accounting 101.”

The district was forced to turn over such spending records to the state earlier this year. San Francisco Unified was one of the 50 local education agencies the state picked for a review of stimulus spending this fiscal year.

The state issued a so-called “notification of findings” in April, listing seven red flags that included millions of dollars in questioned expenditures.

Others also have struggled to get information from the district. Some San Francisco parents say they feel school leaders aren’t providing them with enough information about spending.

“As a leader of a parent group that is focused on our public schools, I feel like I’m a fairly plugged-in person. Yet when it comes to the federal money, I feel like there has not been much transparency,” said Meredith Dodson, the San Francisco Parent Coalition’s executive director. “We attend every board meeting, and I don’t remember them asking any parent groups for input. I could’ve missed it.”

Dodson said she read about one district that hired literacy coaches using the stimulus money.

“I think folks just feel disheartened when you see a story about a district using these funds in such a great way. And with ours we don’t even know where the money went,” she said.

“That can only happen if the community members – the teachers, the parents, the students – can know where the money is going,” Leung said.

Read part one of this CalMatters investigation into school district spending of pandemic funds HERE.