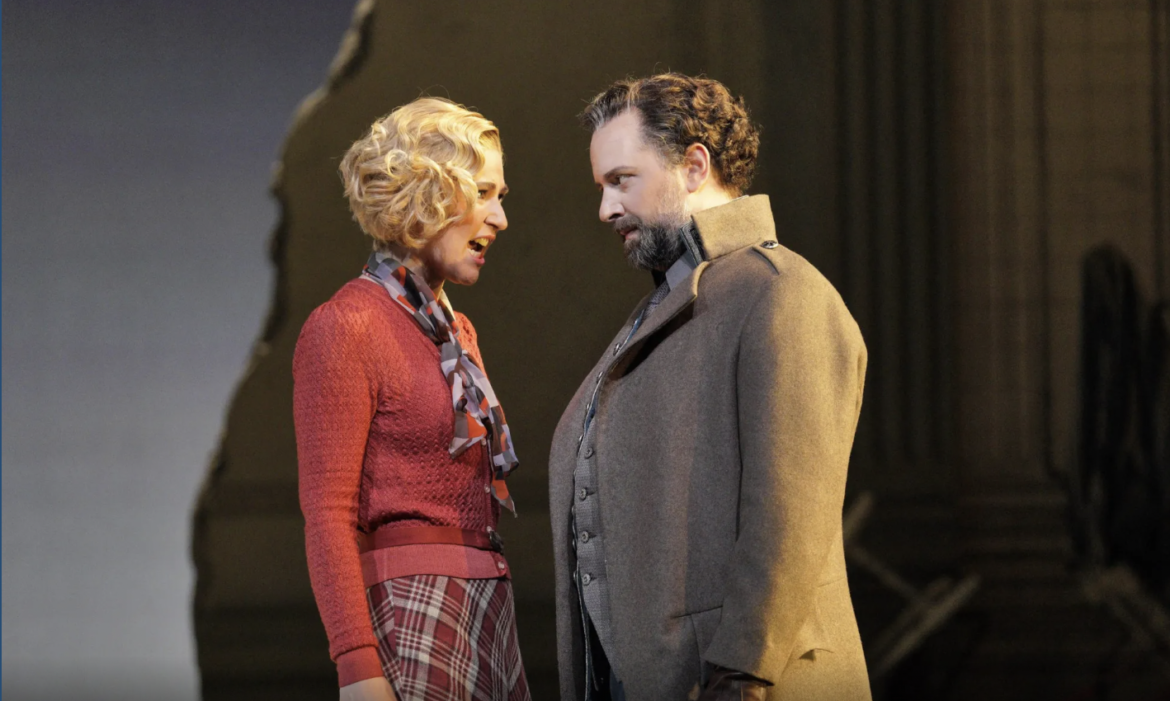 Under the direction of Michael Cavanagh, Mozart’s opera returned to the War Memorial Opera House Saturday night in a dramatic staging that mines the darkness at the center of one of the composer’s most enduring works — and suggests the ways that one man’s despicable deeds can corrupt an entire society.

The third in the company’s multiyear Mozart trilogy that began with “The Marriage of Figaro” in 2019 and continued with “Cosi fan tutte” in 2021, “Don Giovanni,” like those earlier productions, is set in and around a great manor house. (All three productions were conceived by Cavanagh and designed by Erhard Rom.)

But where the “Figaro” house was an 18th century model of stately elegance, and “Cosi” was situated in a 1930s seaside resort, Saturday’s opening unfolded on a crumbling ruin about to go up in flames (lighting by Jane Cox) — a place, a few anguished aristocrats aside, that’s peopled by a ragged troupe of townspeople in a mix-and-match array of rustic grubbies and steampunk garb (Constance Hoffman designed the costumes).

Only the title character appears to be prospering: With his manservant, Leporello, on hand to assist with the particulars, the Don is free to pursue his insatiable quest to seduce every woman he meets.

As Act I begins, the wreckage he’s already left in his wake — and the production’s allusions to modern-day sexual predators — are everywhere. The Don has just assaulted Donna Anna, and then killed her father, the Commendatore, who attempted to come to her rescue.

If, three hours later, Cavanagh’s core concept for this “Don Giovanni” never quite justifies its dystopian setting — or forges a discernible connective link to the trilogy’s earlier productions — the director’s staging still achieves considerable dramatic impact as the title character’s aggrieved victims express their anguish in scene after scene highlighting some of Mozart’s greatest set pieces.

The company fielded a strong cast for the production — one that, led by conductor Bertrand de Billy in his company debut, performed with thrilling conviction. There were three major company debuts among the cast, beginning with Canadian baritone Etienne Dupuis in the title role. Dupuis brought the Don to life with expressive energy, rich vocal resources, plenty of swagger and a practiced method of seduction, demonstrated in his Act II “Deh vieni all finestra,” delivered in a performance of seductive beauty.

The role of Leporello, Don Giovanni’s servant, handler and clean-up man, offers a daunting task for any bass-baritone, but Luca Pisaroni is ideal in the role — hilariously funny in his stage business and vocally assured in his Act I “Catalogue” aria as he lists the Don’s more than 2,000 conquests, with the women’s names projected on enormous overhead screens.

The opera’s soprano roles were just as well-cast. Adela Zaharia, in the role of the aggrieved Donna Anna, sang with urgency and elegance, and Nicole Car — who is married offstage to Dupuis — delivered a rich range of phrasing and nuance as the equally tormented Donna Elvira. Both singers captured the full spectrum of anguish, rage and despair in Lorenzo da Ponte’s brilliant libretto.

The production’s third soprano, Christina Gansch, sang the role of the peasant Zerlina, whose wedding to Masetto is nearly derailed when the Don puts the moves on her. Gansch, singing expressively, created a fully rounded character in a role that can come across as one-dimensional; her Masetto also emerged in an excellent characterization by bass-baritone Cody Quattlebaum. Tenor Amitai Pati, radiating goodness, sang with elegant line as the noble Don Ottavio. Bass Soloman Howard brought sonorous strength to the role of the Commendatore.

De Billy, conducting the 1788 version of Mozart’s score, made a fine debut; the Parisian conductor elicited both the opera’s dramatic thrust and its subtleties of action and characterization. And there was a second significant first behind the scenes at Saturday’s opening: that of incoming chorus director John Keene, who succeeded Ian Robertson in the post in January. Preparing the chorus for this “Don Giovanni” marked his official company debut.