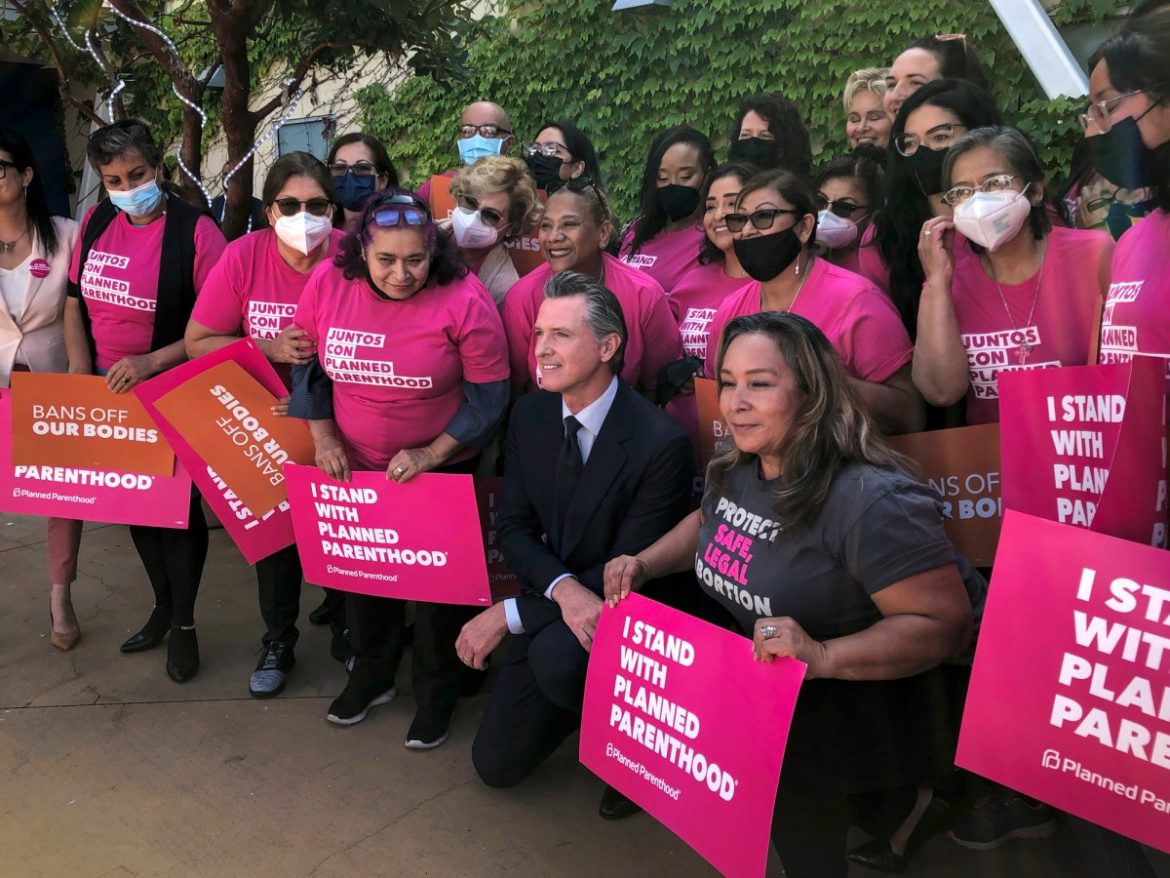 On the heels of a Supreme Court opinion Friday overturning the right to an abortion, Gov. Gavin Newsom and other state leaders held a press conference where they championed a vision of California as a sanctuary state for those seeking abortion and reproductive care.

During the press conference Friday, Gov. Newsom signed into law AB 1666, which seeks to protect those seeking abortion out of state or those who provide aid or provide them with services from civil actions.

“We will not aid, we will not abet in their efforts to be punitive, to fine and create fear for those that seek that support,” Newsom said. “We are proud to provide it — and we do.”

Shannon Olivieri Hovis, the director of NARAL Pro-Choice California, championed a raft of state legislation from this legislative session — 16 bills in all — that will not only cement reproductive access in California but for those seeking abortion from other states. That includes the 13 states that have trigger bans on abortion that will go into effect immediately now that Roe v. Wade has been overturned.

“We are addressing our provider shortages,” she said. “We are addressing our access deserts. We are ensuring that people have the practical, logistical and financial support to get here. We are strengthening our provider network. We are doing all of the things that we need to do, and we are guaranteeing that they have privacy in their records and that they are not at risk of legal repercussions, providers or patients, in the state of California based on these hostile bans that we’re going to see move forward.”

One of those bills, SCA-10, will allow voters this November to enshrine the right to reproductive freedom, including abortion and contraceptives, in the California Constitution.

Newsom noted that the legal underpinning of the opinion that overturned Roe v. Wade also call into question other constitutional rights, such as consensual sex acts, same-sex marriage, and interracial marriage.

Newsom said that he’s concerned that Republican lawmakers could pass a law that would nullify the work that California is doing to support reproductive rights.

“I’m very worried about it,” Newsom said. “If people don’t wake up, we could be living in that reality. Pay attention to what the hell is going on.”

Jodi Hicks, the president of Planned Parenthood Affiliates of California, called attention to how this decision will acutely affect a younger generation. Young people outside of California seeking abortion will now be faced with the daunting prospect of having to travel outside of the state and navigate a new health care system, she said. She said young Californians who leave the state to attend college in the 26 states expected to ban or severely restrictions abortion.

“Where our students are going to college, and what rights do they have when they go there?” she asked.