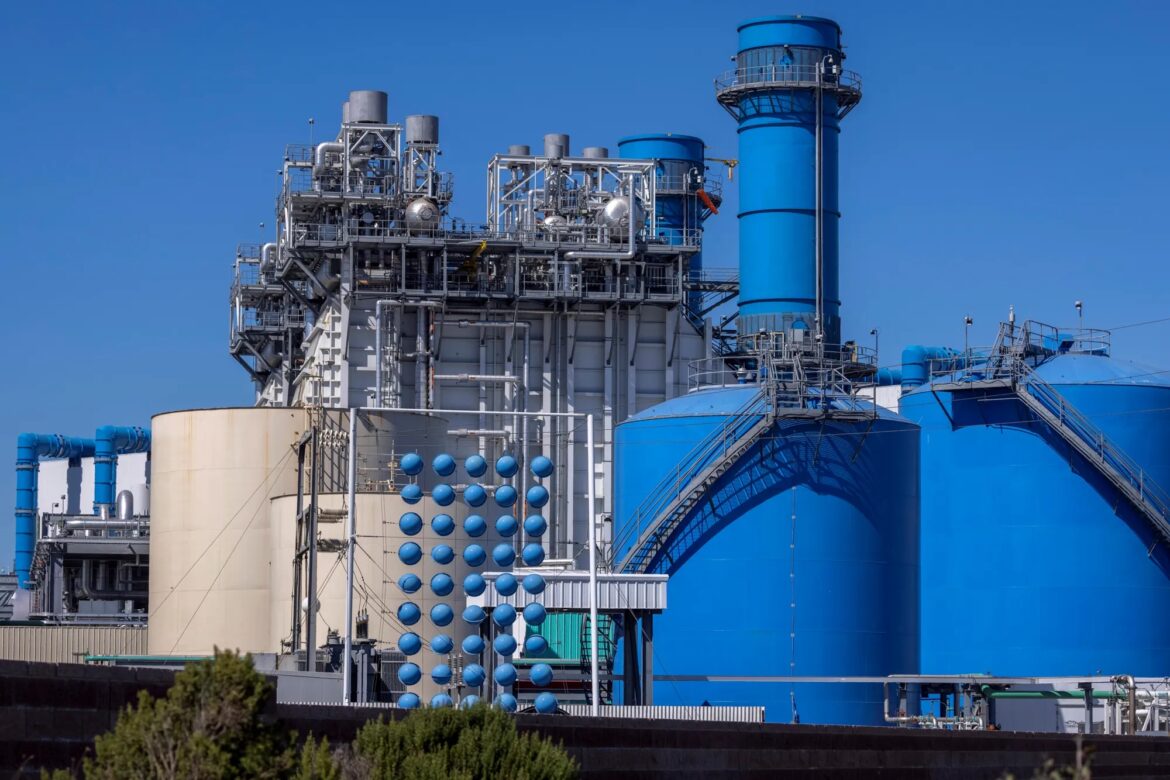 One of California's four natural gas-fired power plants that are set to close next year is in Huntington Beach. Photo by Mike Blake, REUTERS

California’s top-ranking legislators, under pressure from Gov. Gavin Newsom, are privately negotiating to include a far-reaching energy package in their budget deal that would give the state Energy Commission sole control over siting of clean-energy facilities.

The effort aims to streamline approval of solar and wind projects, and deliver more electricity to California’s aging grid while scaling back reliance on fossil fuels.

But it also could usurp local decision-making over projects, and already has triggered vehement objections across California from city and county officials. The deal also would sideline other state agencies and raise concerns about the environmental impacts of the energy projects.

As part of the budget’s energy package, legislators also are negotiating provisions that would prolong use of the state’s four remaining natural-gas power plants, which are now scheduled to begin going offline next year. The closures already were delayed by state officials by three years.

The trailer bill, if enacted, would address one of Newsom’s pressing concerns — keeping the lights on in California during a summer that’s expected to strain the state’s power supplies. It is the kind of political Kryptonite that brought down former Gov. Gray Davis during the energy crisis of 2000-2001.

The negotiations were ongoing today, and legislators and Newsom declined to discuss them or release any documents or details, saying many provisions were yet to be agreed upon. “Unfortunately we can’t comment on negotiations or pending legislation,” said governor’s office spokesman Alex Stack.

But environmentalists and representatives of clean-energy companies described to CalMatters details that they say concern them, and they expressed outrage that the process is behind closed doors. They said the talks appear to backpedal on California’s pledge to wring carbon from the state’s power grid in the coming decades in an effort to battle climate change.

“It’s beyond frustrating to see the governor and Legislature once again trapped in a debate over how long to keep old gas plants up and running, when we know the damage they cause,” said Mike Young, political director of California Environmental Voters.

Environmentalists said streamlining energy projects can translate into accepting shortcuts that damage the environment, such as wetlands and endangered species.

The trailer bill being negotiated “gives me heartburn,” said Brandon Dawson, director of the California Sierra Club, saying environmental laws “are there for a reason.

“We support the effort to get clean energy on the grid quickly, but this bill has weak environmental and public health protections, props up diesel and gas plants and is going to create conflicts between county and state agencies.”

The behind-closed-door discussions highlight the tension between maintaining sufficient electrical power and the state’s slow transition to renewable energy.

A draft of a document under negotiation first posted on May 18 says renewable energy won’t be sufficient to supply the state during extreme weather and wildfires, making it likely that gas power plants and diesel backup generators “will be required to maintain reliability during extreme events.”

But environmental advocates and energy experts say the bill would not alleviate any potential brownouts or power unreliability in coming months because power plants can take years to build. They worry that it may set back the state’s climate-change plan.

“Spending billions of dollars to prop up old fossil fuel facilities for another few years will set a dangerous precedent,” Young said.

“More importantly it could have long-term implications on the development of California’s energy market — and could potentially undermine the state’s ultimate goal of building a clean, reliable electric grid that provides power to every community that needs it.”

Clean energy advocates and others questioned the lack of transparency in this part of the budget process, arguing that discussions about policy issues should be conducted in the Legislature and subject to open debate and public comment.

Assemblymember Luz Rivas, a Democrat from San Fernando who chairs the Assembly’s natural resources committee, made that point in a hearing about the energy proposals earlier this month. She said she would prefer that it move through the public legislative process, “where we can work on it more, and be able to review it and make any changes or have a public hearing on it, instead of just inserting it into the budget.”

Under the proposal, the state Energy Commission, which is appointed by the governor and legislators, would fast-track energy projects and promise developers an environmental review decision within 270 days, substantially faster than most reviews are typically conducted.

This “opt-in” program for developers would eliminate their need to obtain local approval as well as oversight from state agencies responsible for protecting water, land use and endangered species.

In addition to power plants, the Energy Commission would also take charge of permitting some transmission lines as well as facilities that manufacture components for renewable energy plants.

The opt-in process for developers would remove control from local agencies and planning boards, which has spurred controversy among city and county elected officials.

Some local officials and residents oppose the siting of large-scale solar projects. Kern County officials balked at approving a large solar project last year because of a solar property tax exclusion and the Newsom administration’s ban on new fracking permits, which county supervisors viewed as harming the region’s oil industry.

City and county officials oppose the loss of local control over energy projects in their own jurisdictions. The California State Association of Counties and the League of California Cities sent letters to legislators urging them to allow local authorities to authorize permits and have an opportunity to comment on environmental impacts of projects.

The League of California Cities told legislators that it is “opposed to the state usurpation of local permitting authority.” The group requested that the bill include a three-year sunset provision.

The Rural County Representatives of California, which advocates on behalf of 39 small counties, opposes the Energy Commission control, saying it “is overly broad, usurps local control, excludes local governments from meaningful involvement in major development projects within their jurisdictions, and could result in even more litigation.”

Part of the bill under negotiation would tell the state Department of Water Resources to procure energy contracts that would not be subject to CEQA, California’s environmental quality law. The bill apparently does not direct the agency to focus on or prioritize clean energy sources.

The California Energy Commission, in a statement shared by Newsom’s office, acknowledged that new projects “may include natural gas generators with modern emission controls… It is expected that fossil-fuel resources will be dispatched only in the event of grid emergencies.”

The proposal is needed “to address the challenges of increasingly frequent and extreme climate-driven events and supply chain and related challenges,” the commission said.

Assemblymember Bill Quirk, a Democrat from Hayward who spoke at a June 1 hearing, reminded his colleagues about the last time the Department of Water Resources got involved with buying power: During the 2001 energy crisis the department signed long- term contracts that cost the state more than $42 billion.

“This is a big trainwreck. DWR should never, ever be given the responsibility, again, of procuring energy. They procured energy at much larger prices than were justified,”  he said at the hearing. “And that’s why we spent 20 years paying off that debt.”

The memory of that energy crisis is imprinted on the minds of many Californians and serves as a cautionary tale among elected officials, as it ended Davis’ political career. The power crisis began in the summer of 2000, and persisted even after Davis issued emergency orders to alleviate the problem of statewide rolling blackouts. Although Davis was reelected in 2002, a frustrated electorate recalled him the next year.

“It’s disappointing to see state leaders once again stuck in the same last-minute debate over what resources are needed to keep the lights on during the hot summer,” said Bill Parsons, a vice president with American Clean Power Association, which represents  renewable energy companies.