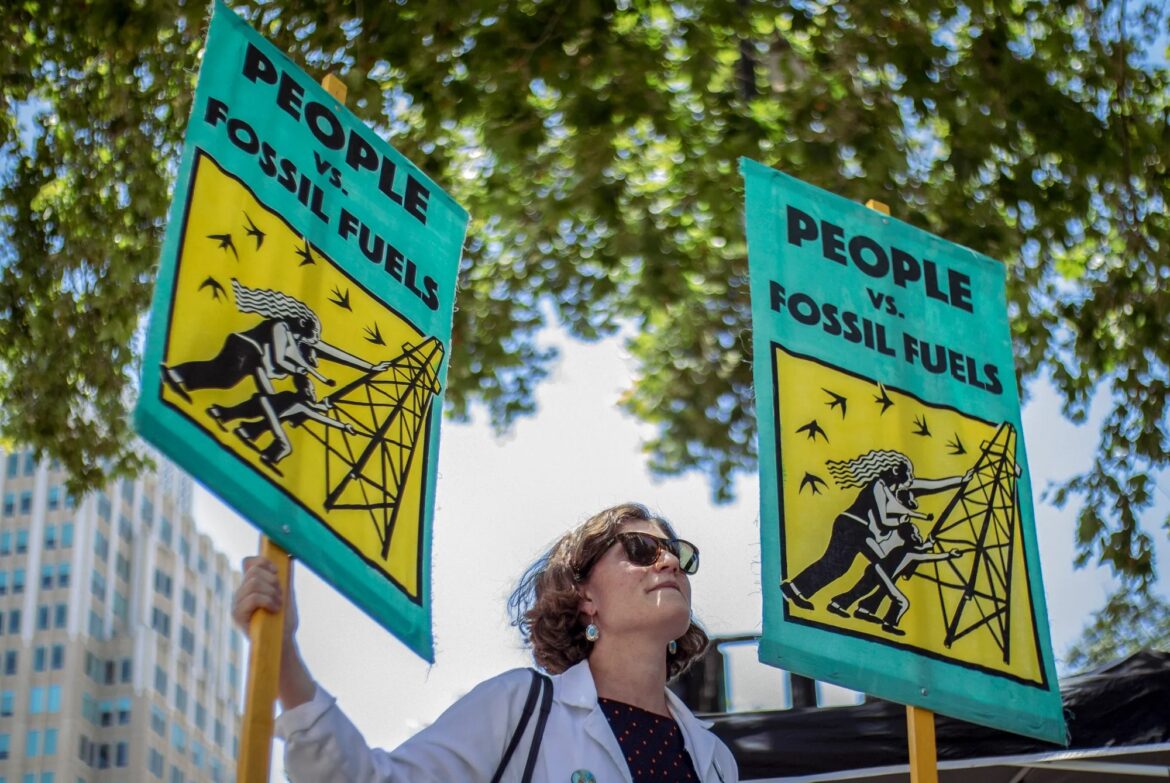 Amanda Millstein, a pediatrician from Richmond, Calif., participates in a rally at the California Environmental Protection Agency offices in Sacramento on Thursday, June 23, 2022. Photo by Rahul Lal for CalMatters

California’s sweeping climate plan would increase electricity consumption by as much as 68% by 2045 – which would put an immense strain on the power grid unless hefty private and public investments are made in clean energy, state air quality officials said today.

The California Air Resources Board is holding its first day-long public hearing today on its proposed climate-change blueprint, called a scoping plan, for reducing greenhouse gases.

The far-reaching strategy would transform the state, scaling back the use of fossil fuels by 91% by 2045 and scaling up electric cars and use of renewable energy, such as wind and solar.

The plan aims to fulfill state mandates to reduce planet-warming emissions 40% below 1990 levels by 2030 and achieve carbon neutrality by 2045.

At least 450 speakers lined up to voice concerns about the plan at the hearing, which is expected to continue late into the evening and possibly on Friday. The hearing was temporarily interrupted when environmentalists and their supporters who were rallying outside entered the packed room, protesting the state’s plan and demanding environmental justice.

The climate plan has been criticized by environmentalists for too slowly phasing out fossil fuels and relying too much on technologies to remove or capture emissions, while the oil and gas industry has said the ramp-up of clean energy is too ambitious.

The plan “is very, very aggressive in terms of the deployment of clean technology,” said Rajinder Sahota, the Air Resources Board’s deputy executive officer for climate change and research.

“If we can actually make all of these things happen, there are significant reductions in fossil fuel and methane that we would see by 2045. All of it hinges on implementation and successful deployment of that energy infrastructure and technology.”

To handle the surge in electricity demand, air board staff said the state needs to expedite the construction of new solar and wind infrastructure, improve existing power lines and build battery storage capacity. In addition, California will need backup dispatchable power to account for energy losses when renewables like wind and solar can’t produce electricity due to changes in weather.

Without these major improvements and investments, California would have to keep relying on climate-warming fossil fuels, particularly natural gas. An additional 10 gigawatts of natural gas capacity would be needed by 2045 to support the power grid if sufficient renewable power is not available by then, air board officials said.

Secretary for Environmental Protection Jared Blumenfeld said the permitting and approval process of renewable energy projects needs to be accelerated to meet the state’s climate targets.

“We have to be able to get projects on the ground quicker,” he said. “Offshore wind will take 15 years to permit and deploy. We don’t have 15 years. So part of our effort needs to be, not only to understand the power of our ambition, but how the hell do we get this done? We need reforms in those areas.”

Sahota added that streamlining the permitting process for new energy facilities is important, but raised concern that part of the challenge is the restraints imposed by city and county officials. She said while there’s widespread support for renewable energy, many residents may not want that infrastructure in their communities.

“We have an obligation as a state to make sure that energy is reliable,” Sahota told CalMatters in an interview. “But we’re fighting against some of these things, like what we want to have available and where do you build it and where can you build it?”

Air Resources Board Member Diane Takvorian, who is executive director of an environmental justice group, said ensuring the reliability of the grid is “an important concern.” But she added that increasing power generation is the responsibility of other state agencies, such as the Public Utilities Commission, while the air board must focus on battling climate change.

Takvorian said she wants the plan to be revised so that it includes more direct emission reductions at industries that burn fossil fuels and prioritize a faster timeline. “I’m very hopeful that the final plan is much more aggressive than the draft plan,” she said.

Alice Reynolds, president of the California Public Utilities Commission, the regulatory agency which oversees the state’s power operations, said California has made great strides in the past two years in increasing the reliability of the grid. She said the agency has also been escalating the installation and improvement of energy storage technologies, despite supply chain challenges brought on by the pandemic.

But, she added, “the hard work really is yet to come.”

“We need to think about how the energy sector can continue to grow — double or triple —  to meet decarbonization goals,” she said. “And we need to focus on what it takes to meet the needs of an evolving grid, especially during the hours when the system must ramp up to replace our massive solar fleet as the sun sets.”

Some speakers at the hearing expressed concerns that the accelerated transition to an electrified technology could result in higher utility bills that would disproportionately affect disadvantaged communities in inland and rural areas. They also said they worry that the lack of proper infrastructure could also increase the likelihood of power outages.

The Air Resources Board is expected to hold a second hearing on the climate plan in August and vote in the fall.

A push for quicker scaleback of fossil fuels

The hearing comes amid growing concerns that the plan relies too heavily on strategies that extend the life of the fossil fuel industry. In the weeks since the draft scoping plan was released, air board officials have faced intense public and media scrutiny for its proposed use of carbon removal and capture technologies for oil refineries and other industries.

In their initial modeling included in the plan, air board officials said the use of carbon capture technologies were already deployed in 2021 and would ramp up quickly by 2030. The draft says about 2 million tons of carbon dioxide were captured in 2021 — even though no facilities exist in California. At today’s meeting, air board staff said its new modeling would be based on startup of carbon capture technologies in 2028.

At today’s hearing, dozens of environmentalists held a rally outside the main headquarters calling for air board members to reconsider the plan’s reliance on carbon capture and urged them to push for carbon neutrality by 2035, a decade earlier than staff’s 2045 goal.

Environmental justice advocate Colin Miller, who was reading on behalf of Jasmine Martinez, an organizer with the Central Valley Air Quality Coalition, said carbon capture and storage could pose potential public health threats in nearby communities.

“The technology would bring even more health and safety risks, including groundwater contamination, leaks that can lead to suffocation, asphyxiation and death, and earthquakes,” he said. “Even if (carbon capture and storage) was the magical tech solution that the plan says it is, it would only address the carbon emissions. (There would still be) high risk to frontline environmental justice and indigenous communities.”

But oil and gas companies say the state should reevaluate its “aggressive” pace for phasing out oil and gas, arguing that it will have a detrimental effect on Californians and their economy.

In a letter to California Assembly Speaker Anthony Rendon, Catherine Reheis-Boyd, president and CEO of the Western States Petroleum Association, said some policies the board is proposing — such as the ban on sales of new electric vehicles by 2035 and eliminating in-state oil production — would increase fuel costs, especially for lower-income residents.

Oil and gas companies “recognize these extraordinary times and stand ready to work with policymakers on realistic energy policy solutions and the role our industry must play to provide cleaner, affordable energy California families and businesses need now and for decades to come,” Reheis-Boyd wrote. “While California may be leading with its policy ambitions, it has not been without significant cost to the entire California economy.”

“Technology bans, mandates, and limiting affordable options for Californians is not leadership,” she wrote. Instead, the companies say the state should consider alternative, less-restrictive policies that give more leeway to the industry to continue operating in the state.

On the other hand, members of the state’s Environmental Justice Advisory Committee Meeting said the state should remove the use of carbon capture and storage, instead relying on clean energy technologies and deepening investments in ecosystem restoration.

Sharifa Taylor, a committee member and advocate for Communities for a Better Environment, said the deployment in carbon capture and storage will only continue to hurt low-income communities of color already burdened by air pollution.

“This is a dangerous, expensive and unrealistic protocol to sacrifice low-income communities of color,” she said. “(Carbon capture and storage) in California refineries is not a solution.”

To address some of these equity concerns, staff said they would include a community vulnerability metric in the final version of the plan to guide the state on how to allocate resources for disadvantaged communities. These include residents living next to freeways and stationary pollution sources, who are most affected by environmental hazards, air pollution and climate impacts.

The metric would be used to identify certain needs in those communities where the state can direct funds and resources. For example, the board would identify how communities plagued by extreme weather events could benefit from more resources or funds from the state, Sahota said.

“If you’re a census tract that is more susceptible to heat, then we can deploy and make sure that there’s better air conditioning or cooling centers to help build that resiliency to withstand those climate impacts that are going to happen,” Sahota said.

The role of the state’s cap and trade program, which is a greenhouse gas market for industries that allows them to buy and sell credits, also has been questioned by experts and advocates. In an abrupt reversal from the 2017 plan, this year’s 228-page document includes just six pages mentioning how the state’s landmark program could work in helping California meet its greenhouse gas reduction goals.

Staff plans to reconsider the role of cap and trade in 2023.

Catherine Garoupa White, executive director of the Central Valley Air Quality Coalition, said the board should assess the role of and reduce dependence on the program in the final version. She said air board staff should also improve data collection to better track how emissions are being reduced by each strategy to ensure transparency in how the state is meeting its targets.

She added that air board staff should create a digitized mapping tool that would allow people to view how much pollution a facility is emitting in their communities.

“While we may not be in agreement about the overall role of the cap and trade program, generally we are in alignment on the need for robust analysis and program adjustments,” she said.