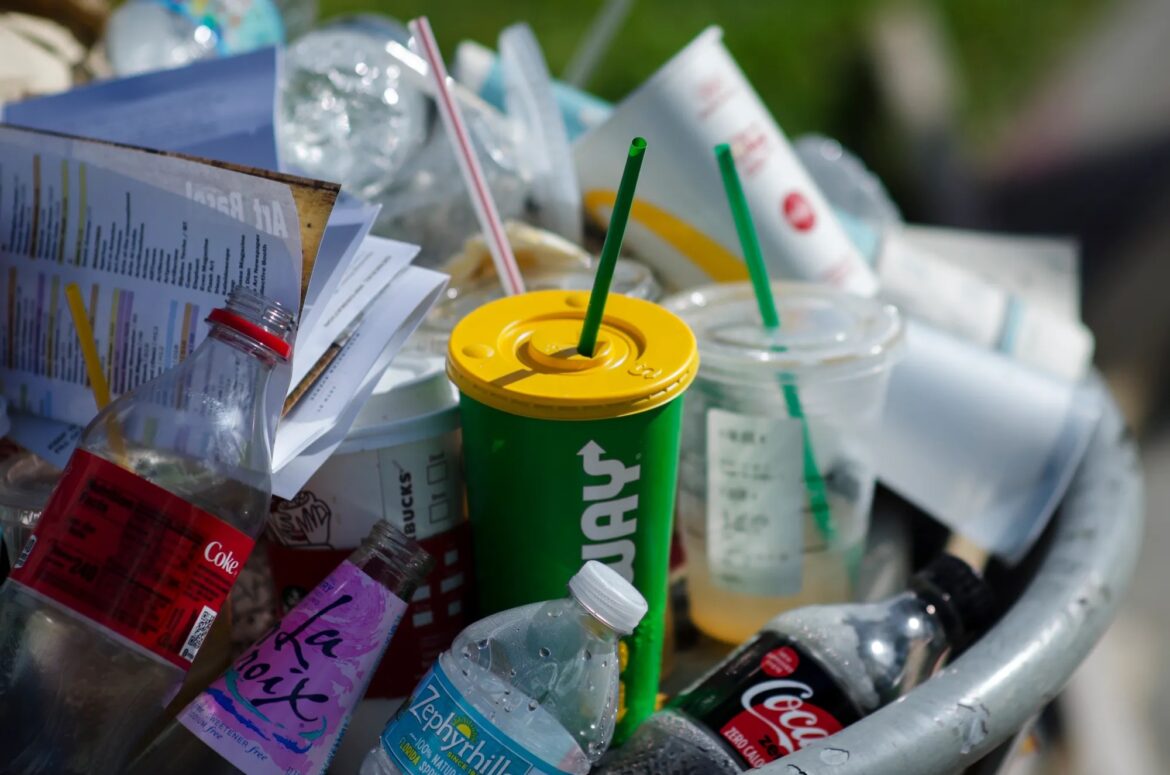 The California environmentalists who back a November ballot measure to reduce single-use plastics withdrew it just ahead of the Thursday deadline, following fierce negotiations with lawmakers and others on a bill that aims to achieve many of the same goals and that is supported by some influential environmental organizations.

The three signatories of the initiative said in a joint statement late Wednesday that they would withdraw it once Gov. Gavin Newsom signs Senate Bill 54 into law.

“However, if the California State Legislature is not convinced we can implement these plastic pollution reduction reforms, disadvantaged community protections, and conservation programs and they do not pass SB 54, we are ready to take the issue to the voters in November,” they wrote.

Wednesday night, the bill sailed through the Assembly on a 63-1 vote. Thursday morning, the state Senate voted 29-0 to send it to Newsom’s desk. Later Thursday, the governor announced he had signed the bill into law, saying: “We’re holding polluters responsible and cutting plastics at the source.”

Sen. Bob Hertzberg, a Van Nuys Democrat, called it the “biggest bill of the year,” one that will have ripple effects “all across the county and across the world.”

But Sen. Nancy Skinner, a Berkeley Democrat, cautioned: “I hope that we are not too late in addressing this scourge of plastics.”

The drama previously peaked Tuesday at a hastily called meeting of the Assembly Natural Resources Committee, which approved the alternative legislation on a bipartisan 9-0 vote after it was amended June 16, Friday night and again Sunday.

“It’s a groundbreaking effort to reduce plastic pollution that has brought environmental and business groups together,” he told CalMatters. “This is what the voters asked us to do: solve these problems together.”

Californians Against Waste, which opposed earlier versions of the legislation, was convinced.

“Based on the most recent amendments and the author’s commitment to continue to work on the one outstanding issue raised by environmental justice groups around definitions, we are happy to express our support today,” Nicole Kurian, policy analyst with the group, told the committee.

The intense, up-to-the-last-hour talks reveal a deep split in the environmental community about how best to make real progress in reducing plastic pollution and to make practical fixes to California’s badly broken recycling system — and how closely to cooperate with the plastics industry in any solution.

And the question of whether to do the deal reflects a calculation of whether a ballot measure could pass with a potentially divided environmental lobby and against the spending might of the plastics industry.

The bill doesn’t do everything sought by the ballot measure proponents. But several major environmental groups called Sunday for the Legislature to pass the bill.

SB 54, however, gives the plastics industry more time to comply with the mandates and regulations in the ballot measure — until 2032 instead of 2030 — that are designed to ensure all single-use packaging and foodware is recyclable, reusable, refillable or compostable. In California, only a small portion of all plastic waste is recycled. About 85% ends up in landfills.

After the bill’s passage in the Legislature, the Plastics Industry Association said it could not support SB 54, though it said that the bill “presents opportunities to continue to work to solve the recycling issues in the state of California in a way that a ballot initiative would not.”

“Should momentum on a number of these policy provisions occur in the coming years that potentially address remaining concerns, this legislation may prove to be a program our industry could get behind,” association CEO Matt Seaholm said in a statement.

The bill will still impose a fee on single-use plastic packaging and foodware, with proceeds going to CalRecycle, the state Natural Resources Agency and local governments.

In a June 21 joint letter to Assemblymember Luz Rivas, the chairperson of the Assembly Natural Resources Committee, the League of California Cities, California State Association of Counties and Rural County Representatives of California said they support the bill because it would help them meet their challenges to recycle plastics.

The agreement is the latest under a 2014 law designed to keep costly measures off the ballot — but also used by special interests to pressure the Legislature to approve reforms. It’s the second one this session: Last month, Newsom signed a bill to reform California’s medical malpractice law and proponents pulled their November ballot measure.

But the legislative path to the plastics deal has been long and messy.

Allen first initiated the bill in 2019 with a coalition of environmental groups, but it failed to pass. Another attempt in 2020 also failed, barely.

After that, some of those environmental groups split off to try the ballot measure approach instead. They teamed up with Recology, a San Francisco-based waste management company,  which, separately from the ballot initiative, has come under fire for allegedly overcharging the city.

Earlier in June, the ballot measure sponsors wrote to Allen and legislative leaders that SB 54 did not include stringent enough protections. They want any plan to include:

The latest version of SB 54 bans chemical recycling and clarifies that foodware made from polystyrene is banned unless at least 25% of it is recycled by 2025.

Californians Against Waste, Natural Resources Defense Council and Sierra Club California had also objected to compromises since the 2019 bill. In a June 19 letter to legislative leaders, they also raised alarms about relying on the plastics industry to achieve the reduction goals.

The prior bills that failed and the deal-making on the current version “show the stranglehold that corporate polluters have over legislative bodies.” the letter argued. “This is precisely why the state has a Citizen’s Initiative process. The people of California want to see decisive action to turn the tide on plastic pollution, and we have no doubt that voters will support the ballot measure that will be before them this November.”

A coalition of nearly 20 environmental justice groups echoed similar concerns in a separate June 19 letter to the Legislature.

After the committee vote, Victoria Rome, director of California government affairs with the Natural Resources Defense Council, said while the committee “has made great strides in addressing” the group’s concerns, “we will continue to work with our environmental justice and public health partners to ensure that the bill is as strong as possible.”

It joins several other prominent environmental groups — including the Nature Conservancy, Environment California and EnviroVoters — that earlier said the bill will lead to clear and enforceable reductions in plastic packaging of at least 25%, would boost California’s recycling efforts by requiring single-use plastics to be reusable or compostable and would mandate that plastics producers provide funding for cleanup efforts. The Ocean Conservancy estimated that SB 54 would eliminate 23 million tons of plastics in its first 10 years.

Better to have industry on board?

Allen argues that his bill includes more specifics than the ballot measure, and that the buy-in from the plastics industry would lead to better results.

But on Wednesday, a key industry group, the American Chemistry Council, said it is still concerned with elements of the latest bill, including the definition of chemical recycling “so new, innovative technologies that keep hard to recycle plastic out of the environment and landfills count” toward the goals.

Still, the council said it’s better than the ballot measure, which it says would raise consumer costs by $9 billion a year.

“Now we will focus on working with lawmakers, regulators, and other stakeholders to help ensure the implementation of SB 54 matches its intent: eliminating plastic waste and improving plastics circularity, while minimizing costs on Californians,“ Joshua Baca, the council’s vice president for plastics, said in a statement Thursday.

The “producer responsibility” model in SB 54 wouldn’t be the first. It’s been used to curb waste from carpet fibers, mercury thermostats and mattresses in California.

Heidi Sanborn, founder and director of the National Stewardship Action Council, says she has used what she’s learned from the successes and failures of those programs to help craft SB 54.

In the carpet fiber program, for example, compromises in the bill meant there was no specific recycling rate or a target date for producers. The paint stewardship program also had some early bumps, but with bills along the way to refine the program, about 92% of the more than 4 million gallons of paint collected is being reused or recycled, according to its 2021 annual report.

“When you have the producers running the program, the key thing is the set-up. The devil is in the details,” Sanborn said. “You’ve got to have a state agency assigned to oversight and enforcement, give them tools in the law, and then they have to use them.”

But environmental justice and other groups are more than skeptical. “Suffice it to say,” they wrote, “that we just don’t have confidence that an industry so prone to deceiving the public for so long about the impacts of its products on our communities and our planet will now take the starring role in its own demise voluntarily.”

California once exported about a third of its recyclable materials, much of it to China, according to estimates from CalRecycle. But in 2017, China announced that it would tighten contamination standards and ban imports of certain types of waste.

Now, California’s recyclers are stockpiling or landfilling plastic products, and even paper that they struggle to sell. rePlanet, a major collector of beverage containers, shuttered its 284 centers in California despite receiving $25 million from the state.

Since then, several bills have attempted to address the crisis — with mixed success.

In 2018, the Legislature placed restrictions on single-use plastic straws, and in 2020, required plastic bottles to contain at least 50% recycled plastic by 2030. Last year, lawmakers limited which products are allowed to use the triangular “chasing arrows” recycling symbol.

Others, including the state’s ban on most single-use plastic carry-out bags, were done via ballot measure.

“Plastic pollution is at an environmental tipping point….The impacts it has on our oceans, rivers, parks, playgrounds, and food sources can no longer be ignored,” Rivas said in a statement after Tuesday’s committee vote. “The amendments proposed by my committee have further strengthened SB 54 when it comes to eliminating plastics from our communities.”

Martin Bourque, executive director of the Berkeley Ecology Center, which runs the city’s curbside recycling program, said he was thrilled that the bill will “finally place the responsibility where it belongs, on the shoulders of the producers.”

“As the nation’s longest-running curbside recycling program, we know firsthand how devastating the aggressive switch to plastic packaging has been on recycling programs, disadvantaged communities, public health, and the environment,” Bourque said. “The plastic industry spends millions of dollars every year to trick the public into thinking all plastic packaging is recyclable. Now they will have to rethink their packaging strategies or pay full cost for their impacts.”