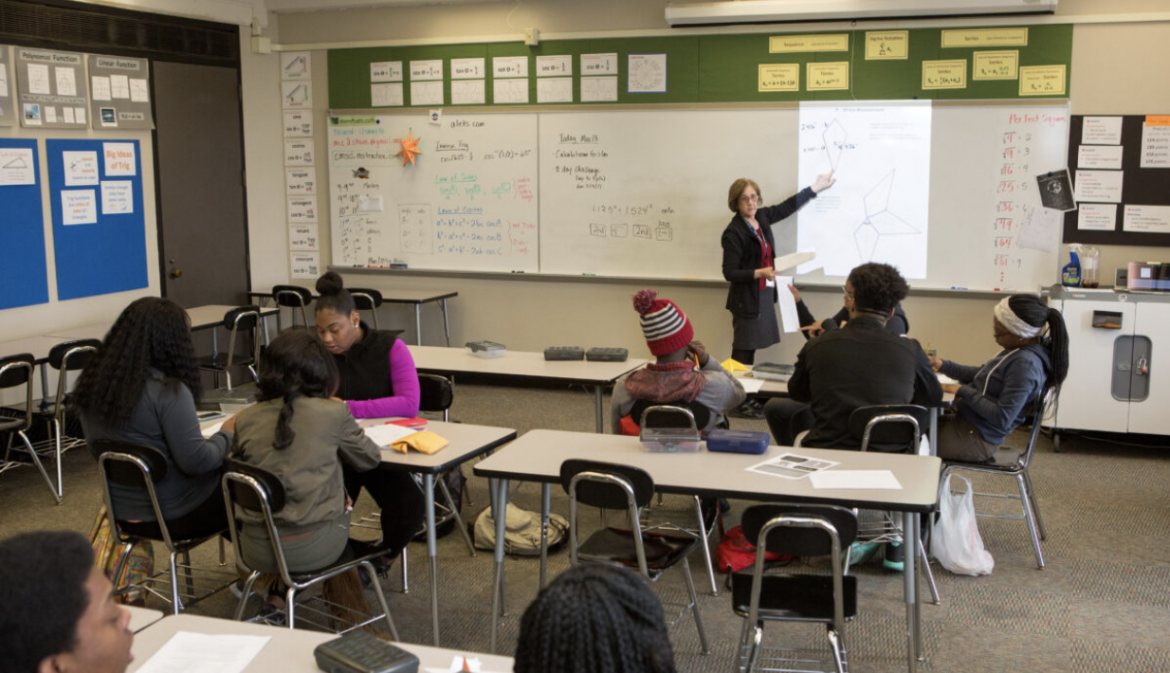 A math teacher explains how to calculate the angles of a star using trigonometry. (CREDIT: ALLISON SHELLEY FOR AMERICAN EDUCATION)

Lynda White, who taught English, creative writing and social studies at El Monte Middle School in the small Central Valley town of Orosi for 21 years, started having panic attacks this school year as she drove to the campus.

“I would sit in my car, taking slow breaths, trying to calm myself down because I knew when I got on campus it would be horrible,” White said.

The veteran educator was among thousands of California teachers who quit their jobs before this school year ended. Some teachers left because of the challenges of teaching during a pandemic, while others were fearful they would contract COVID-19 and some were offered higher-paying jobs. Many just burned out.

White was exhausted and disillusioned from dealing with bad student behavior, which had escalated since schools reopened after the pandemic closures. Students regularly arrived late to classes, fought with one another, interrupted lessons and ignored her direction. White said she sent disciplinary referrals to the principal’s office, but no action was taken.

“I had thought about it, and I was planning on retiring in December,” said White, who is 58. “I thought, it is just a couple of more months. I was counting the days. The way I thought of it in my mind is, I don’t want to be a quitter.”

Teachers, already stressed from distance learning, believed things would get better after schools reopened. They knew it would be difficult for students to adjust to returning to school after almost a year away, but they weren’t prepared to deal with the social-emotional trauma the kids had experienced and their reaction to the shift in their routines, White said.

“I realized I’m on my own in this,” White said.

White attempted to restore order in her classroom by giving students who misbehaved lunchtime detention. Most didn’t show up. Those who did were often disruptive. It was during one of these sessions, after a student yelled at her and stormed out of class, that White realized she was done with teaching.

White went to the principal’s office and told administrators she was leaving for the day. The next day her doctor put her on stress leave, which continued until her retirement in December.

In the last six months of 2020 – after the pandemic began – there were 5,644 teacher retirements, a 26% increase the same period the previous year, according to the California State Teachers’ Retirement System. By the end of the school year, 12,785 teachers had retired – 8% higher than the previous year. Data for this school year is not yet available, but CalSTRS reports that the number of retirements has leveled off since 2020.

Most of the retirees who completed a CalSTRS survey said they retired earlier than they had planned. Almost half of the retirees surveyed in the 2020-21 school year said challenges related to teaching during COVID were among the primary reasons for their early departure.

“I can’t speak for others, but even in our worst years prior to COVID, we did not see the mass exiting that we do now,” said Lindsay Mendoza, president of the Cutler-Orosi Unified Teachers Association.

These resignations come as California school districts are already struggling with staff shortages that have meant larger class sizes and more teachers giving up preparation and lunch periods to cover classes when other teachers are sick.

It hasn’t been an easy year for teachers, said Kurtis Obispo, a school psychologist. Many haven’t recovered from the emotional stress brought on by the pandemic, school closures and the many changes they have had to endure since.

“I know a lot of them felt like things were changing too quickly,” he said. “Every time they adjusted, they had to readjust. There were COVID protocols, monitoring of attendance for synchronous and asynchronous instruction. Some of the teachers are fed up and at that point where any little change is triggering.”

Teachers also are not feeling appreciated, he said. Families, stressed and worried about whether their children are behind, often have taken out frustration on teachers.

The social-emotional needs of students this school year were so high and staffing so low that Obispo also quit his job midyear. There were more fights on campuses and more students being designated as a threat to themselves or others, said Obispo, who worked for Escalon Unified School District in San Joaquin County. Students had a hard time communicating with one another and were more anxious than before the pandemic, he said.

“It was an extremely difficult time,” Obispo said. “I was breaking up fights. I was put on TikTok recently because I broke up a fight.”

Obispo said that parents and students called him on weekends and nights. He took the calls because he knew the students needed him.

“I couldn’t maintain the workload with any type of fidelity,” he said. “I felt I was so overworked I was going to miss something.”

Obispo gave his notice to Escalon Unified in December and is now the director of special education at Team Charter Schools in Stockton, where he also serves as the school psychologist.

The exodus of teachers from the profession is not just a California problem. The Bureau of Labor Statistics reported that about 600,000 teachers in public education in the United States quit between January 2020 and last February.

The National Education Association, the nation’s largest union, surveyed its membership in January on key educational issues. More than half of the union’s members indicated they are considering leaving the profession earlier than planned. Nearly all, at least 90% said burnout and pandemic-related stress are serious problems.

Caitlin Santos was in her second year as a special education teacher at Norristown Area School District, in a suburb of Philadelphia, when she quit in October after being put on stress-related leave by her doctor. Now she works from home as a corporate trainer.

Santos was quickly overwhelmed by the behavior problems of her students and her own health concerns after school began this year. Students in her special education class were required to wear masks because of the pandemic, but they seldom kept them on. She worried about her son, who was born prematurely and had asthma. Sometimes student behavior escalated to shouting at and shoving their teacher, she said. Sometimes they threw furniture. Students she sent to the office were often sent back to the class.

Then the district doubled her caseload.

“The stress of everything completely did me in, and I realized if I stayed I would not be healthy in any shape or form,” she said.

There can be repercussions for teachers who decide to leave their jobs before the end of the school year. Although each school district’s contract with its teachers is different, many can prevent a teacher from taking other jobs if they quit during the contract. Additionally, the California Commission on Teacher Credentialing can take disciplinary action, including suspending a credential for up to one year if the teacher does not have a good reason for quitting before the contract expires.

Officers from local teachers unions across California report a dramatic increase in the number of teachers calling them for information about how they can break their contracts with districts.

Lodi Education Association President Michelle Orgon said teachers who contacted her wanted to take better-paying jobs with less stress or wanted to move to school districts closer to their homes. Others, scheduled to return from maternity leave, didn’t think returning to school was worth leaving their newborns.

United Educators of San Francisco President Cassondra Curiel attributes the recent increase in resignations, in part, to the shift in the national narrative about teachers.

“No one wants to live with a nation full of vitriol and continue in the profession when pundits are pumping out the message that something is wrong with what you are doing,” she said.

Teachers across the country have been reaching out to Daphne Gomez with questions about whether they should leave teaching and how to do it. The founder of Teacher Career Coach, based in Los Angeles County, uses her podcast to dole out advice on breaking teaching contracts, whether teachers should stay for the pension and how to find a job outside education, among other topics. She also offers digital courses that help teachers identify a new career path. People are listening: She has more than 86,000 Instagram followers.

When Gomez decided to quit her job as a fifth-grade teacher in Burbank Unified in 2017 because of stress, she had no idea how to leave the profession and find a new career. Eventually, she found a job as a professional development trainer for Microsoft. After training sessions with teachers, she was often asked for advice on how to transition from education to a corporate job.

She says teachers are taking part in the Great Resignation because they are feeling, for the first time, like there are other opportunities.

“Despite all of this, I still miss teaching,” she said. “For years it was tolerable. It was challenging. At the end of every year, I could look back and think I made a difference. I could name specific students whose lives I had impacted in a positive way. I made them believe that they could do the work and could be successful. The last year, I couldn’t look at any students and say I had made a difference for them and would make a difference for them.  It was an exercise in futility. I was frustrated. They were frustrated.”