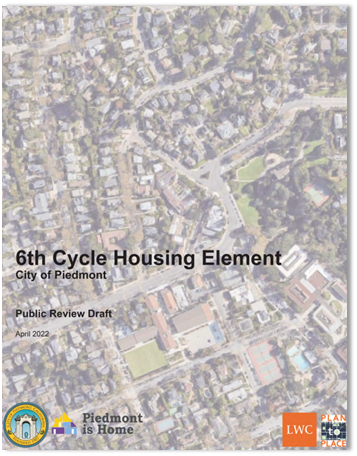 In an email to residents on June 10, the City of Piedmont said it would conduct a public hearing on Monday, June 20, at City Hall as it asks City Council to direct staff to provide the Draft Housing Element for the 6th Cycle to the California Department of Housing and Community Development for its 90-day review.

The city has been working to update its housing element to comply with new state requirements around increasing the number of affordable housing units in town. It most recently held a Town Hall on the subject on June 7. (See reporting below.)

From the City email:

The Draft Housing Element is available for public review on the City’s web page at https://piedmont.ca.gov as well as https://piedmontishome.org. It is also available at City Hall, located at 120 Vista Avenue, Piedmont, CA 94611, between the hours of 8:30 a.m. and 5:00 p.m., Monday through Friday.

On May 12, 2022, the Planning Commission recommended that the City Council direct staff to send the Draft Housing Element to HCD for its 90-day review.

All City Council meetings are televised live on KCOM-TV, the City’s government access TV station and will be available through streaming video on the City’s website https://piedmont.ca.gov/government/meeting_videos

The City of Piedmont will publish the meeting agenda not less than 72 hours prior to the meeting. The agenda will be available online at: https://piedmont.ca.gov/government/city_council

The agenda will also be posted at City Hall and Police Department bulletin boards.

QUESTIONS AND INQUIRIES regarding this matter, or to review information for the project described above, can be directed to:
Pierce Macdonald, Senior Planner
Piedmontishome@Piedmont.ca.gov
(510) 420-3063