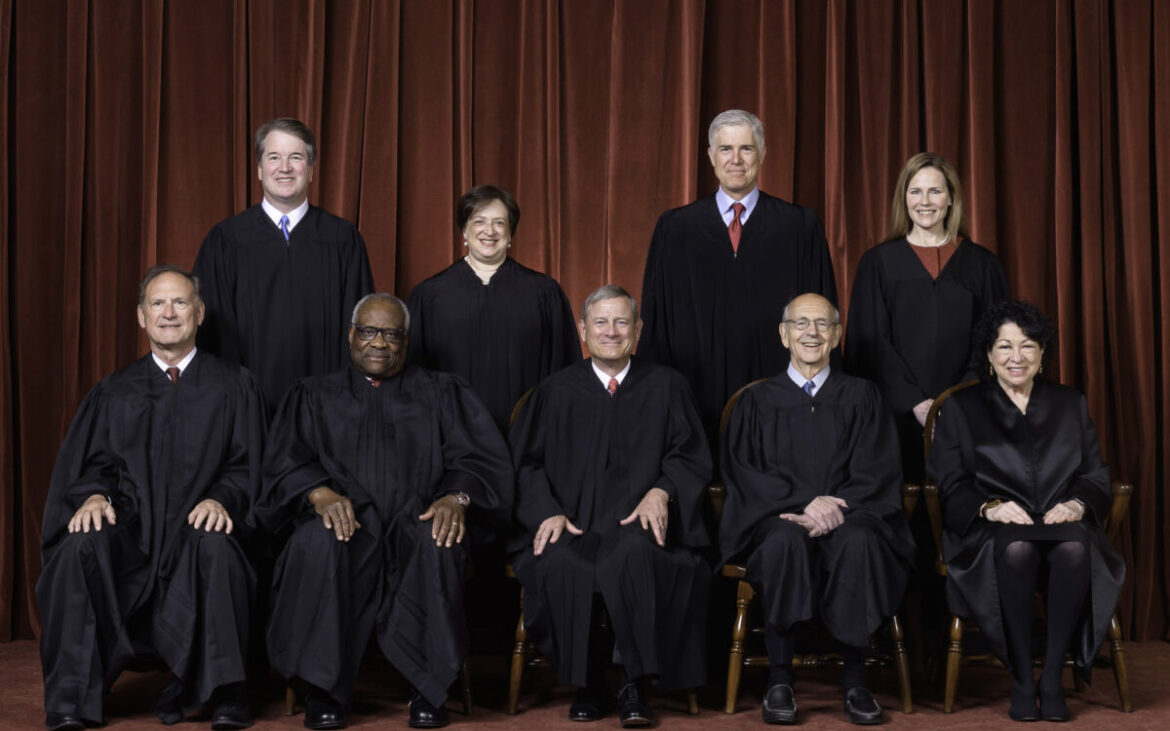 CREDIT: FRED SCHILLING / COLLECTION OF THE SUPREME COURT OF THE U.S.

For all the controversy surrounding it, the latest ruling by the U.S. Supreme Court broadening the obligation of states to fund private religious schools will have no direct impact on California.

California does not finance private schools, at issue in the 6-3 decision on June 21 involving the state of Maine. And there’s no indication that it will anytime soon. The latest effort to introduce a voucher-like subsidy for private schools died this year for lack of enough signatures to put the initiative on the state ballot. Earlier similar statewide initiatives lost by 2-1 margins.

But California does have an abundance of charter schools, serving about 1 in 10 students in the state. And critics of the Maine decision, Carson v. Makin, who include the three dissenting justices, are warning that charters could be drawn into the next skirmish involving competing interests: the First Amendment’s prohibition of government from fostering religion versus people’s right to express their religion without government interference.

“There will be efforts by those who want to create religious charter schools to claim that the denial of funding for them violates free exercise of religion,” predicted Erwin Chemerinsky, dean of the UC Berkeley School of Law.

Supreme Court Justice Stephen Breyer raised that prospect in his dissent in Carson v. Makin. But in oral arguments in the case, the lead attorney for the plaintiffs, two families from Maine, had called that prospect an “unwarranted concern.” Charter schools are public schools, and the Maine case dealt strictly with private schools. The circumstances are unrelated, he said.

But the rules have already changed in ways that seemed improbable not long ago, Justice Sonia Sotomayor wrote in a separate dissent. “In just a few years, the Court has upended constitutional doctrine, shifting from a rule that permits States to decline to fund religious organizations to one that requires States in many circumstances to subsidize religious indoctrination with taxpayer dollars,” she said.

Charter schools could offer another test, although it’s unclear where the Supreme Court will head next, Mark Joseph Stern, Slate’s senior writer covering courts, said on a Slate podcast. Chief Justice John Roberts no longer controls the other five conservatives on this and other issues, he said, foreshadowing the 6-3 decision on abortion a few days later. In it, Roberts voted with the others to uphold Mississippi’s abortion ban but, in a concurring opinion, disagreed with the five on overturning the larger right to abortion altogether.

Carson v. Makin was the third case in five years in which the court, with Roberts writing the majority decision, shifted the boundaries defining the separation between church and state.

In rural Maine, where towns were too small to afford their own high schools, the state paid the tuition to the private school of families’ choice. As Roberts noted in his opinion, the state didn’t impose restrictions on private high schools that were required of public schools. Private schools didn’t have to accept all who applied; they didn’t have to follow curricula that public schools adopted or give the state’s assessments.

As long as private schools were accredited, parents could send their children to them, and the state would pick up the tab. There was only one exception: the private high school could not be a religious school that “promotes a particular faith and presents academic material through the lens of that faith.”

A state doesn’t have to subsidize private education, Roberts said. But once it decides to do so, it cannot disqualify private schools solely because they are religious. “That is discrimination against religion,” in violation of the First Amendment’s right to express religious beliefs without government interference.

In his dissent, Breyer noted that in a 2017 decision that Roberts wrote, the court decided that it was appropriate in some instances for a government to extend a content-neutral public benefit to churches that are available to organizations and governments. But it’s one thing to pay for playground materials to make them safe for children, the issue in that earlier prior case, Trinity Lutheran Church v. Comer; “paying the salary of a religious teacher as part of a public school tuition program is a different matter,” he wrote.

Nothing in the First Amendment compelled Maine to underwrite religious schools; it was fully within its right to underwrite only nonsectarian public schools.

At Temple Academy, one of two schools that one plaintiff family wanted to attend, “the Bible is used in every subject that is taught.” Its teachers must identify as born-again Christians; that school and Bangor Christian Schools, the other school involved in the lawsuit, can deny admission based on sexual preference.

But in a twist, now that they’ve won the case, both Bangor Christian and Temple Academy announced they would likely not admit students under the state’s tuition law. As a UC Davis law school professor Aaron Tang explained in The New York Times, Maine’s Legislature, in anticipation of the Supreme Court’s verdict, revised state law to forbid discrimination based on gender identity and sexual orientation and extended the law to every private school, without regard to religious affiliation, that chooses to accept public funding.

Roberts acknowledged in the Maine decision that states may choose not to fund private schools and to require that their public schools be strictly secular. California doesn’t fund private schools, and, since voters passed a constitutional amendment 144 years ago, has been prohibited from funding religious schools.

Charter schools the next domino to fall?

California treats charter schools as public schools. They, too, must admit any student who applies. They must hire credentialed teachers and comply with discrimination laws, state standards and graduation requirements. And, under state law, “a charter school shall be nonsectarian in its programs, admission policies, employment practices and all other operations.”

But there is a key distinction between charters and district schools in California that provide a foot in the door for religious organizations. Charter schools are not overseen by elected officials; nonprofit boards of trustees create and run them. Some rent neighborhood churches; sometimes church officials helped start them.

So then, suppose a church, synagogue or mosque wanted to test California’s law and sought approval for a charter from their local school board. Suppose they agreed to comply fully with the state’s charter school law — open admissions, no religious instruction, no discrimination. Perhaps it planned to prohibit Gay-Straight Alliance clubs, ban “critical race theory” from social studies and “The Color Purple” from the school library — just as some rural and Orange County school districts are doing now under local control.

Would they be entitled to a charter?

“That would be a really interesting case,” Tang said. “Where the experience of a student in a church-run charter school is materially indistinguishable from any other charter school, a court might say there would be a free exercise of religion if a state denied funding because of the religious character of the organization operating the school.”

But, he added, if the charter school began engaging in religious instruction or wasn’t open to different faiths, “I’m quite confident that this court (the Roberts court) would allow a state to deny the charter application.”

Tang and Eric Premack, executive director of the Sacramento-based Charter Schools Development Center, agreed that nothing in the Maine decision would indicate the Supreme Court would require religious schools to be funded in California.  At least for now.

Premack, who helped draft California’s charter school law, said the Supreme Court would have to wipe out the First Amendment’s establishment clause, which creates a wall between church and state, for that to happen.

Others, though, are wondering if that’s already happened.

“Today, the Court leads us to a place where separation of church and state becomes a constitutional violation,” Sotomayor wrote in her dissent in Carson v. Makin.

“The Supreme Court took another major step toward obliterating the wall separating church and state,” Chemerinsky wrote in the Los Angeles Times.  “It is basically cutting the establishment clause out of the Constitution.”