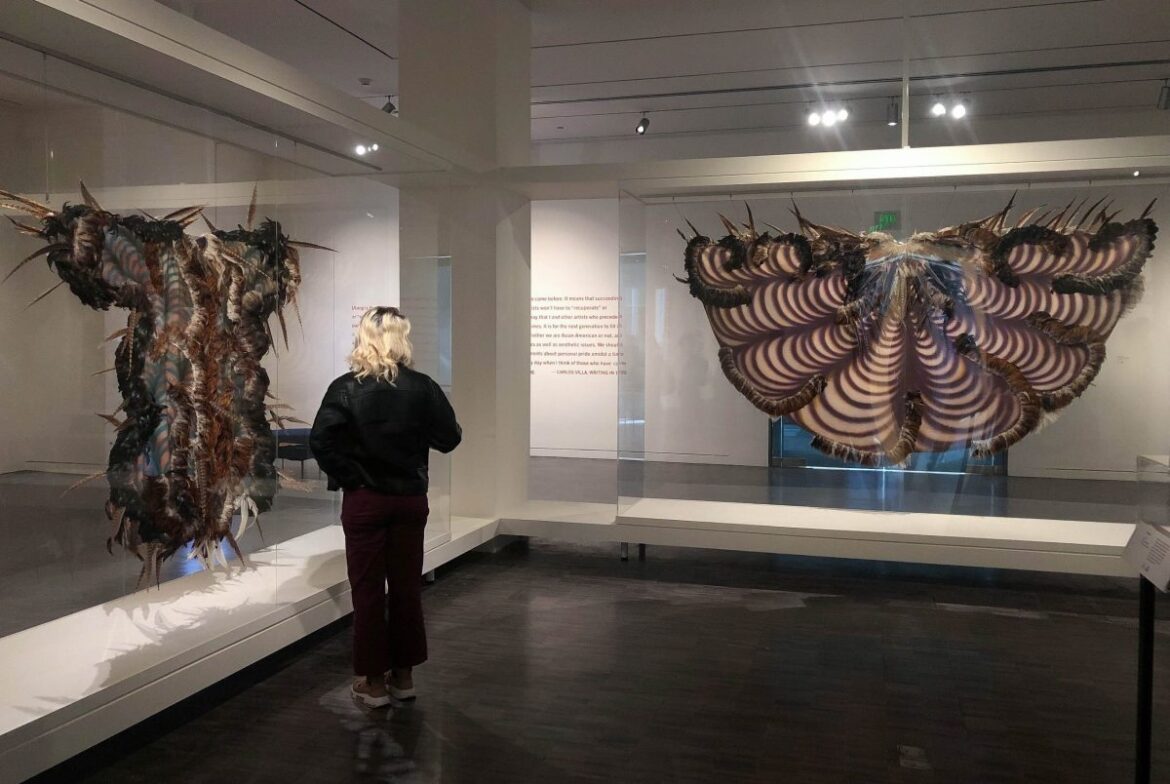 On the right, Carlos Villa's 1971 work "Painted Cloak (recto)" — made of unstretched canvas airbrushed with acrylic paint and lined with feathers and taffeta — greets visitors at the entrance to the "Worlds in Collision" exhibition at the Asian Art Museum, the first retrospective of a Filipino American artist at an American museum. (Rya Jetha/Bay City News)

It all began with electrical issues at a studio building in 2016 at the San Francisco Art Institute. Mark Johnson, a professor of art, crawled into the attic to check the wires.

“The place was full of rolls of canvases. I said, ‘What the heck is this? Who’s been in this crawl space?’,” Johnson recalled.

Johnson had stumbled across 15 works of the iconic San Francisco-born Filipino American artist Carlos Villa, whom Johnson had shared the space with until 2013, when Villa passed away.

“That is the beginning of this exhibition,” Johnson said, referring to the Asian Art Museum’s new retrospective of Villa that he and Trisha Lagaso Goldberg have co-curated.

“Worlds in Collision,” which opened Friday, celebrates Villa’s work and influence as a teacher, curator, artist and activist in San Francisco. The exhibition explores Villa’s vibrant aesthetic that brought him acclaim in the 1970s, including large installations with feathers, blood, bones, and tattoos.

The retrospective has the distinction of being the first major exhibition of the work of a Filipino American artist at an American museum, and the Asian Art Museum’s first retrospective devoted to a local artist. The show aligns perfectly with the museum’s recent decision to change its mission, director and CEO of the museum Jay Xu explained at an exhibition preview.

“We redefined the mission of the Asian Art Museum, which traditionally was to be a world leader in promoting understanding and appreciation of Asian art and culture. Now we’ve added an equally important dimension — that is Asian American art and culture,” Xu said.

Born to Filipino immigrants to the United States in 1936, Villa was raised in the Tenderloin and Richmond districts of San Francisco. Villa enrolled at the San Francisco Art Institute (then called the California School of Fine Arts) and received his M.F.A. from Mills College in 1962.

Upon graduating, Villa moved to New York, where he fully embraced Minimalism in his artwork until 1969, when San Francisco lured him back.

“Carlos told me that he thought his mature work started when he came back to San Francisco because he gave up his goal of being a minimalist, reductive artist,” Johnson said.

“He wanted to come back to San Francisco at the height of Third World Liberation Front consciousness to rewrite curriculum and reinvent American art history.”

“Worlds in Collision” showcases Villa’s work from the ensuing period when he immersed himself in his Filipino American identity and experimented with indigenous practices from Africa, Oceania and the Americas. The title of the exhibition — “Worlds in Collision” — is borrowed from a course Villa taught at San Francisco Art Institute, where he taught for more than 40 years, that aimed to decolonize art history, erase distinctions between high and low art, and champion artists of color.

Another gallery in the Asian Art Museum displays Villa’s influence as a teacher and mentor, while a companion exhibition also opened this week at the San Francisco Arts Commission Main Gallery, featuring work from Villa’s later life.

Villa has long been known as an “artist’s artist” who paved the way for the next generation of Asian American creators. Villa self-consciously built an artistic foundation so that those who followed him “won’t have to recuperate or reinvent themselves in the same way that I and other artist who preceded them have had to do.”