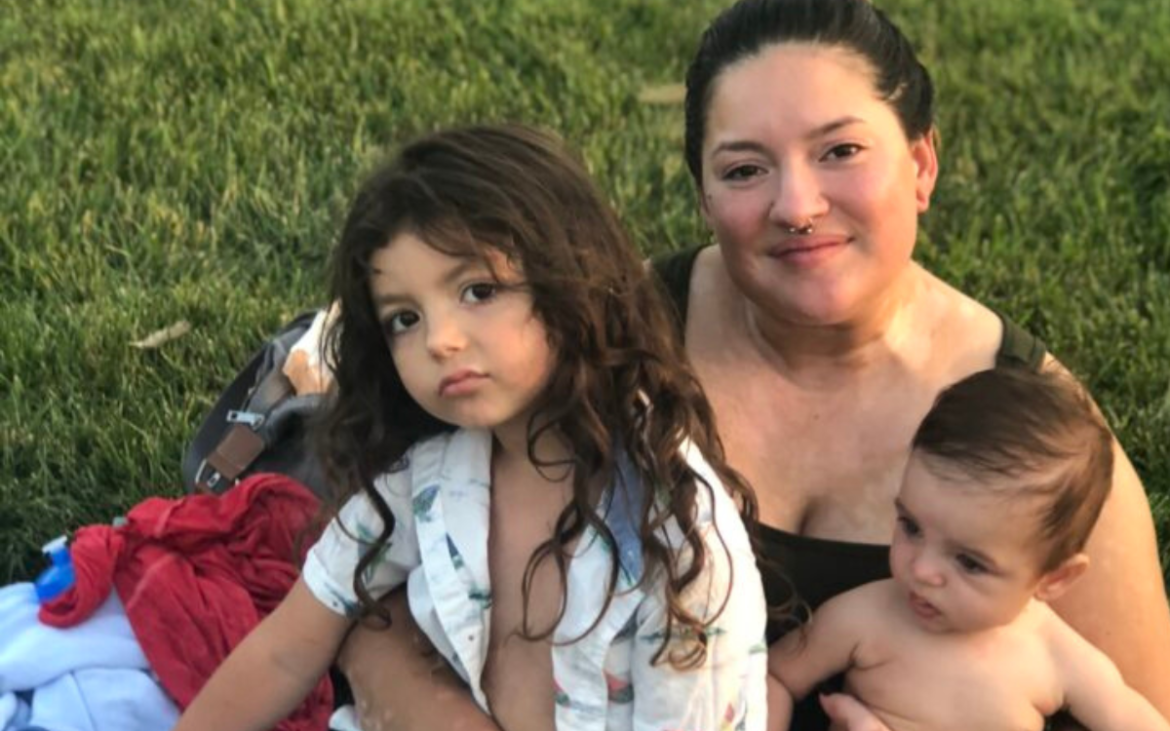 Elizabeth Clews is a recent graduate of Ventura College and will soon transfer to a four-year university — if she can secure year-round housing for her two young children and herself. (CREDIT: COURTESY OF ELIZABETH CLEWS)

Seven years after she first enrolled at her local community college, amid multiple moves between her car and motel rooms plus countless waitressing hours, Elizabeth Clews is finally celebrating graduating with her associate degree in history.

A former foster youth who has constantly faced homelessness, she has remained determined to continue her education and become a teacher after transferring to a university in the fall while caring for her children, ages 4 and 8.

But Clews continues facing what has become a consistent challenge among students with backgrounds like hers: securing stable housing all year. Housing for her and her two children has become the greatest deciding factor in where she decides to transfer to complete her bachelor’s degree.

“It is very significant that it took me seven years to complete community college,” said Clews, who graduated last month from Ventura College in central California.

“And while there are many reasons for that, I would say that the biggest reason that it took me that long to obtain a two-year degree is because of housing insecurity.”

Many California schools have long offered on-campus housing year-round for their students, whether they be student-athletes, previous foster youth, international students or just students who may not want to leave their college town during the summer and winter breaks. But missing from that list at most schools is housing all year for students with children.

Despite the varied, and often limited, offerings for family student housing, there are thousands of student parents in California.

“The primary challenge we face with family housing is having enough supply,” said Jeff Cooper, director of student housing and residential life at Cal State Monterey Bay. “Additionally, students with families have different needs and expectations from our ‘traditional’ students. We work to meet these differences by locating family housing in areas that have playgrounds, gathering spaces, and offering contract terms that support their need to place their dependents in local school systems, as applicable.”

Being a full-time student makes scratching together money for rent difficult, leading many students to opt for discounted student housing when it’s available. But even if a campus offers housing, it isn’t always an option for all students, as it is rarely designed to accommodate families, and many colleges don’t allow children in their on-campus housing, or even in their emergency housing programs for homeless students.

Some schools, such as Cal State Monterey Bay, Cal State Northridge, and the majority of campuses within the University of California system have offered family student housing for years.

At the Monterey Bay campus, over 100 families live on campus each year, and the demand has grown in recent years.

At the University of California Berkeley, there is a student-family housing complex that is made up of 974 unfurnished apartments, which includes a mix of one-, two- and three-bedroom apartments.

“We hear from all students, but mostly student parents and international students are the ones who need year-round or winter break housing,” said Adam M. Ratliff, Berkeley’s assistant director of media relations and critical communications.

Some campuses that do not have family student housing are seeing growing demand, university officials reported in an EdSource survey.

Cal Poly Humboldt, for example, is in the process of developing a plan to offer family housing, according to Grant Scott-Goforth, a spokesperson for the school. The school received at least 10 requests for family student housing during the 2021-22 school year, a number they have seen increase annually.

Cal Poly Humboldt is one of the universities where Clews was accepted for the fall semester. She would be one of the students who would benefit from family student housing. Not only did Humboldt offer her admission, but the staff was especially helpful to try to identify off-campus housing for Clews and her children. She isn’t sure that the situation will work out, however, leaving her stressed at a time when she would rather be celebrating her newly achieved education milestones.

Cal State East Bay received one request in the last school year, after which they hired a consultant to “look at student, family, faculty and staff housing feasibility,” said Mark Almeida, associate vice president of student affairs and auxiliary services.

Other schools report not seeing any demand for such housing options, while others report not having the capacity to expand housing to include families.

“Family housing is complex; families can include small children, adult children and even the elderly and disabled,” said Rosalee Rush, senior associate vice president of communications and public affairs at Stanislaus State. “Each population has unique needs to consider that may differ from the traditional students we have historically served.”

Some staff at the school are currently discussing how and when they might be able to offer family student housing after receiving at least four requests for emergency housing by students with families.

California has policies to support students with backgrounds like Clews’: students who have been foster youth or homeless qualify for priority access to dorms or other on-campus housing.

Plus, state policy proposals such as Assembly Bill 1746, which was authored by Assemblymembers Jose Medina, Kevin McCarty, and state Sen. Connie Leyva, would increase the number of student parents who have access to financial aid from the state. After passing the Assembly unanimously last month, the bill was most recently referred to the Senate Committee on Education.

And federal bills like the Higher Education Access and Success for Homeless and Foster Youth Act of 2022 would change inconsistencies across campuses with requirements specific to homeless and former foster youth including prioritizing on-campus housing during and between academic terms and designating liaisons at each campus.

Congress has yet to act on the bill sponsored by Sens. Patty Murray, D-Wash., and Rob Portman, R-Ohio, and Reps. Katherine Clark, D-Mass., and Don Young, R-Alaska, which was introduced earlier this year.

Clews might soon find relief in her education journey, as she is waiting to hear if there might be space available for family student housing at UC Santa Cruz, her top school because of the housing security it can offer.

If space is no longer available, she will attend Cal Poly Humboldt hoping she can end up with housing in the community that allows her to plan the logistics around her kids’ schooling in addition to her own. The university doesn’t yet have that kind of infrastructure for student parents.

The housing uncertainty is draining, but she is determined to become a teacher. Her greatest hope is that she can attend school while caring for her children without needing to worry about where they will live at any point of the school year.