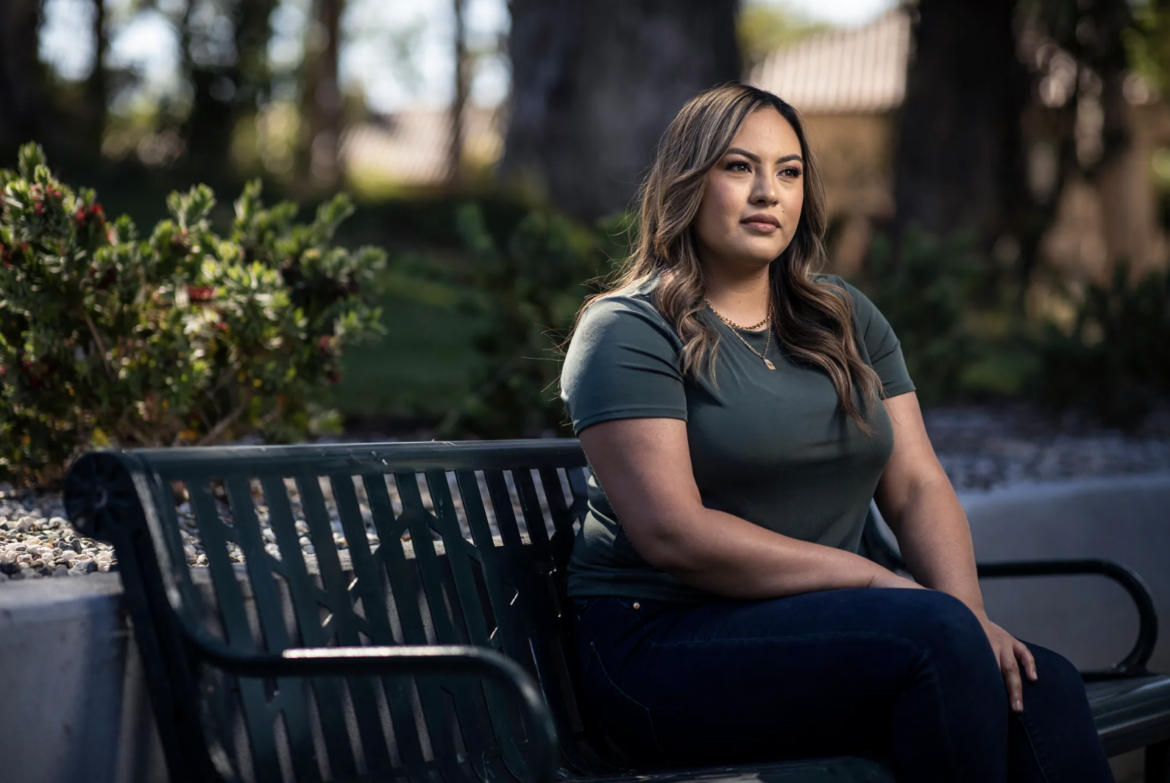 Yvonne Vigil-Calderon, a student at Touro University California, has dealt with burnout throughout the pandemic. She is photographed on the Vallejo campus on May 25, 2022. Photo by Martin do Nascimento, CalMatters

Yvonne Vigil-Calderon, an osteopathic medicine student at Touro University California, went to the doctor earlier this year with such severe exhaustion that she thought she was anemic.

Her lab results came back normal.

“‘When was the last time you took a day off?’” her doctor asked. She realized she hadn’t taken time off all semester.

Hours of online classes were draining. Pandemic restrictions meant Vigil-Calderon didn’t get to know many other students, outside of those who she teamed up with in classes. Her grandmother had died of COVID-19 early in the pandemic, and it was difficult to return to school and study for exams while grieving. She hadn’t realized it, but the deep fatigue she felt was actually burnout.

Vigil-Calderon is among many medical students and health care workers who have dealt with burnout during the COVID-19 pandemic. Two private universities in California, Touro and Oakland’s Samuel Merritt University, hope to help. They received three-year federal grants —  worth $2 million at Samuel Merritt and about $1.6 million at Touro — to create burnout-prevention programs, part of a $103 million nationwide effort to retain more health care workers.

Solutions are urgently needed: The U.S. is projected to face a shortage of as many as 139,000 physicians by 2033, particularly in primary care, according to the Association of American Medical Colleges.

Long-standing nursing shortages have also worsened. Scripps Health, which has hospitals and clinics in the San Diego area, told CalMatters in August that nursing vacancies had gone up 96% in the previous two years.

One in five physicians and two in five nurses said in 2020 that they intended to leave their jobs, according to a Mayo Clinic Proceedings survey.

Addressing the sources of burnout among health care workers should be a “top national priority,” Surgeon General Vivek Murthy said in an advisory late last month.

“A lot of us don’t realize that we’re burned out because when you’re in a career path that is so emotionally and physically demanding on you, you just dedicate all your time to it,” said Vigil-Calderon, who just finished her second year at Touro.

Children’s Hospital Los Angeles was the other institution in California to receive the Health Resources and Services Administration grant, along with about 30 other organizations nationwide.

Weekly, online movement classes covering exercises such as yoga, balance, and abdominal strength are among the program’s offerings.

It’s easy to get caught up in a busy day, spend too much time in front of a computer, and avoid working out. But exercise is key to managing anxiety and stress, said Linda Kendig, an administrative coordinator in the nursing school’s case management program, who is leading the class.

For students who are regularly feeling stressed and overwhelmed, Kendig said she hopes to remind them that these exercise habits can be their norm.

“You’re in the medical field, of course there’s a lot of stress. But you’re not going to be good to anybody unless you’re good to yourself,” Kendig said.

Touro is creating a “train the trainer model” with its funding, said Steven Jacobson, the university’s dean of student affairs. The university will hire students to be peer educators and train them to cope with a range of stressors that could affect both them and their patients.

So far this spring, the university has trained nine students as peer mentors in trauma-informed care and support for LGBTQ+ people. The goal is to have 23 peer educators trained by next fall, Jacobson said.

Those students will then train other students — as many as 500 a year, Jacobson said. Students who participate will receive a certification, known as a micro-credential.

​​”Ultimately, we want them to be able to have the knowledge and information before they go into the profession so they know how to: one, take care of themselves; number two, how to care for their patients; and number three, how to prevent future burnout,” Jacobson said.

Touro will also use the funds to hire a wellness coach and an additional counselor, and create a food bank at the university.

Helping students build resiliency and providing safe spaces for underrepresented students are among the recommended ways medical schools can support them and reduce burnout, according to a May advisory from the surgeon general.

Avleen Gill, a third-year student at Touro, hopes to train as a peer educator in the fall, and is particularly interested in learning more about suicide prevention and trauma-informed care.

Learning those skills will help students become well-rounded physicians and make their patients feel safe, said Gill, who is pursuing a doctorate in osteopathic medicine and a master’s in public health.

“I think these are things that some of us who come from a privileged background don’t realize — that other individuals might face insecurities and might face challenges,” Gill said. “It’s very humbling to sit down and listen and interact with students and talk about these touchy subjects in a very safe space.“

Samuel Merritt is also partnering with the nonprofit Brighter Beginnings, which has health clinics in Richmond and Antioch. The clinics serve many patients who don’t have insurance, said Wendy Escamilla, the director.

The university is hosting workshops on self-care tactics for the clinic’s staff and providers. There are also self-care themed art projects: Staff at the clinic’s Richmond location are going to paint a mural, Escamilla said.

The clinic dealt with provider shortages throughout the pandemic. Escamilla also said that she has seen more burnout among staff members, many of whom juggled work, caring for sick family members, and teaching their children at home.

Escamilla said it’s important that medical students understand the stressful environment they are heading into. When she interviews job candidates, she regularly asks them about their own self-care habits.

“I tell them, ‘It’s super important,’” Escamilla said. “Because you have to learn to manage your personal life and work. And we talk about that.”

For too long, medical professionals have been taught to “take who we are and make it a very quiet aspect of our presentation when we’re providing care,” said Martinez-Hollingsworth, who studies the impact of burnout on providers and patients of color living with chronic illness.

But the pandemic made that impossible for some. Providers of color were caring for patients of color who were often getting sicker and dying at higher rates than white patients.

Black physicians and physicians who identify as two or more races reported the highest rates of burnout due to COVID-19, according to a 2020 survey from the American Medical Association.

“We have to stop pretending like there are two buckets of people, and one is the patients and the other is the provider,” Martinez-Hollingsworth said. “We really need to critically shift our brains and think about how we, at some point in our lives, are going to be the patient.”

DuBose-Morris is a fellow with the CalMatters College Journalism Network, a collaboration between CalMatters and student journalists from across California. Murphy is the Network’s private colleges team leader. This story and other higher education coverage are supported by the College Futures Foundation.