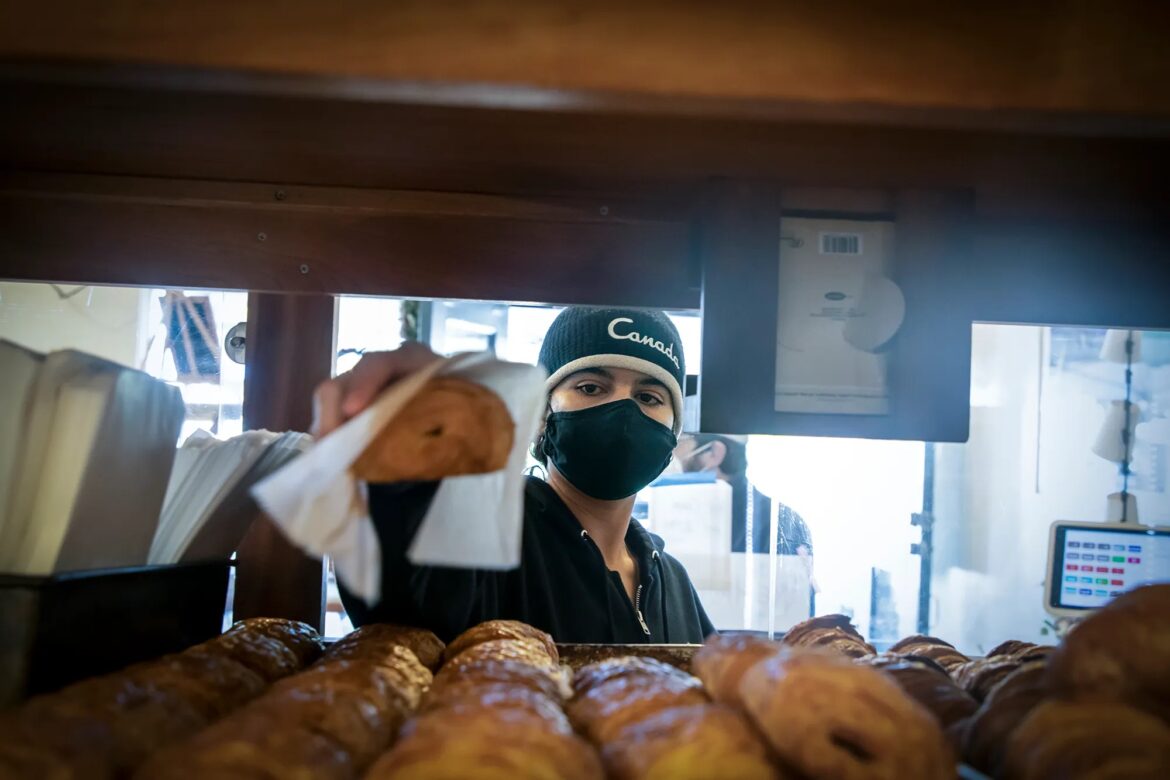 Luna Walker bags chocolate croissants for patrons at Nabolom Bakery in Berkeley on Jan. 19, 2022. Photo by Martin do Nascimento, CalMatters

As California emerges from the pandemic, the state’s workers are slowly recovering after hundreds of thousands of them left their jobs last year.

Fed up and burnt out, workers quit or changed jobs in droves in search of better pay, benefits or workplace conditions, part of what many are calling the “great reshuffling” across the state and country.

A panel of experts Wednesday said the reshuffling of jobs has produced “mixed signals” in California’s economic recovery. They said many workers had switched jobs but stayed within the same sectors, often gaining higher wages, yet job openings and resignations remain at historically high levels.

CalMatters Reporter Grace Gedye moderated a discussion hosted by the Milken Institute and CalMatters about California’s economic recovery from the pandemic.

Irena Asmundson, a researcher at the Stanford Institute for Economic Policy;  Natalie Palugyai, Secretary of the California Labor & Workforce Development Agency; Sarah Bohn, vice president and chair in policy research at the Public Policy Institute of California; and Rachel Michelin, president of the California Retailers Association, described the impact the “great reshuffling” is having on workers, employers and the state.

And they discussed how California could maintain its reputation for a growing, productive workforce and stave off a potential recession.

As the economy recovers, the “great resignation” is more like a “great reshuffling,” with workers changing jobs within the same industry, said Bohn. With demand for workers on the rise, wages have increased an average of about $4 per hour, she said, but with inflation it doesn’t feel like a raise and for some it may feel more like a pay cut.

They also boosted worker pay, she added, alluding to some warehouse and distribution center jobs that pay $23 an hour. She said businesses also invested in worker training and education.

The panelists said that most of the workers who changed jobs were not highly educated and held lower-paying positions in construction, warehouses, and retail.

With a potential recession on the horizon, the panelists said California’s growth may be at risk.

Bohn said that while that state has been in “a unique period of budget surplus,” employers’ efforts to draw in workers with better pay, flexibility and increased training could be at risk.

Asmundson warned of structural faults in the economy. She used, as an example, disparities in taxes people pay for homes because of California’s Proposition 13, which capped property tax increases.

Some panelists warned that many workers can’t afford housing because their take-home pay doesn’t cover it. Add to that inflation and federal efforts to raise interest rates.

A long road ahead for permanent change

The experts were uncertain wage and benefits gains in the reshuffling are here to stay without some broader worker protections in place, especially for low-income earners.

Palugyai said it’s hard to quantify the impact of the great reshuffling as an overall net good or bad.

“A lot of this reshuffling is causing marginal changes for workers,” she said. “A dollar or two here and there — it’s not getting what these workers need long term to grow.”

The last two years have been a wake-up call to employers to improve workplace conditions and training opportunities, she said, and to listen to workers as thousands across the country attempt to unionize.

Asmundson said that one of the biggest lessons learned in the pandemic was the importance of equity in housing, work and beyond. She pointed to the state’s falling population rates and the concentration of homeownership among older, white, retired Californians.

“There’s already this jobs and housing imbalance,” she says, “so we have to fix that issue by all working together.”