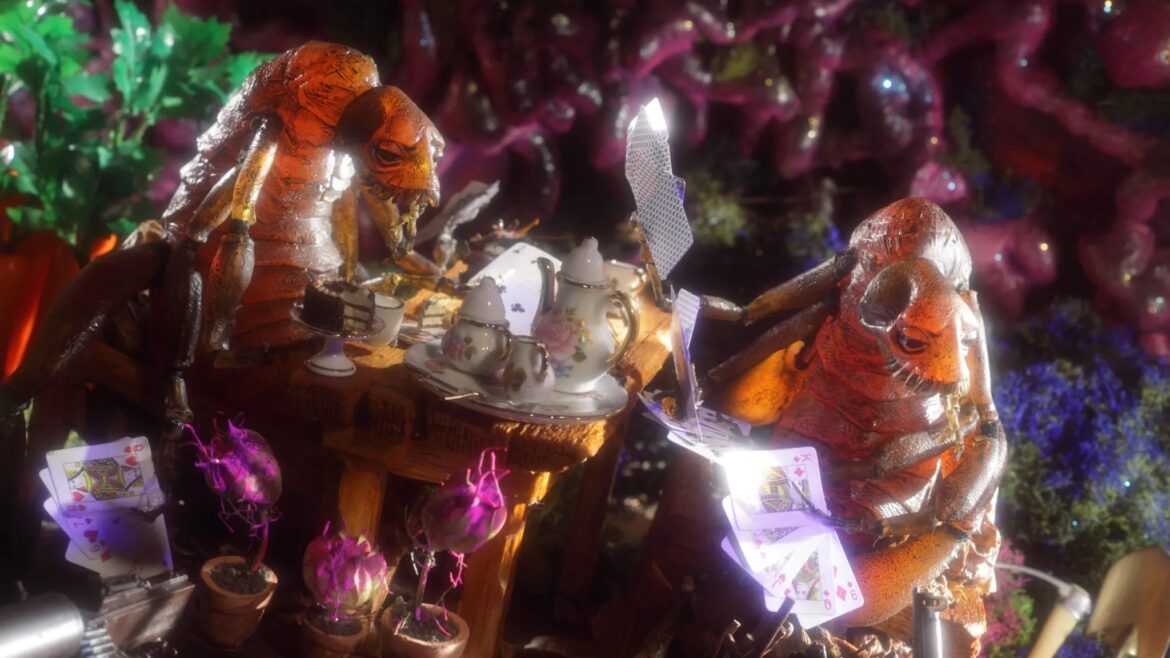 Two orange bugs sit down for a game of cards and tea in a scene from "Mad God." Tippett's film, which took 30 years to finish, was finally completed in 2021.

The immersive and mature experience opened at the Roxie Theater in San Francisco on Friday. Tippett plans to attend one screening but it’s already sold out. “Mad God” is also available to stream on the horror streaming service Shudder.

The 70-year-old Berkeley native, resident and owner of Berkeley’s Tippett Studio remains one of the most respected and influential animators ever. He’s seen a lot, and talks frankly about his career and Hollywood.

Some of his most famous creations are seared into collective cinematic memory banks: the animated chess pieces in the first round of “Star Wars” films, some of the dinosaur effects in Steven Spielberg’s original “Jurassic Park,” “RoboCop’s” villain ED-209 and those savage, bloodthirsty bugs that preyed on unlucky soldiers in “Starship Troopers.” These are but a few.

Tippett won two Oscars, an Emmy and was nominated, awarded and referenced numerous times. In 2019, a documentary about him — “Phil Tippett: Mad Dreams and Monsters” — released.

“Mad God” remained in Tippett’s creative mind for awhile, ever since he wrapped on 1990’s “RoboCop 2.” The crew chipped in at the launch of his grand vision.

“I shot about 3 minutes of material and then lost the crew to ‘Nightmare Before Christmas,’’ he recalls. “And you know it was too big in scope to do, so I put it on ice but I never let it go … For the next 30 years, I just kept thinking about it — doing storyboards — and when I was on location for other movies on the weekends I would study Jung and Freud and Milton and Dante … all this stuff that is in the ‘Mad Dog’ soup.”

“It would be a cold day in hell before any studio would do it,” he said. “I couldn’t pitch it and I wouldn’t want to because of the state of the world of nonsense that is the world of so-called content, which is just the world of hot air.”

“Francis (Ford) Coppola has his 30-year-old dream project and is selling off his property and is going to do it himself,” he adds. “Because there’s no point in having this bureaucracy that all they do is to tell you how to mess things up.”

He’s pleased with the support from his fans and says “the hope was that if you build a better mousetrap the world will be a path to your door.” He points to collaborations with Dutch director Paul Verhoeven — who gave audiences provocative fare such as “Basic Instinct,” “Showgirls,” “RoboCop,” “Elle,” and many others — for being a pivotal mentor in his career.

“In terms of his [Verhoeven’s] artistic view of cinema as opposed to other commercial, more commercially oriented (directors) like Lucas, Spielberg,” Tippett said.

He adds: “Paul didn’t care if he flamed out. His intention was to make things that were unique, not to say that ‘Jurassic’ and ‘Star Wars’ weren’t unique but many of the unique qualities of those spectacles were the result of changes in technology, and those movies couldn’t have been made without motion control or computer graphics…”

While stop-motion animation isn’t as commonplace in movies as it once was, Tippett prefers that painstaking process.

What he didn’t foresee from the start was finding a major studio to back it.

“I don’t think computer graphics look real and I never approached computer graphics, particularly in character design or such, as real,” he said. “You always made things hyper real, and dramatic … because it’s never gonna be real. But if it’s unexpected then you’ve got them. It creates the illusion of reality. I always thought of computer graphics as a three-dimensional cartoon.”

While he doesn’t like to reflect on projects he’s been associated with in the past and their ensuing sequels, including the new “Jurassic World: Dominion” — “My car has no rearview mirror,” Tippett said — he later reveals he’s impressed with the work of the indie wunderkind Robert Eggers, director of “The Witch,” “The Lighthouse,” and most recently “The Northman.”

“Bob Eggers is just a terrific filmmaker and (‘The Northman’) is a new high-water mark for me. I can’t think of anything else that really excited me as much.”

Audiences, particularly Tippett’s fans, will be excited about picking through and figuring out all the influential ingredients tossed into “Mad God’s” broth.

“It was all very much inspired by so many things,” he said. “I tried to make a list the other day and it was like wow everything but the kitchen sink … One significant thing was when I was in my teens when Bob Dylan did turn to electric and was doing more of those collage poetic pieces … that really was eye-opening for me as a way to poetically putting together this collage …”

And then adding more than a dash of the stark vision created from others such as Bosch.

“That was what I was going for: that horrible whimsy, I guess,” Tippett said.