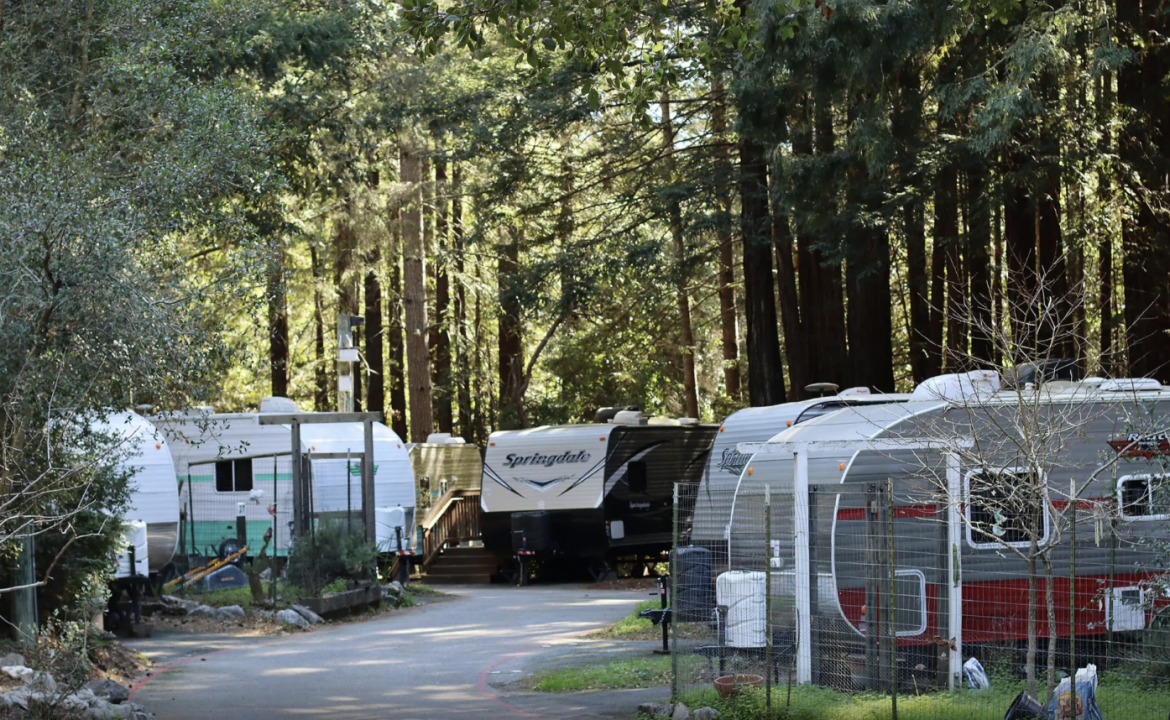 When Dmitrius Rodriguez, 23, was admitted to UC Santa Cruz as a transfer student, he knew he would not be able to afford his education if he couldn’t secure housing in the university’s camper park.

“I myself have experienced the volatility of the housing market. I was born and raised in the Bay Area. It’s pretty hard out there, and going to Santa Cruz, it’s not that much easier,” Rodriguez said.

By the time he transferred in 2020, Rodriguez had attended five different community colleges, working and saving for almost five years so that he could enroll in UCSC’s environmental studies and economics program. It was his dream, one that he hoped would set him up for a career in environmental activism. But he also knew that dream would be unattainable if he couldn’t drop his rent to under $1,000 a month.

For a time, Rodriguez had lived with his mom, but two years ago she moved to Nevada. She had been priced out of the Bay Area.

After he was accepted, Rodriguez spent the summer in on-campus housing, managing to get one of the 42 spots in the university’s trailer park. The trailers are single occupancy, with water tanks for the kitchen, but mostly without bathroom or sewer connections. The university provides portable electric heaters and nearby bathroom and shower facilities.

For this, Rodriguez pays around $750 a month, well below the $1,306 to $4,000 a student can expect to pay for a room on campus and significantly less than the $3,000 median rental prices of surrounding Santa Cruz.

Rodriguez is one of the lucky ones. In 2021, 9 percent of students reported experiencing homelessness, the highest among UC schools. Though the university houses more students than any other University of California school, UCSC guarantees housing for just half of its undergraduate students.

And the challenge to secure affordable housing is likely only to worsen. From 2010 to 2020, the population on the UC Santa Cruz campus grew 20 percent, census data shows. That’s the highest relative amount of growth compared to other tracts within the county. At the same time, housing costs have continued to grow. According to the real estate site Zillow, Santa Cruz home prices increased by 24 percent in the past year alone, surpassing housing price rises in both neighboring San Jose and San Francisco.

Rodriguez is trying to help others. He’s the Director of Finance for Slug Shelter, a student-led organization looking to acquire a property to house students who find themselves temporarily homeless.

Similarly, when Zennon Ulyate-Crow moved from LA, he was overwhelmed by students’ stories about experiencing homelessness, struggling to find places to live. Ulyate-Crow, a first-year political science major, was motivated to act.

“They’re just scrolling through Reddit and seeing the countless people posting two days before school starts. ‘Oh my god, I need a house. Please help me.’ It’s just heartbreaking,” Ulyate-Crow said. “And so out of that the Student Housing Coalition was born. There was a lot of desire to do something about it.”

UCSC is not the only university struggling to house its students. On March 3, the Supreme Court ruled to cap enrollment at UC-Berkeley, freezing student admissions, following legal battles with Save Berkeley’s Neighborhoods, a resident group that accused the university of failing to provide sufficient on-campus housing. The university will have to cut fall in-person enrollment by 3,050.

UC Santa Cruz only has plans to keep growing, increasing the number of students from 18,600 to 28,000 students by 2040. To accommodate this, the university hopes to build housing for 8,500 more students.

The school is doing everything it can to expand housing opportunities for its students, said Scott Hernandez-Jason, UC Santa Cruz’s executive director of communications and marketing. Among the university’s plans for expansion is the Housing West project, a plan stymied by lawsuits and one that some locals, faculty, and students alike have resisted.

“If it had not been sued, we would have completed the first phase of that project and been well into the second phase by this point,” Hernandez-Jason said.

“It’s deeply disappointing to see that happen to a project that is so badly needed by our students and our community.”

Fighting back against the university is not something James Clifford would have predicted for his life. Yet the retired UCSC professor is part of the East Meadow Action Committee, fighting to preserve the East Meadows – the fields in front of the university – from being filled in with dorm construction.

Clifford points to the university’s original mandate to preserve the surrounding landscape. The proposed complex will reportedly use around a third of the East Meadow land yet fill less than 5 percent of the proposed new housing.

For Clifford, this is the first time he – or many of his colleagues in the action committee – have engaged in such an operation. Clifford taught at UCSC from 1978 to 2010, joining the faculty just a little over a decade after the university was founded in 1965. He lives on the outskirts of the 2,000-acre campus and often rides his bike across the university’s sprawling grounds, passing through the pockets of colleges tucked under the towering redwood trees.

“You don’t have almost 20,000 students in a place like that without changing things,” Clifford said. “But the changes have been done, until now, carefully and responsibly.”

The East Meadow construction, however, was different. “[The university] did it essentially secretly and in a rush without telling anyone,” Clifford said. “It was just too much for us. And so we opposed it.”

In early February, Santa Cruz County Superior Court announced that the committee’s most recent appeal of a ruling allowing the development had been rejected, concluding two years’ of litigation. Clifford described the decision as “disappointing.”

But for the Ulyate-Crow’s Student Housing Coalition, the East Meadow was just their latest victory. At the end of last month, the Santa Cruz City Council approved a plan to build a 233-unit apartment complex on 130 Center Street, after Santa Cruz Tomorrow, a local affordable housing group, appealed the project in November. The Coalition mobilized over 125 people to send over 1,000 letters to the City Council in support of the plan, Ulyate-Crow said.

The Coalition wants to establish a shared responsibility model, one where both the city and the university collaborate to ensure housing for the students.

That model may be hard to achieve. Gillian Greensite, a Santa Cruz local who heads Santa Cruz Tomorrow, says there’s a disconnect with the UCSC student housing coalition. The 1,000 letters to the City Council, most of which she claimed were automated, scared her.

“I value the university,” she said. “But I value the small-town funky nature of Santa Cruz, the little business and their little buildings.”

But at this point, other issues are more important, said Ulyate-Crow of the Student Housing Coalition.

“When we don’t build 50 new homes downtown in an apartment complex, those 50 people that we were going to move into those 50 homes don’t go ‘poof’ and disappear,” he said. “They go somewhere else.”

This summer, Rodriguez has been accepted to do research at the university. He can’t stay in the trailers over the summer. He plans to live out of his car. But he’s relieved. At least his car is small enough that he won’t be subject to the newly-implemented oversized vehicle ordinance. Last October, the Santa Cruz Council approved an ordinance 5-2 that 20 feet or longer vehicles would be banned from parking in the city overnight without a permit. Residential permits only last three days.

Rodriguez is optimistic that things will change. Students are angry, he said, and disappointed.

“Students are mobilizing, so hopefully the cycle of violence will end,” he said.