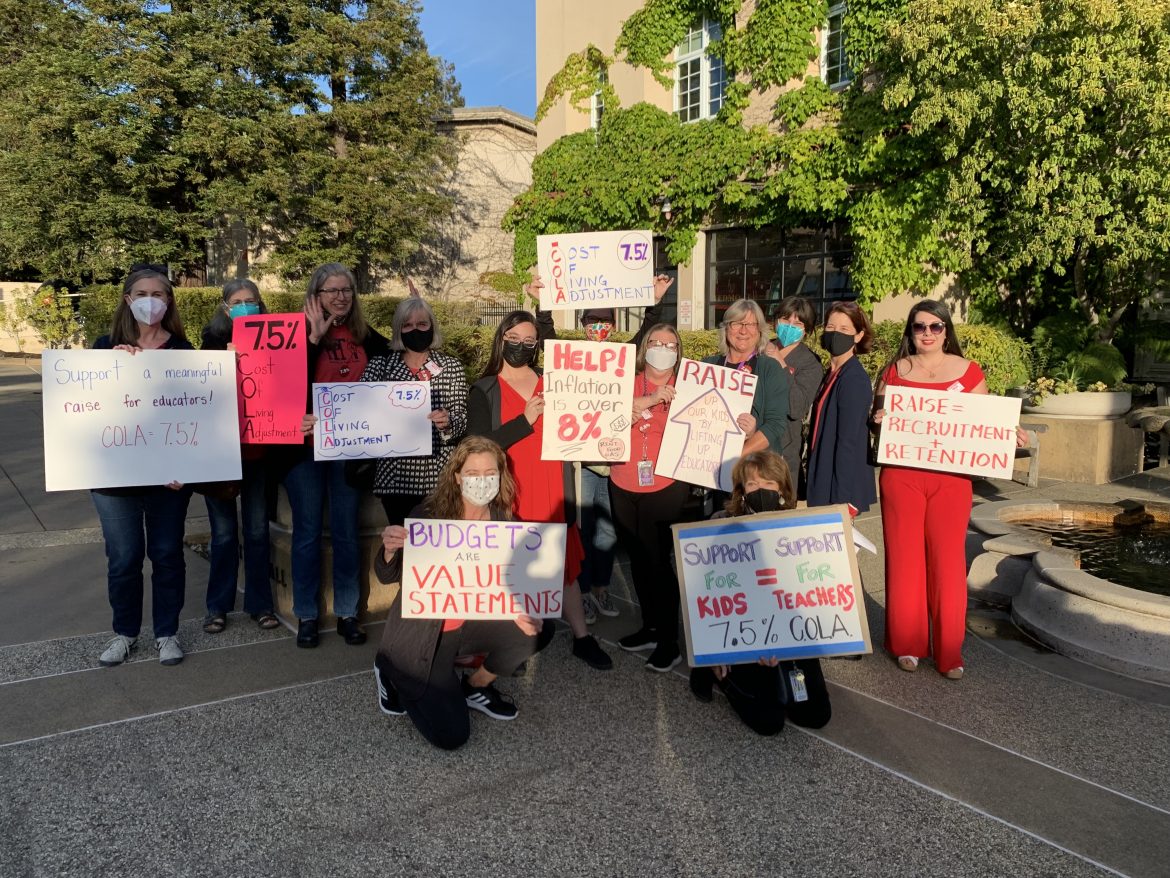 Teachers advocating for a COLA increase shared personal stories of hardship at Wednesday's school board meeting.

Teachers showed up in force at the May 11 Board of Education meeting to petition the school board for a 7.5% raise. saying inflation is putting pressure on already financially strapped educators. The cost of living adjustment (COLA) is necessary, they told trustees, if the district wants to attract and retain teachers.

The Board heard personal stories from teachers new to the district and others recently retired.

“We have a truly desperate need for a wage increase,” APT President Elise Marks told the Board. “We understand the district doesn’t have unlimited funds. This year, inflation is over 8%. But if teacher salaries continue to shrink against inflation, we are effectively being asked to take yearly pay cuts and to subsidize other district priorities. For many teachers, it is becoming impossible to stay.” According to Marks, one colleague has lamented “I love teaching and my students, but am looking to move out of the area, or maybe retire.” She told the board that multiple candidates for openings have cancelled their interviews when they have seen the salaries offered by PUSD. (View full statement from Marks below.*)

Thirteen educators from across the district — including para-educators, new hires, longtime and recently retired teachers — gave personal, sometimes emotional, testimonies to illustrate the financial hardships facing teachers right now. Housing challenges topped the list — young and old teachers struggling with high rents in Oakland — and one speaker asked that Piedmont consider offering affordable housing for teaching staff as a way to keep and retain teachers. A para-educator told the Board that several colleagues have banded together to visit a food bank regularly because it’s the only way they can make ends meet right now.

Others noted that for some teachers, living and working in Piedmont was only possible if they were subsidized by a spouse’s higher salary. For single parents who are also teachers, they said it means working more than one job.

(You can view their statements on the KCOM recording of the meeting HERE.)

“We recognize that appreciation is not enough,” said School Board President Cory Smegal. “We hear you.” She said the district was waiting on the state’s May budget revision numbers before finalizing the budget.

On Friday, May 13, the Governor released his spending plan. How it will affect PUSD remains to be seen.

From CalMatters “California’s $100 billion surplus: What to know about Newsom’s spending plan”:

Speaking for more than two hours in a press conference in Sacramento, Newsom unveiled his latest record spending proposal for the coming fiscal year. Riding a superheating economy and drawing disproportionately from the state’s highest earners, the state is now projected to have a surplus bigger than California — or any state — has ever had, and significantly more than the $76 billion that the governor predicted in January.

Roughly half of the surplus is required by law to be spent on education. That leaves “only” roughly $49 billion in discretionary money, and the governor wants to reserve 99% of that for one-time spending:$18.1 billion to provide financial relief for Californians buffeted by inflation, plus $37 billion for infrastructure investments, including $5.6 billion for education facility upgrades, and an extra $2.3 billion for the ongoing fight against COVID-19.

“The second topic I need to bring up tonight is an even harder one to talk about.

You will be hearing from several more teachers a bit later tonight on this same theme, one which is deeply painful for us to have to discuss in public.

And that is our financial situation after years of having our wages decline consistently against inflation, and our desperate need for a genuinely liveable wage.

California has a record budget surplus this year, and the Governor’s proposed budget promises record funding for public schools. We are all awaiting the May Revision of that budget, and hoping for even better news than we’ve had thus far.

However, in the latest PUSD budget projections–which do not yet reflect the May Revise–there is no money allotted for a cost of living adjustment for school staff. Zero. As we always are, we are asked to wait–and hope–that there will be something for us in the end. In my 20+ years in this district, that number has all too often been 2% or 1% or 0%. With the exception of one single year, our raise has never kept pace with inflation, and this year inflation is over 8%.

APT has been quite public about our ask for a 7.5% raise for the 2022-23 school year–which is not even enough to keep pace with inflation, but would at least help us keep our heads above water.

We understand that the District does not have unlimited funds. We understand that the District has many budgetary priorities beyond staff salary, and many of those priorities are laudable and worthy of support. But if teacher salaries continue to shrink against inflation, we are effectively being asked to take yearly pay cuts. We are being effectively being asked to subsidize the cost of other district priorities out of our own personal finances–subsidizing the district budget with our personal debt, with living in studio apartments into our late 30s, with having to tell our children we can’t afford their college tuition payments, with deciding we can’t even afford to have children of our own. That is not fair. That is not right.

Every day I hear from teachers about how impossible it is becoming to stay in this profession.

A teacher with TWO MASTERS DEGREES tells me she has to sub for other teachers an average of 17 hours per month to make enough money to manage.

Many other teachers work a second or even third job–some are waitressing, or tutoring at night, or drive for Uber.

A first-year teacher who is deeply beloved by his students told me today “I have not been able to find even a studio apartment that I can afford to rent by myself on my teacher’s salary. Home ownership is completely out of the question. I love teaching and I love my students, but at this point, I am looking at moving out of the Bay Area or leaving the teaching profession altogether….once our veteran teachers, of whom there are many, retire, who is going to replace them?”

One of those veteran teacher wrote to me today to tell me “Did you know that the teachers at Palo Alto Unified School district (and many others in the Bay Area)make $20-$30 thousand per year more than Piedmont teachers at the same salary step with the same benefits?

Did you know that a 30 year old college graduate working in the Bay Area makes the SAME amount of money as a PUSD teacher with 20 years experience and a master’s degree?

Did you know that the private school financial aid application form, colleges automatically assume a 5% increase in annual salary for parents applying for their child’s financial aid? . . .Every year I stay, I am further behind in what I can afford.”

Right now, as we’re trying to attract new hires, I’m hearing from multiple departments that multiple promising candidates who have scheduled interviews call to cancel because they’ve had a look at our salary schedule.

We have a record number of teachers having to take on a teaching overload–a sixth class on top of the regular load of five–because the district can’t attract anyone from outside to take the job. That is burning out our teachers, and it is far from the ideal situation for our students, who need their teachers to have time and focus for them.

In a year of a record State budget surplus, this district MUST find a WAY to give its teachers a 7.5 % raise.”

One thought on “Teachers rally for COLA raise”