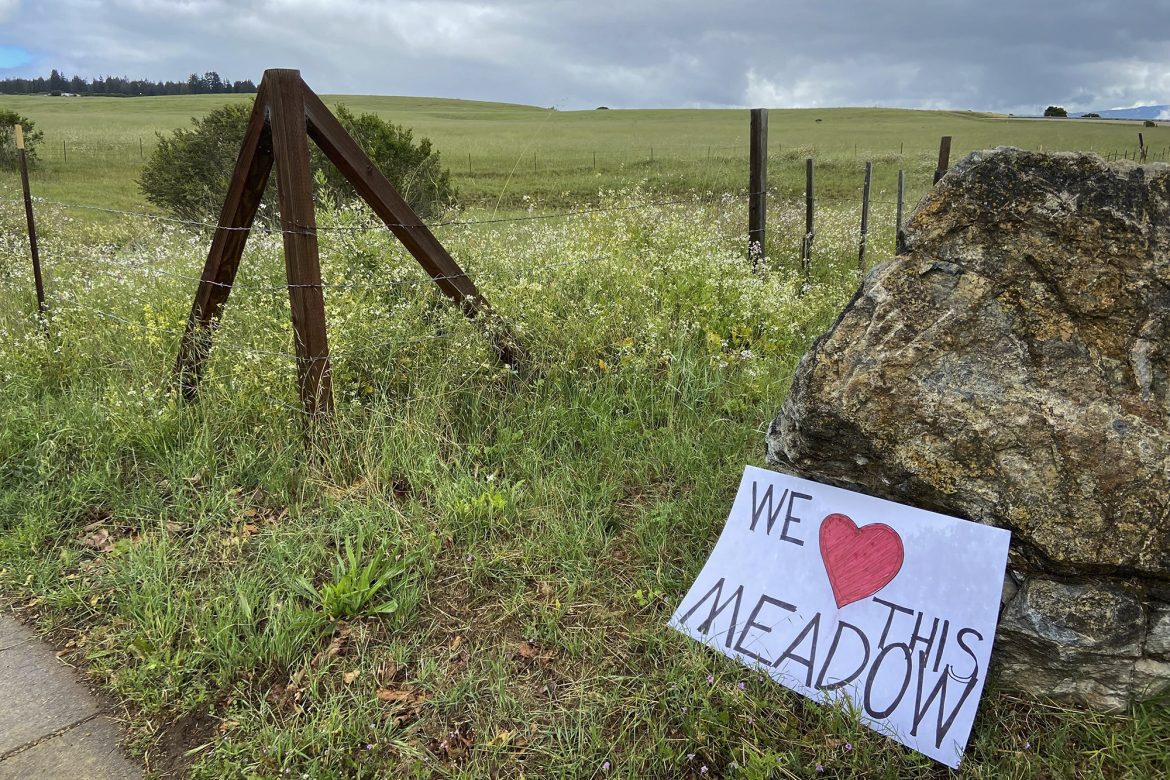 The location of a proposed UC Santa Cruz project. Photo by Ryan Loyola for CalMatters

After studying at home during the pandemic, University of California Davis junior Michelle Andrews tried to find housing in the city of Davis when in-person classes resumed last fall.

On-campus housing was scarce; UC Davis only guarantees dorms for freshmen. Off-campus houses listed on Zillow received mountains of applications within days, with rooms close to campus going for as much as $1,800 per month.

So she ended up living with family in Woodland, 11 miles away. That distance made her miss out on spontaneous meetups with friends, she said, and made college feel a lot more like a job than it should.

The disappointment inspired Andrews, the legislative director for UC Davis’s student government, to advocate for new legislation that would fast-track university housing developments at UC, California State University and community colleges by getting rid of a secondary review currently required under the California Environmental Quality Act.

The bill comes as California is facing a massive campus housing shortage, forcing some students into long commutes from home or living in hotels. Five percent of UC students, 10% of CSU students, and 19% of California community college students reported experiencing homelessness in recent surveys.

Universities trying to build more housing have run into pushback from residents and environmentalists concerned about the impact on surrounding communities.

Often, opponents invoke the California Environmental Quality Act, which was signed in 1970 by then-Gov. Ronald Reagan and requires state agencies to analyze the environmental impact of proposed projects and mitigate potential damage.

CEQA lawsuits against UC Davis claim that its Aggie Square development, which would include four academic buildings and at least 200 beds, would bring gentrification throughout Sacramento’s Oak Park neighborhood. Lawsuits against UC San Diego allege that the Theatre District Living and Learning Neighborhood, which could add 2,000 new beds, would increase vehicle traffic in the area. UC Santa Cruz’s 3,000-bed Student Housing West project has faced charges that it would decrease the natural beauty of the campus and impact critical species such as the California red-legged frog.

“This has been a longstanding tool, this use of CEQA, to engage in battles to try to restrict campus growth,” said Jennifer Hernandez, an environmental and land-use lawyer of more than 30 years based in San Francisco and Los Angeles.

Student government representatives and other student housing activists are increasingly working with organizations such as California YIMBY to push lawmakers and universities to speed up housing developments.

“It’s good that more students are being part of our higher education system, but we have to make sure that we have housing for them,” Sen. Wiener said of the bill, which the Senate Environmental Quality Committee passed unanimously last month.

But advocacy groups opposing the measure call it a blow to vital environmental regulation that fails to address the fundamental causes of the student housing crisis — poor planning by universities and insufficient investment.

“Students need safe, affordable and healthy housing, but (weakening) CEQA is not a magic bullet and will instead further deteriorate protections for our most vulnerable communities,” warns a joint letter from the California Environmental Justice Alliance and the Leadership Counsel for Justice & Accountability.

If universities don’t have to disclose details of student housing projects, as CEQA currently requires, their reputations will ultimately suffer, said Paul Schoellhamer of the East Meadow Action Committee, a group that opposes the Student Housing West development at UC Santa Cruz and has sued it for allegedly violating CEQA.

“The party harmed here will be the general public,” Schoellhamer said. “Over time, the result of that will be greater public animosity toward the university.”

Under current law, a campus Long Range Development Plan, which contains a multitude of infrastructure projects, has to go through an environmental review. Once the long-term plan is approved, individual housing projects must undergo a second review — the stage where housing projects are more likely to encounter lawsuits.

If SB 886 passes, that second review would be eliminated. Universities would still need to prove their developments meet certain environmental standards, such as not being located in flood hazard areas and high-risk fire zones.

Senate Bill 886 is co-sponsored by the student governments of UC and the California Community Colleges, California YIMBY, the California Faculty Association and the State Building and Construction Trades Council. The Student Housing Coalition, a new organization that sprung up at UC Santa Cruz in 2021 in the hopes of finding solutions to the campus’s housing crisis, is also a co-sponsor.

The coalition’s president, freshman Zennon Ulyate-Crow, has two years of guaranteed on-campus housing. Theoretically, he has some time before fretting about finding an apartment.

But that’s not how looking for housing in Santa Cruz works. From his first moments on campus, he’s been hearing horror stories from people who don’t have access to on-campus housing.

“I remember my first day of class, one kid was talking about how he wasn’t able to sign a lease on time. And he was a junior, so he couldn’t get housing on campus, and that meant he had to commute over two hours each way just to come to this one discussion session because he was living with his parents in Redwood City,” Ulyate-Crow recalled.

Ulyate-Crow and other student housing advocates say the current environmental review process is duplicative. And while some lawsuits are unsuccessful and projects can move forward, they say, delays still reduce the amount of available student housing.

“Delays on those sorts of projects would mean that there’s a longer interim period where we’re not getting our new and improved and increased number of beds,” said UC San Diego sophomore Ian Fosth.

Ire over CEQA among housing advocates came to a boiling point after UC Berkeley announced earlier this year that it would potentially be forced to reduce the number of students it enrolls by 2,600 due to a lawsuit. Local neighborhood group Save Berkeley’s Neighborhoods argued that the university did not address how additional enrollment would take a toll on the city’s services, noise and housing scarcity.

A judge sided with the neighborhood group and ordered Berkeley to cap its enrollment for the coming year. But the Legislature quickly moved to pass a bill barring the use of enrollment as a basis for lawsuits under CEQA. As a result, UC Berkeley went ahead in offering its intended number of admission letters.

The outrage from the UC Berkeley lawsuit is causing a shift in the California political landscape and getting people to understand the ways CEQA can be problematic, said Brandon Yung, a UC Berkeley senior and chair of the ASUC Housing Commission.

That opens up the space to achieve “forward-thinking, incremental benefits to student housing production,” Yung said.

But it’s unclear how helpful SB 886 will be in expediting student housing projects currently underway, since the exemption can only be applied at the start of the planning process.

Richard Flacks, chairperson for Sustainable University Now in Santa Barbara, said he’s not sure what problem the bill is trying to solve and is wary about the motivations behind it.

“Is the purpose of the bill really to improve UC performance on housing?” he said. “Or is it to water down CEQA on a more general level?”

Flacks added that his group was initially concerned that the bill would provide a loophole to expedite Munger Hall, the controversial 11-story mega-dorm where 94% of residents would not have windows. But he said the argument against that project is that it doesn’t conform with the university’s original long-range plan — so he says it wouldn’t qualify.

At UC Santa Cruz, the proposed Student Housing West was initially scheduled to open in 2020 but is bogged down in lawsuits and has yet to break ground.  The project may not qualify for an exemption since some of the legal challenges stem from the university’s long-range plan, said Santa Cruz County Supervisor Ryan Coonerty, whose district includes the campus.

Coonerty also said that SB 886 is missing actual solutions to the student housing crisis, such as allocating more state money and requiring universities to build housing before growing enrollment.

“If they’re serious, put the money up and build the housing,” Coonerty said.

Lawmakers have recently moved to provide more funding for student housing. The Senate’s budget proposals for the 2022-23 year include $1.5 billion to expand student housing and Assemblymember Kevin McCarty has proposed a $5 billion revolving loan fund that universities can use for building. Meanwhile, the legislature has already approved up to $2 billion over three years toward affordable student housing.

Wiener said he doesn’t think that CEQA is the main inhibitor to building housing, but one of a plethora of forces that prevent construction. Still, he says SB 886 is one tool that public universities and colleges across the state can use.

State senators at the April 27 committee hearing added more restrictions on which student housing projects could qualify for exemptions under the bill: They must have no more than 33% of the square footage used for dining, academic or student support spaces, be within half a mile of a major transit stop or the campus boundary and must conform to their university’s overarching long-term development plan.

The bill is scheduled to be heard by the Senate Appropriations Committee on May 16. It would need to pass both houses of the Legislature and be signed by Gov. Gavin Newsom to become law.

While lawmakers on the environmental committee voted to advance the bill, they also had their reservations. Some pointed out that simply putting the fault on CEQA takes away blame from individual universities. They argue that they aren’t against student housing, but are trying to hold universities accountable for failed promises of building more dorms.

“I don’t want to be here in seven years after this bill expires and have no student housing because the UCs and CSUs haven’t gotten their act together on doing it,” said state Sen. Bob Wieckowski, a Democrat from Fremont. “So please, UC and CSUs, spend some work on your long-term plans.”