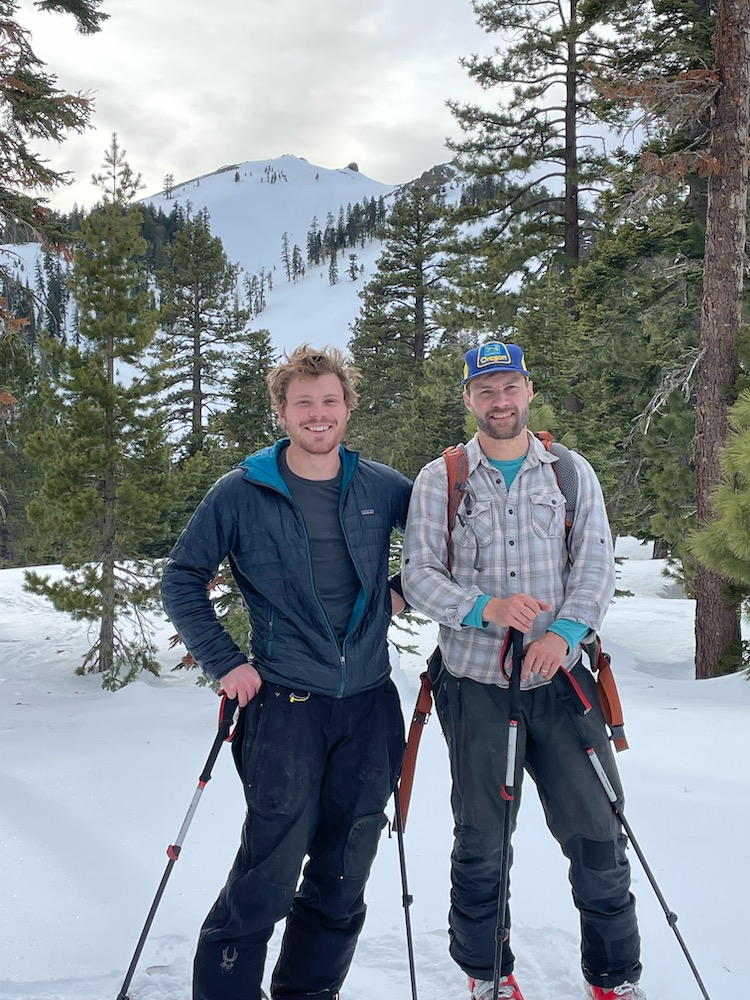 Youngest sons carry a heavy load. Twice so in families of all boys. The hand-me-down clothes, being relegated to the back of the chow line, enduring the vise-grip of an older brother’s headlock – these are just a few of the eternal rites of brotherhood, and the way boys bond. One of the wonderful things about Kye Moffat was his way of carrying these weights, and others, as if they were as light as air.

Kye, 25, passed away last week in a solo skiing accident at Palisades Tahoe. He was an expert skier who had spent half of his life in the Tahoe area.

The shock of Kye’s sudden passing rippled all week between Tahoe, Middlebury College in Vermont where he was a top soccer player, and here in Berkeley, California where he had deep roots. Kye grew up in Berkeley, attending Montessori Family School and  Berkeley High School, as had his older brothers Corey and Keith. Those schools’ beautiful mosaic of people left their imprint on the boys, each of whom went on to master the art of making meaningful connections with people anywhere they go in the world.

The boys’ dad, David Moffat, an architect and editor, and mom, Wendy Walker, a college admission counselor, had met as college classmates. During their twenties they both ranged the world – southeast Asia, Europe, the Pacific northwest of the US — before reconnecting, marrying and moving to north Berkeley in the 1980s. Their stories inspired all three sons to explore. Corey lived and worked in Namibia, the Central African Republic and South Africa for two years before going to law school and joining the California Attorney General’s Office.

Keith was an alpine skier and member of the US Ski team who competed in South America and Europe. He is now finishing his PhD in electrical engineering at UC Berkeley. Sometimes the glare of family success can be daunting for a younger brother searching for his own path, but Kye genuinely reveled in his brothers’ triumphs, and shared it with them, as they did his. As a high school senior Kye was nominated for several academic prizes — the Regents’ and Chancellor’s scholarship at UC Berkeley and the President’s scholarship for the University of California system, but he chose to attend Middlebury College as a recruited soccer player. He played four years on the varsity team in three NCAA division 3 championship tournaments.

But what most of us will probably remember about Kye is that he was blessed with an exceptional warmth and sensitivity that drew people to him. This was true whether he was at home waiting in line outside the Cheese Board collective in Berkeley, or in Tahoe patiently showing my 5-year-old daughter how to play foosball on her first trip to California, or while still in high school flying unaccompanied to the other end of the globe to spend a semester in New Zealand studying, skiing, surfing and making countless new friends. And all pulled off without worrying his mom too much. It was this uncommon mix of things – homebody and adventurer — that lived in Kye. For all the touch-feely stuff, Kye didn’t finally stop growing until he was 6’3” and 215 lbs. Although he had the stature of a moose he was always a steadfastly peaceful guy of whom no one could remember ever seeing throw a real punch. Still, only a fool would have picked a fight with him.

After graduating Middlebury in 2019 with a degree in geology Kye moved back to the Bay Area and began working at Deep Isolation, a Berkeley firm that develops and promotes innovative means of disposing of nuclear waste, a thorny problem in that any safe disposal container needs to last 20,000 years or more. At Deep Isolation Kye rose quickly to become Senior Technical and Product Analyst. Recently, he and the company co-founder, a former Cal physics professor, filed a Provisional Patent for a work they named Snug Canisters for Storage and Disposal of Waste.

A little more than a week ago, Kye was the center of a large group of close friends who had come together to go skiing. Most of them Kye had introduced to the pleasures of Palisades Tahoe. A few days earlier a fluke early spring storm had left several feet of new snow. On the afternoon of April 23 Kye was on his skis and enroute to a college friend’s house under the funitel at Palisades Tahoe — a lovely route that had been taken by countless others that day judging by the tracks left in the snow. Kye suddenly encountered a spot where the snow had melted away. He struck a rock and left this world instantly.

Everyone can only hope when their last page is written that we are surrounded by people we love, or we are doing something we love. Kye’s parents David and Wendy Moffat said this: “Kye died at the end of a beautiful spring day doing one of the things he loved most in the world with a large group of friends from the many spheres of his life at a place he had never not known. He will be greatly missed.”