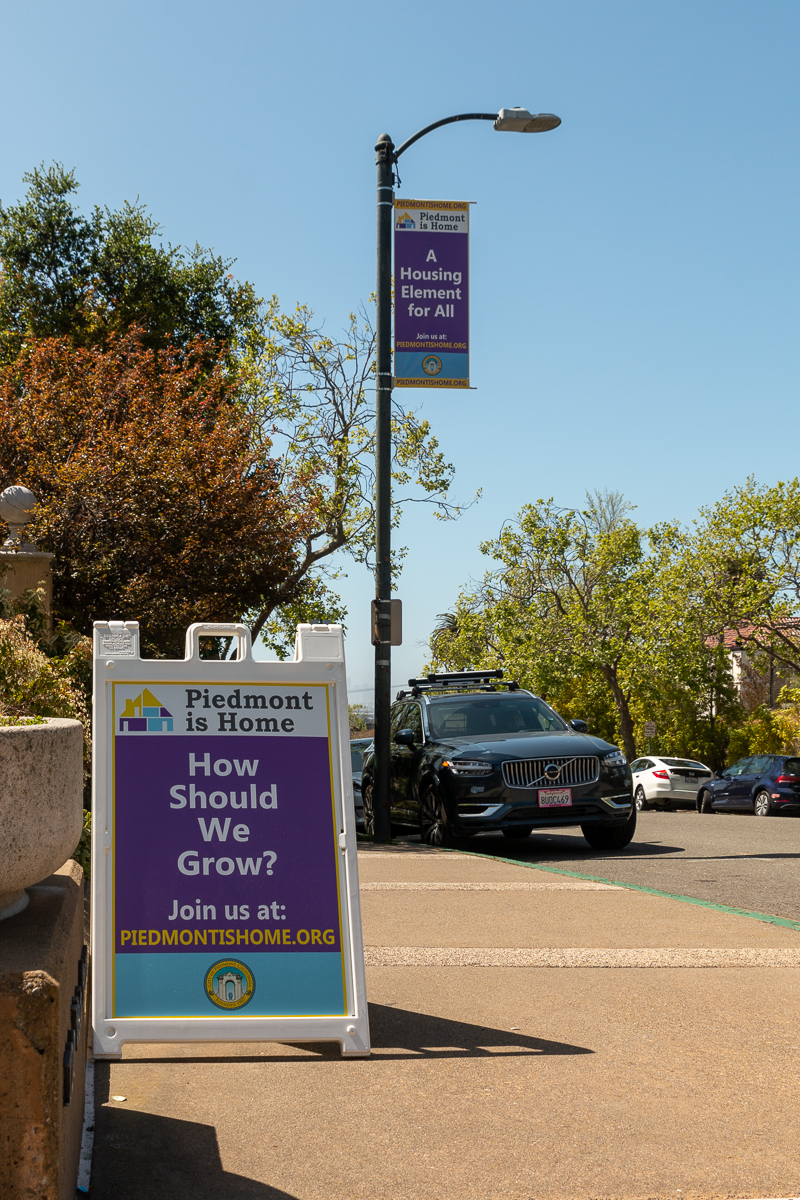 The city has hung banners around town highlighting its efforts to comply with new housing requirements.

After making a handful of adjustments, the Piedmont Planning Commission on May 12 approved sending the Draft 6th Cycle Piedmont Housing Element — an eight-year plan for accommodating Piedmont’s share of regional housing growth, starting in 2023 — to the City Council for its consideration.

Consideration of this state-mandated Housing Element document would likely come at one of the council’s June meetings. The council could then authorize city staff to send the document to the California Department of Housing and Community Development (HCD) for its review — likely the first of several before a final document is due in May 2023.

This 374-page Housing Element plan is Piedmont’s sixth, and by far its most challenging, requiring the city to prepare to accommodate 587 new residences by 2023. This is almost 10 times more housing units than the state called for in Piedmont’s previous Regional Housing Needs Allocation (RHNA) cycle, from 2015 to 2022, which called for 60 new residences in Piedmont.

Cities’ housing elements must identify how each city will accommodate its “share” of the need for regional housing — how and where safe, accessible, and diverse housing could be developed, at various income levels. State law does not require cities to build or finance new housing, but to create plans for accommodating it.

And David Bergman, a consultant working with the city, told planning commissioners that a new attorney general’s Housing Enforcement Office intends to gain cities’ compliance more effectively than in the past, via threats of legal action.

Adjustments made May 12 involved assigning all identified potential new Piedmont housing sites equal priority, as to not focus new housing development in any one area; establishing minimum housing project sizes (in numbers of housing units) that must include some affordable units; and an intent to require accessory dwelling units (ADUs) be built on approved housing projects on lots over a yet-to-be-established size.

Though city officials have said the city would likely have to provide land for some housing projects, Planning Commissioner Justin Zucker said the city only has so much public land.

“The only way we’re going to get affordable housing is either by building it or having it included in larger projects,” Zucker said shortly before the commission’s 5-0 vote.

There have been 15 different public meetings in Piedmont over the past year-plus at which the Housing Element has been discussed, and public comment on it gathered. As at most of these hearings, most public speakers at the May 12 meeting told the commission they supported the essence of the work that has gone into the draft Housing Element, and embraced the idea that the city should do whatever possible to provide more affordable housing. That, several speakers said, would make Piedmont a more diverse city, both culturally and socio-economically. Several said it’s time for Piedmont to make that move, especially given the city’s long history of “redlining” and other practices that kept people of color largely out of Piedmont for decades.

“Leadership on this issue will be a badge of pride for all of us,” said resident Kristin Harknett.

Added Ronna Kelly, “It’s time for us to stop living in our bubble and take some responsibility for this regional homelessness crisis.”

Doing this will be a significant challenge, many say, given Piedmont’s lack of developable parcels, and high land prices that don’t generally offer builders a financial incentive to build “dense” housing.

Though Blair Park has been categorized in this draft only as a “potential alternate site” for housing, there was much discussion of it on May 12 as a site for multifamily housing. But Commission Chair Rani Batra said she was concerned recommending Blair Park for housing would set a bad precedent concerning Piedmont’s park lands.

Some public commenters stressed that the whole of the city, all its neighborhoods, need to absorb some of these units. John Malick, a Piedmont-based architect, brought images of five multifamily units spread around Piedmont. “They fit in seamlessly.”

The Draft 6th Cycle Piedmont Housing Element, which will still be able to be further refined and adjusted, can be viewed at https://www.piedmontishome.org