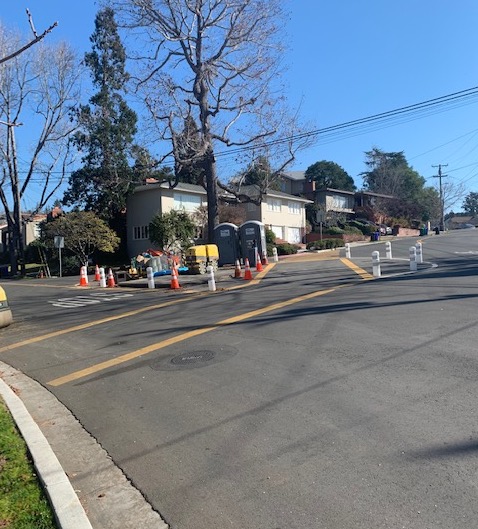 View of the safety bollards at Magnolia and Nova

Almost three years after a “temporary” fix at a broad residential intersection in lower Piedmont was installed, discussions about what’s next for the intersection of Magnolia Avenue and Nova Drive are set to resume later this month. The bollard installation has worn out its welcome with neighbors who live nearby.

Residents who live near that intersection, near where Wildwood Avenue also joins in, said they’ve been trying to make something happen there since soon after temporary safety measures were approved at that intersection in April 2019 and installed the following July. Similar traffic-calming measures incorporating bollards were approved at the same time for Grand and Fairview Avenues and Oakland and Greenbank Avenues, as part of a larger project that included bulb-outs along Oakland Avenue at the intersections of El Cerrito Avenue and Jerome Avenue.

But residents near Magnolia and Nova want something more substantial, and two of them told the City Council on May 2 that they’re losing faith in the process, and losing patience. Mary Wells and Lyman Shaffer, who live near the Magnolia-Nova intersection, told the council they want more than the “temporary” bollards there, the short plastic posts that divert traffic. Rather than make the intersection safer, Wells and Shaffer said, the layout has confused drivers more than protected them. Wells described the intersection as “dysfunctional;” Shaffer said the bollards have created “poor sight lines” that make a left turn from Magnolia onto Nova dangerous. And Wells said the crosswalk there isn’t safe, either.  Shaffer called what’s there now a “bollard island” in the middle of the relatively expansive pavement at the intersection. He said he’s seen kids playing in that “island” area, too.

One hundred twenty neighbors have signed a petition imploring the city to make substantial permanent improvements at Magnolia and Nova a priority.

City Councilwoman Conna McCarthy said last week that she and Councilwoman Jennifer Long have scheduled a May 25 meeting with Daniel Gonzales, the city’s public works director, to discuss what changes can be made at Magnolia and Nova, and how to move forward.

“The Wildwood, Nova and Magnolia neighbors expressed legitimate safety concerns to the council,” McCarthy said in an email. “They have understandably lost patience looking to the city for resolution.”

Gonzales said he first met with residents in April 2021, and soon after that a red curb was added on the south side of Magnolia, which he said “significantly enhances the performance of the intersection.” But Gonzales acknowledges resident complaints about the intersection have persisted.

A design for a roundabout at that intersection was evaluated, Gonzales said, but rejected because it would result in at least 20 parking spaces being lost. Landscaping options for the intersection were also discussed; Wells and Shaffer said a resident near the intersection has said he would take care of the landscaping once an acceptable design has been agreed to.

But after two community meetings and several other meetings between neighbors and city officials, there have been no other substantive changes at the intersection. Wells and Shaffer said that, until McCarthy contacted them on May 5, it had been almost six months since they had heard from the city.

“It hasn’t been a high enough priority for the city, and I think this should have been resolved two years ago,” said Shaffer, for four years a member of the city’s Public Safety Committee.

Gonzales said he believes a good design for “intersection performance,” which doesn’t include landscaping, has been achieved. He also said a funding request for the performance improvements is part of the city’s 2022-2023 budget, as part of the five-year Capital Improvement Project. The first scheduled public budget session is Saturday, May 21  starting at 9:30 a.m. at the Piedmont Police Department’s Emergency Operations Center, 403 Highland Ave.

Wells said she’s glad to see some movement on this issue. “I would say that we’re pleased that the council is finally taking notice of this troubled intersection,” she said.

(This article was updated with new petition numbers on May 13.)

9 thoughts on “City to address ‘bollard island’ in lower Piedmont”