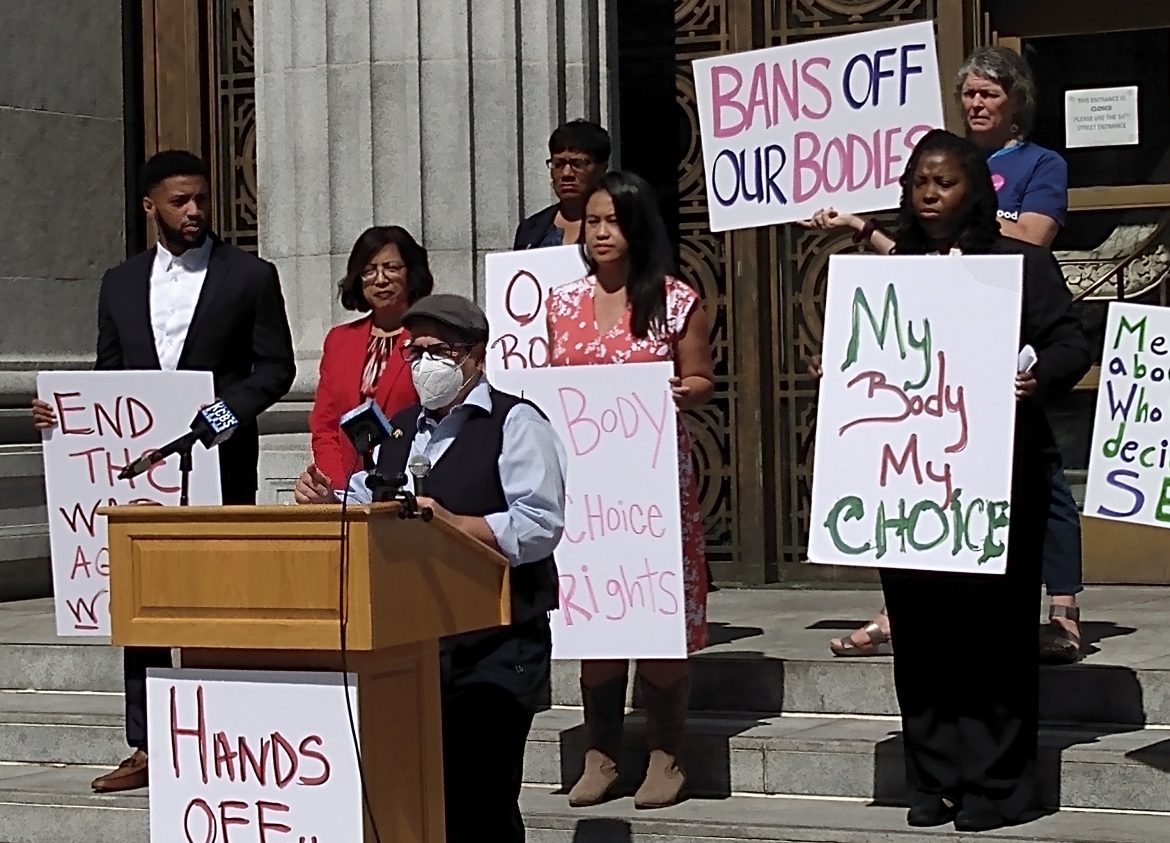 Vice Mayor Rebecca Kaplan speaks to reporters May 17, 2022, in from City Hall in Oakland, Calif. about a resolution to make her city a sanctuary for people seeking an abortion (Keith Burbank/Bay City News)

The legislation is in response to the potential that the U.S. Supreme Court will overturn Roe v. Wade, which was decided in 1973 and made abortion legal in the U.S. Two weeks ago, a leak by the high court suggested it was going to overturn the landmark decision.

The resolution says Oakland is a right-to-choose city, demand that state and county leaders provide enough money for abortions and other reproductive health care and encourage national leaders to codify in federal law the right to an abortion.

“This is a right to our democracy,” said City Council President Pro Tempore Sheng Thao, the chief sponsor of the resolution and an Oakland mayoral candidate, at a news conference Tuesday morning in front of City Hall. “More women will die” if abortion is illegal, she said.

Co-sponsoring the resolution is council President Nikki Fortunato Bas and Vice Mayor Rebecca Kaplan, who is running for Alameda County supervisor. Thao said the issue is personal for her, because when she was raising her son, she used the health care and family planning resources at Planned Parenthood.

Ever since the Supreme Court leak, activists in the Bay Area have been responding with a variety of actions. On Saturday, thousands of people marched and rallied in San Francisco in support of reproductive rights and a San Mateo County supervisor issued a statement in favor of pro-choice sanctuaries.

Oakland councilmembers will vote to declare that “anyone should have the right to abortion, on-demand and without question.” They will also vote to urge the state of California and Alameda County to expand funding for abortion access and reproductive rights.

Kaplan said abortion and contraception should be legal and available. She cited recent work by Santa Clara County Supervisor Cindy Chavez to give $3 million to Planned Parenthood, something Kaplan would like to see Alameda County do. Kaplan said funding needs to be available for California residents who want an abortion and out-of-state residents who may need to come to California for one.

Thao’s resolution also throws the council’s support behind U.S. House Bill 3755, which would codify the right to an abortion into federal law. House Bill 3755 is also known as The Women’s Health Protection Act of 2021. The bill passed the House of Representatives in September but failed to get enough votes to pass in the U.S. Senate in February. The bill would prohibit government restrictions on access to and the provision of abortions. The bill has 215 co-sponsors, including Rep. Barbara Lee, D-Oakland, who supports Thao’s resolution before the Oakland City Council.

The resolution was echoed in political action elsewhere in the region. San Mateo County Supervisor David Canepa issued a statement following the Redwood City Council’s request the county create a buffer zone at the Planned Parenthood clinic in unincorporated Redwood City. The clinic falls under the jurisdiction of San Mateo County.

“With a continuing assault on women’s reproductive rights, we need to create ‘Pro Choice Sanctuaries’ and ‘Buffer Zones’ at abortion clinics to protect the privacy and rights of the women who are seeking reproductive patient care, even if they are coming from out of state,” Canepa said. The county should work with cities to create buffer zones at every health care clinic in the county that provides reproductive health care, he said.

Bas said her message is simple. “Health care is a human right,” she said. “And abortion access is health care.”

Bas said people must push back so that racism and white supremacy, patriarchy and sexism have no place in society.

Kaplan concurred. “Let us continue to move forward and not backward,” she said.

This story was updated to reflect that the resolution passed Tuesday evening.